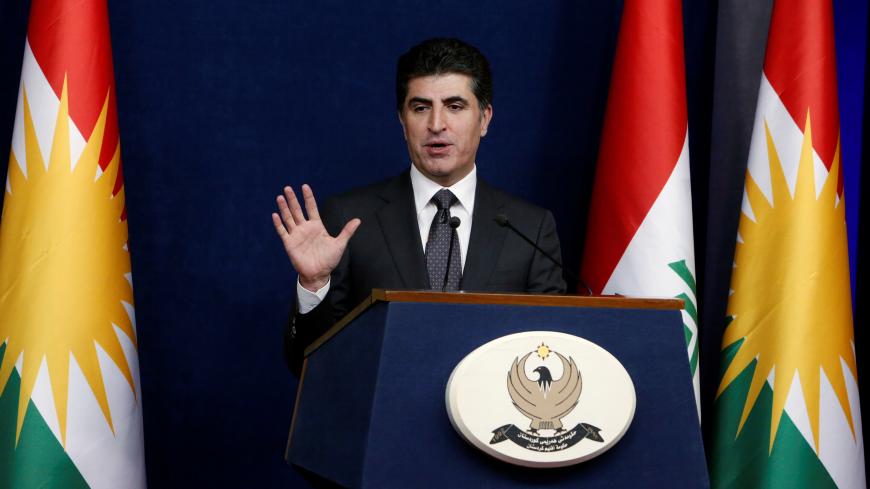 BAGHDAD — President Nechirvan Barzani of the Kurdistan Regional Government (KRG) left Erbil for the first time since taking office and headed to the Iraqi capital on June 20 to discuss several outstanding issues with the central government, especially KRG oil exports, the public budget and the situation in the disputed city of Kirkuk.

After meeting with Iraqi Prime Minister Adel Abdul Mahdi, Barzani said they agreed to resolve outstanding issues based on the constitution and to convene a joint committee next week to negotiate oil, the budget, the peshmerga forces and Article 140 of the Iraqi Constitution, concerning a census in Kirkuk.

The most important issues addressed during the visit were Kurdish oil and KRG salaries. Baghdad has not yet received its share of KRG oil in about six months, but the federal Ministry of Finance continues to deliver salaries to KRG employees. This discrepancy has raised the ire of Arab parties, who hinted that next year's budget could depend on the economic relationship between Baghdad and Erbil.

Per its 2019 budget, the Iraqi government pledged to pay KRG employee salaries in exchange for the delivery of 250,000 barrels of oil per day to the Iraqi national oil company. But the KRG has recently abstained from delivering oil.

In this regard, Barzani told Anadolu Agency, following his talks with Baghdad, “I have spoken with the prime minister about this issue and we need to talk more about it. The problem does not lie in delivering 250,000 barrels, but there are legal issues, since cutting the KRG’s share of the 2014 budget has put it under a lot of debt.”

Barzani also met with parliamentary speaker Mohammed al-Halbusi June 20 and discussed the oil issue. Halbusi noted in a statement, “We discussed the KRG’s financial obligations, including selling oil in virtue of the 2019 federal public budget. We addressed the importance of strengthening ties between the KRG and the federal government, as well as resolving all outstanding issues in the spirit of fraternity and national partnership.”

These statements reflect Barzani and Abdul Mahdi's failure to find solutions, even though committees to resolve crises were formed.

Parliamentarian Sherwan Dobradani of the Kurdistan Democratic Party told Al-Monitor that a delegation of multidisciplinary government officials headed by Abdul Mahdi will visit the KRG in the coming weeks to resume discussion of the outstanding issues, oil included.

“The results can indeed be positive once the joint committees finish their work," he said. "It is possible to find solutions that please all parties.”

According to local media, Barzani asked Baghdad to withdraw its lawsuit against Ankara. The Iraqi federal government sued Ankara in 2015, requesting compensation from the Turkish government for $26 billion for its importing of Kurdish oil without Baghdad's consent. Barzani headed directly to Ankara after visiting Baghdad to discuss a number of issues, including the oil crisis and the Kurdistan Workers Party, or PKK.

Parliamentarian Faleh Ziadi told Al-Monitor, “The Iraqi prime minister and the federal Ministry of Finance are collaborating with Erbil to settle the issue of oil supplied to Turkey without taking into account the Iraqi laws. Baghdad compensating oil companies operating in the KRG or withdrawing the lawsuit against Ankara would mean conceding the rights of the rest of the Iraqi components and the principle of social justice.”

Ziadi, a member of the Finance Committee, suggested that the consequences of those measures would be “severe when demonstrations against the government break out and the budget law for next year is adopted.”

A source familiar with the negotiations told Al-Monitor on condition of anonymity, "The Kurdish delegation suggested to Abdul Mahdi to revive the agreement to share Kirkuk between Baghdad and Erbil or to allow the KRG to export oil until oil companies are completely compensated and then commit to hand over the 250,000 barrels to [the state oil company]."

The source added that Abdul Mahdi, who has good relations with the Kurdish parties, does not mind giving Erbil time to pay off the debt, but he will be in a critical position with the Shiite blocs that have so far rejected these solutions. Such solutions will necessarily include the peshmerga returning to Kirkuk and the withdrawal of the Popular Mobilization Units. No solution is expected to be reached soon, he said.

Kurdistan Alliance bloc leader Mohsen Saadoun told Al-Monitor over the phone, “Activating the joint security administration of Kirkuk is constitutional because it is from the disputed areas, and any delay in that will further complicate the situation there.”

Saadoun said, “The KRG is keen on working with Abdul Mahdi’s government to end all outstanding issues by referring to the constitution and previous agreements between both parties.”

Baghdad and Erbil's problems and economic issues need a comprehensive settlement, including Baghdad letting certain KRG commitments slide for the moment. However, other parties in the federal government may seek a political reward, perhaps in support of Abdul Mahdi, who is the target of criticism and could lose his government's confidence. Otherwise, the crisis will only escalate as next year's draft budget approaches.