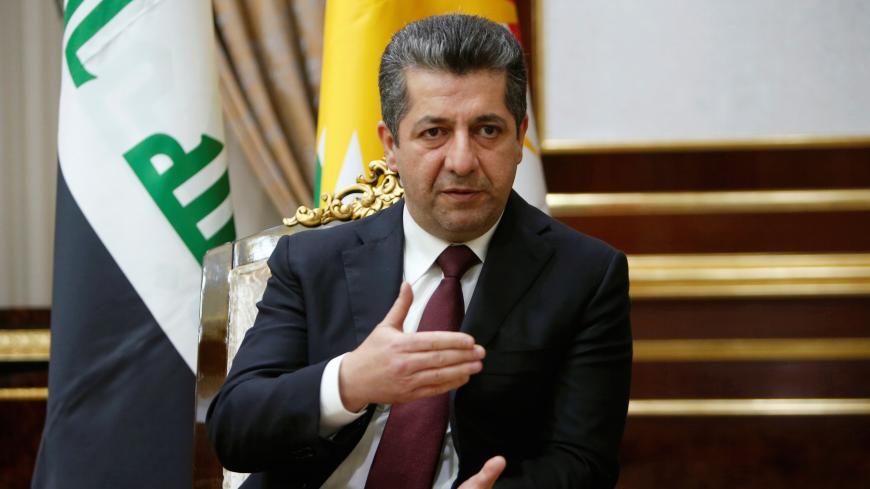 Adel Abdul Mahdi’s Iraqi caretaker government in Baghdad April 16 has ordered its Finance Ministry in an official document to cut federal budget contributions to the semi-autonomous Kurdistan Regional Government in Erbil, pushing the KRG toward bankruptcy and cutting off the payment of salaries to its civil servants.

Abdul Mahdi’s government said the step was taken due to the international oil decline that has hit Iraq hard as well as Erbil’s failure to submit 250,000 barrels of oil per day to Iraq’s State Organization for Marketing of Oil (SOMO) in return for public funding under Iraq’s 2019 budget law. Iraq continuously sent federal budget appropriations to Erbil throughout 2019, although the KRG has not delivered a single barrel of oil to SOMO. The document also calls for there to be a settlement on long-standing financial issues between Baghdad and Erbil that date to 2004. Erbil says Baghdad’s decision is illegal and a political measure against Kurds.

More than 90% of Iraq's budget depends on oil revenues; these monies are used to pay millions of public sector employees. But the country is facing unprecedented financial, political, and social crises due to the dramatic decline of Brent crude oil to around $27 a barrel, growing coronavirus mortalities, political conflicts on forming a new government, a resurgent Islamic State insurgency and rampant administrative corruption.

KRG Prime Minister Masrour Barzani, in a statement following his meeting with UN special representative to Iraq Jeanine Hennis-Plasschaert, said cutting the KRG’s share from the Iraqi budget was “political pressure against the people of the Kurdistan Region.” The president of the Kurdistan region, Nechirvan Barzani, described Baghdad's decision as “unconstitutional and unlawful,” saying the KRG budget and salaries must not be “politicized.”

“Baghdad has sent salaries of January, February, and March to Erbil to be distributed among the KRG employees,” Ahmed Haji Rashid, an Iraqi lawmaker from the Kurdistan Islamic Group and reporter of the parliamentary finance and economy committee, told Al-Monitor. This is more than 1.3 trillion Iraqi dinars, or more than $1.1 billion.

However, the KRG has yet to pay January salaries to its employees. Some Kurdish lawmakers previously accused the KRG of using the money Baghdad sent for public salaries to instead pay off money the KRG owes to international oil companies working in the region. The financial crises, coupled with a monthlong lockdown due to the coronavirus, have caused unemployment to skyrocket; KRG health personnel also went on strike, even though new COVID-19 cases are being recorded, because they had not been paid.

Iraqi President Barham Salih on April 9 named Mustafa al-Kadhimi as Iraq’s prime minister-designate soon after Kurdish officials announced their support for Kadhimi. Kadhimi sent a seven-point government program to the Iraqi parliament April 29 in which he pledged to draft a new budget law for 2020 and help all the Iraqi citizens, including those in the Kurdistan region.

“We are ready not only to hand over 250,000 barrels of oil per day to Baghdad, but also to hand over the entire KRG oil product. But in return, Baghdad must commit to sending all the financial shares of the region and the entitlements of the oil companies operating in region’s oilfields,” Dara Rashid, the KRG planning minister, told a press conference in Erbil on April 26 following KRG officials' return from the first round of negotiations with Baghdad.

Ahmed Haji Rashid said, “Iraq’s economic conditions are very bad; the country can only pay its civil servants when it sells oil at $31 — that is, for the price of Brent oil to rise to $38.”

Kurdistan began exporting crude oil independently to world markets through Turkey starting in 2013, bypassing Baghdad’s consent. Hence, control of oil revenues has become a thorny issue between Erbil and Baghdad, and the KRG has not been getting the full 12.67% of the federal budget it is entitled to on the books.

KRG spokesperson Jotyar Adil told Al-Monitor, “No solution outside the constitution would be fair or end the disputes. We’re against politicizing people’s livelihoods and they should not be put into any political calculation.”

Adil said the drop in oil prices and the coronavirus crisis have caused the KRG’s income to “decrease by 75% if not more.”

He also said the KRG has pushed a “conclusive reform plan” along with multiple efforts, including negotiations with Baghdad to reach an agreement so that the KRG might provide salaries and other services to its citizens.

“Our delegation met with the Iraqi government’s delegation April 30, in which several suggestions have been discussed on the issues of oil and budget,” Talabani spokesperson Samir Hawrami told Al-Monitor via WhatsApp messaging from Baghdad. “It has been decided that the meetings will continue; in the near future another meeting will take place in order to reach a joint and comprehensive agreement.”

The KRG Cabinet met May 2 and Talabani briefed the council on the outcomes of their discussions with Baghdad.

“The KRG is committed to continuing dialogue with Baghdad to defend the Kurdistan Region’s constitutional rights. The delegation will return to Baghdad this week for follow-up,” read a statement published on the KRG official website. The KRG also decided to use local revenues to pay salaries and through recovering money it is owed by local companies.

A close source from the KRG negotiations in Baghdad, who spoke on condition of anonymity, told Al-Monitor that the meetings ended without any agreement.

“Iraqi officials have told Kurdish officials that the KRG should submit all revenues — including the region’s international airports as well as border gates — to Baghdad, and then receive a share of the federal budget,” the source said.  “Even if the Iraqi parliament were to approve Kadhimi’s Cabinet by next week [and officially make him prime minister], the KRG still should submit its entire income to Baghdad if it wants to survive.”