Baghdad sent a delegation, headed by President Barham Salih, to the Iraqi Kurdistan region to discuss the budget, oil and other contentious issues. 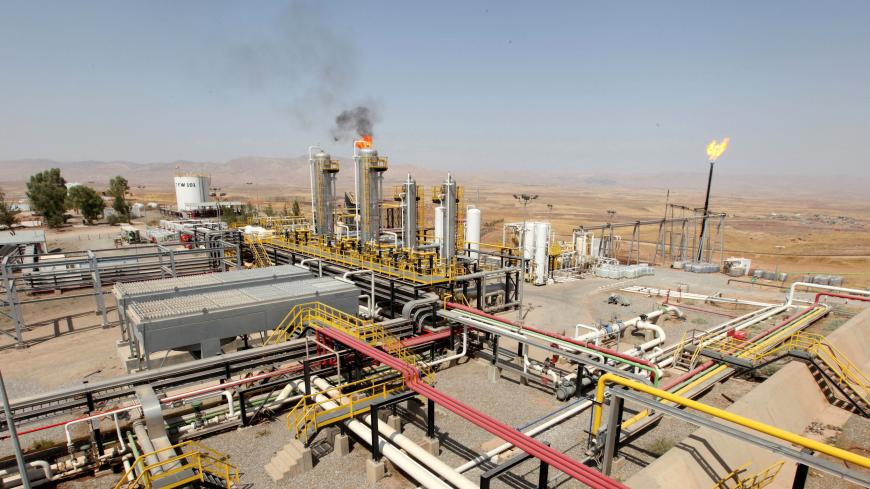 A flame rises from a chimney at Taq Taq oil field in Erbil, in Iraq's Kurdistan region, Aug. 16, 2014. - REUTERS/Azad Lashkari

The purpose of Salih’s visit was to warn the KRG about the region’s share in Iraq’s federal budget for 2020, scheduled to be passed by the national parliament by the end of the year. A well-informed source close to the ruing elites in both Baghdad and Erbil told Al-Monitor on condition of anonymity that the Iraqi president — who is Kurdish — cautioned the Kurdish leadership that the federal government in Baghdad will cut the Kurdistan region's share of budget, including salaries of the KRG employees, if Erbil fails to hand over a portion of its oil to the State Organization for Marketing of Oil. The organization is responsible for selling Iraq's oil.

Under the Iraqi budget law for 2019, the KRG agreed to send 250,000 barrels of oil per day to the state oil organization. Although Baghdad continues delivering funds to Erbil as per the 2019 budget law, the KRG has told Baghdad that it cannot hand over its share of oil, claiming it has obligations to pay back debts to international oil companies working in producing and importing the region’s oil. Because the KRG’s oil sector is not transparent, there is no official data available on the KRG’s local and foreign debts. However, some 2018 estimates indicated the loans were about $20 billion.

The head of the national parliament’s finance committee, Haitham al-Jubouri, said Sept. 23 that the Iraqi government has yet to send the draft budget bill to parliament. He said the committee will return the bill to the government if it includes large deficits.

Iraq is the second largest producer in the Organization of the Petroleum Exporting Countries and home to 12% of the world's proven oil reserves; 95% of Iraq's revenues come from oil production.

Jubouri said the country’s debt gas reached $125 billion. In part as a result, Iraqi Prime Minister Adel Abdul Mahdi is under increasing pressure from Iraqi opposition parties to require the KRG to either respect its financial obligations to Baghdad or see a drop in the KRG share of Iraq’s budget.

The source said the KRG asked Iran to appeal to Abdul Mahdi to continue sending funds to the Kurdistan region in 2020 and cover the KRG’s inability to submit the 250,000 barrels of oil per day, but that Tehran refused the request.

KRG spokesman Jutyar Adil told Al-Monitor, “The KRG has showed goodwill for reaching an agreement with Baghdad based on the Iraqi Constitution. For this purpose, we formed several technical committees.” Adil added, “There are some details that should be settled between both sides; the KRG believes that the issues can be resolved permanently.”

Asked whether the KRG could handle its financial issues if Baghdad cut all federal funds to Erbil, the spokesman said the KRG will respond to this if and when the funds are cut off.

Jamal Kochar, a Kurdish member of the national parliament's finance committee, told Al-Monitor, “The budget bill is a political debate. I do not believe the Kurdistan region’s share will not go below 12.67%, since data from the Iraqi ministries of planning and trade indicate the Kurdish population to be 13.9% of Iraq’s population.”

“I do not think Baghdad will cut salaries of KRG employees because such an action would support the Kurdistan region’s bid toward independence and economic independence from Baghdad; this is not the Iraqi state’s policy and the global coalition against the Islamic State would not tolerate that, ” he added.

He indicated that the Iraqi parliament will not be able to easily pass the budget bill with a reduction in the KRG’s share. He said that if the Kurdistan region’s share of the federal budget is reduced, Kurdish lawmakers will vote against the bill.

Mohammed Rauf, a professor of economics at Sulaimani University, told Al-Monitor that according to Iraq’s Constitution, the Kurdistan region’s share of federal budget cannot be cut, provided that the KRGs abide by the budget bill that is yet to be passed.

He said that the KRG did not abide by its obligations regarding the budget law for 2019, and that the Iraqi central government partially implemented its responsibilities toward the Kurds.

“If KRG does not start submitting 25,000 barrels of oil per day to Iraq in the coming months, then mutual trust between Baghdad and Erbil would vanish,” Rauf said, “Consequently, that might cause Abdul Mahdi’s government to stop sending any cash to Kurds, even if the Iraqi parliament passes the budget bill similar to this year’s formula. Still, Abdul Mahdi might continue sending the cash to Kurds.”

The economist emphasized that the KRG lacks a strong will to combat corruption, which, he said, is the culprit behind all of the Kurdistan region’s debts and financial woes.