What is the fate of Baghdad-Erbil’s oil-for-budget agreement amid ongoing protests? 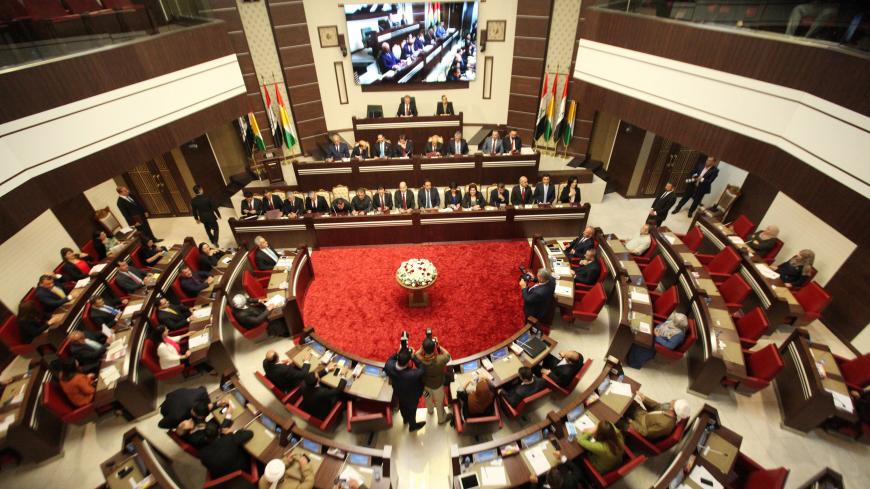 The Kurdistan Region of Iraq has vast proven oil and gas resources; however, mismanagement, corruption and ruling parties’ monopoly on power have brought the region to the brink of financial collapse amid longstanding controversies with the Iraqi government over the region's share of federal budget.

Following extensive negotiations, the Kurdistan Regional Government (KRG) announced Nov. 27 that a final oil-for-budget deal with the Iraqi federal government had been reached in which the KRG agreed to submit 250,000 barrels per day of crude oil to Iraqi State Oil Marketing Company in return for receiving a fair share of the country’s budget for 2020. The KRG currently produces 500,000 barrels per day, and has been exporting most of its oil independently through Turkey since 2013.

“The current government cannot sign any agreement either with the KRG or others, since it’s a caretaker government and does not have the authority to make deals, especially on oil and the federal budget,” said Mansur Al-Baeji, a lawmaker from former Prime Minister Nouri al-Maliki’s State of Law Coalition. He said that the next prime minister will have the authority to sign agreements with the KRG, and that the coalition would not allow the agreement between Erbil and Abdul Mahdi to pass the Iraqi parliament.

However, Iraqi government spokesman Saad al-Hadithi said the government remains a constitutional one and still has authority.

A number of parliamentarians from various political factions whom Al-Monitor tried to contact were not immediately available to comment on this issue.

One who did comment, Ahmad Haji Rashid of the Kurdistan Islamic Group, told Al-Monitor, “Before Adel Abdul Mahdi’s resignation, the Iraqi Council of Ministers had accepted the oil deal with the KRG and included it in Iraq’s 2020 budget bill.”

The bill is expected to reach the Iraqi parliament Dec. 15 and experience fierce debate.

The KRG has not respected its promise to submit 250,000 barrels of oil per day to the Iraqi State Oil Marketing Company as per the 2019 budget law, even though Baghdad continues delivering funds to KRG employees. The KRG claims it has responsibilities to pay back debts to international oil companies working in producing and exporting oil from the Kurdistan region to world markets. Abdul Mahdi’s soft stance with the KRG has engendered public rage against him and his Cabinet, which took office in October 2018. Rashid said Abdul Mahdi became the victim of both KDP and PUK as he did not refuse any demands of the two Kurdish parties.

Hadithi said Nov. 30 that the issue of the prime minister's resignation should have "no effects on the subject of completing the special measures for signing the agreement between the federal government and the KRG on oil and salaries of KRG employees within the draft 2020 budget law.” He told Al-Monitor, “The government continues with its duties and wants to finally sign this agreement. We hope to sign the final agreement soon.”

The Kurdish oil sector is paralyzed with corruption and monopolization by the two main ruling parties, the Kurdistan Democratic Party (KDP) led by the Barzani family and the Patriotic Union of Kurdistan (PUK) led by the Talabani family. While ruling party elites and supporters live in luxurious lives, most local citizens suffer from suffocating unemployment rates and shortages in basic public services, including housing, water, electricity, healthcare, education and fuel for heating.

The KRG’s negotiating delegation to Baghdad included Kar Group President Baz Karim, who is close to the KDP. While the Kar Group claims to be a private company, Kurdish lawmakers say it is affiliated with the KDP.

This step is seen as a dangerous step toward further privatizing the oil sector by the two ruling parties that claimed victory in the region’s Sept. 30, 2018, parliamentary elections, despite claims that they had committed vote fraud.

Ghalib Mohammed, a lawmaker from the Kurdish Change Movement, told Al-Monitor, “Governmental delegations should not include company heads." He said Karim is accused of corruption and is being investigated by a commission formed by the Iraqi speaker of parliament. Mohammed added, “The Kalak refinery [located near Erbil city] originally was owned by the Iraqi government; Karim has controlled the refinery for his own and the KDP’s interests, and after some improvements, he registered it as a personal investment.”

Mohammed said the Qaiwan Group, which is close to the PUK, also is being investigation by the Commission of Integrity. Qaiwan is the owner of the Bazian oil refinery, located 23 kilometers (14 miles) northwest of Sulaimaniyah city,

He emphasized that the deal between the KRG and the federal government has not been signed yet, since the KRG was insisting on consulting Turkey first. Masrour Barzani, the KRG prime minister, met with Turkish President Recep Tayyip Erdogan in Ankara on Nov. 28 and discussed security and economic relations with him.

Muhamad cautioned that if the KRG fails to secure the deal and continues not to pay its employees regularly, widespread protests similar to those elsewhere in Iraq will happen in the Kurdistan region as well.

KRG spokesperson Jotiar Adil told Al-Monitor, “The KRG has the authority to appoint anyone it deems necessary to any official delegation to help with the negotiations with Baghdad.” Adil said, “The Kurdistan Regional Government supports the oil policy of recent years and it believes in the production of oil through the private sector in compliance with international standards for transparency and to serve the public interest.”

The KRG spokesperson stressed that the KRG would hand over 250,00 barrels per day of oil in return for a “guaranteed financial share” of the federal budget; however, Hadithi said if the KRG fails to hand over its oil, the region's share of the national budget would be suspended.

The KRG, which is choking on an estimated debt of more than $17 billion, sees its recent deal with Baghdad as the region's final hope of survival; however, the region’s rampant oil corruption and Iraq’s rapid political developments appear to have cast aside this hope and brought the KRG to the brink of a total economic and political collapse.