Baghdad expects Iraqi Kurdistan to abide by its decision to remove foreign troops from the country, though Kurdish leaders say the US-led coalition is still helping to prevent a resurgence of the Islamic State. 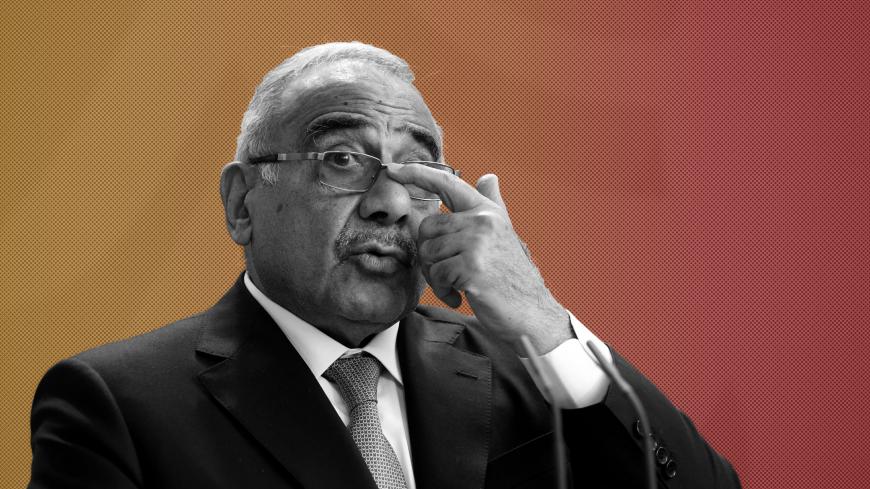 Iraqi caretaker Prime Minister Adel Abdul Mahdi arrived Jan. 11 in Erbil — his first official visit to the Kurdistan region since taking office — to discuss the country’s stability and the need for Kurdistan to cooperate with a push to expel US forces.

Iranian President Hassan Rouhani tweeted Jan. 8 that Iran will "kick all US forces out of the region" in response to the Jan. 3 killing by US forces of Qasem Soleimani, chief commander of the Quds Force in Iran's Islamic Revolutionary Guard Corps, and Abu Mahdi al-Muhandis, deputy head of Iraq's Popular Mobilization Units.

At an extraordinary session Jan. 5, Iraq's parliament passed a nonbinding decision urging the Iraqi government to expel all foreign forces from Iraqi territories. However, most Sunni lawmakers, including Kurds, boycotted the parliament session and accused the Shiite blocs of appeasing Iran rather than doing what's best for Iraq.

Despite the dissent, and Washington's refusal to leave, the Iraqi government declared Jan. 14 it will implement parliament’s decision to oust foreign forces from Iraq.

During their meeting in Erbil, “Kurdistan Region President Nechirvan Barzani and [Abdul Mahdi] reiterated that Iraq should not become a battleground for settling rivalries among regional and international powers. They also emphasized that Iraq’s relations with other countries must be on the basis of mutual interest and respect for the sovereignty of Iraq,” read a statement from Barzani's office. “They underlined that all sides should work together to prevent further escalation of the situation while restoring peace and stability, and that the interests of Iraq are the priority for all parties.”

A source close to the Iraqi government told Al-Monitor, “Abdul Mahdi has told Kurdish officials the Kurdistan region is part of the Iraqi federal state, thus they must abide by the Iraqi parliament’s decision to eject US forces from Iraqi soil once the decision is put into practice."

The source, speaking on condition of anonymity, added, “Abdul Mahdi also told the Kurds his government soon will try to reach an agreement with the US on how to implement the Iraqi parliament’s decision. Kurds should cooperate with Baghdad in this regard. No foreign forces are allowed to stay in Iraq under any pretexts."

However, "Kurdish officials in Erbil told Abdul Mahdi that they prefer the coalition forces to stay in Iraq to help prevent the resurgence of the Islamic State [IS]. PUK officials told Abdul Mahdi the same thing, but said they will eventually abide by any Iraqi decision regarding foreign troops’ presence,” the source concluded.

Al-Monitor contacted Saed al-Hadisi, the Iraqi government's official spokesperson, but he was not immediately available to comment.

There were unconfirmed news reports as well as claims by Iraqi social media users that Abdul Mahdi intends to backtrack on his recent resignation with the Kurds' support, and that the purpose of his Erbil visit was to ask senior officials from the Kurdistan Democratic Party and the PUK to help him accomplish this by mediating with Iraqi President Barham Salih, who is from the PUK and selected Abdul Mahdi for prime minister to begin with. However, the KRG spokesperson rejected such claims, stating, “This subject was not mentioned at all.” Iraqi protesters had demanded Abdul Mahdi’s resignation.

While the United States and Turkey want to preserve a presence at bases inside Iraqi territory, Iran and its Shiite allies in Baghdad want all foreign forces to withdraw from the country. There's a lot at stake for the Kurds in the US-Iranian conflict in the area, and they want to maintain balance in dealing with both sides to survive the current tensions and keep their region the most stable part of Iraq.

According to a KRG statement, Erbil and Baghdad “agreed on the importance of resolving disputes through constructive dialogue, and reaffirmed their commitment to implement the agreements already reached between the Kurdistan Regional Government and the federal government of Iraq, which will benefit all Iraqis.”

The anonymous source who spoke with Al-Monitor also said Abdul Mahdi mentioned during his trip the oil deal between Baghdad and the KRG. He said the pact will be implemented and the KRG should soon fulfill its duty under the arrangement to submit 250,000 barrels per day of crude oil to Iraqi State Oil Marketing Co. in return for receiving a fair share of the country’s 2020 budget.