Iran's ballistic missile attack on US military targets in Iraq may have been a warning to the Kurds not to stand with the United States. 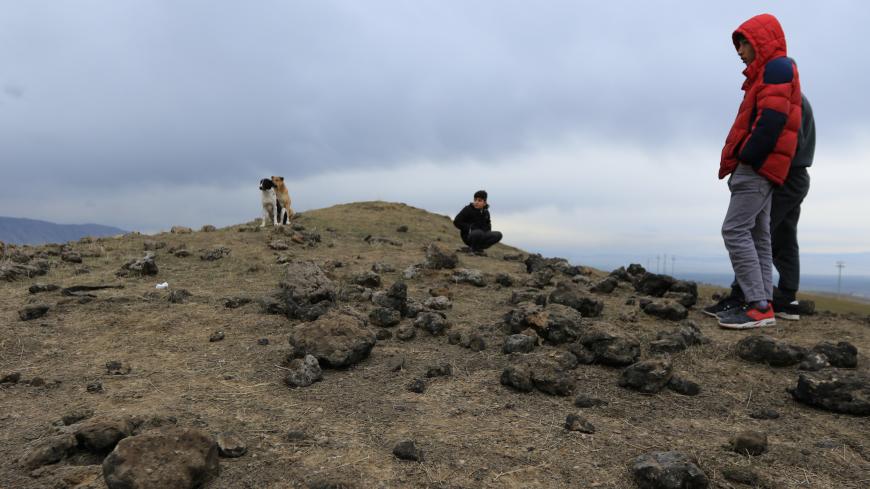 Residents look at a crater left by a missile launched by Iran on US-led coalition forces on the outskirts of Duhok, Iraq, Jan. 8. - REUTERS/Ari Jalal

SULAIMANIYAH, Iraq — In retaliation for the killing of Iran's Quds Force commander Qasem Soleimani, Iran's Islamic Revolutionary Guard Corps fired dozens of ballistic missiles at two US military bases in Iraq. No causalities have been reported.

In the early morning of Jan. 8 local time, “Iran launched more than a dozen ballistic missiles against US military and coalition forces in Iraq,” Jonathan Hoffman, assistant to the secretary of US Department of Defense for Public Affairs, said in a statement. “It is clear that these missiles were launched from Iran and targeted at least two Iraqi military bases hosting US military and coalition personnel at Al-Assad and Erbil. We are working on initial battle damage assessments.”

The Iraqi military tweeted that 22 missiles hit the country, 17 of which targeted the Ain al-Assad air base in western Iraq's Anbar province. Another two fell near the Hitan area west of Hit city and didn't explode. Five missiles hit Ebil, the capital of the Kurdistan Region in northern Iraq. The military statement did not identify the location from which the missiles were launched.

The missiles targeted a US military base near Erbil International Airport, but one of the rockets fell short of the airport and did not explode. Another fell near the town of Bardarash, 70 kilometers (43 miles) north of Erbil and 32 kilometers (20 miles) northeast of Mosul.

Spokesperson of the Kurdistan Regional Government Jotyar Adil told Al-Monitor that no casualties were recorded.

However, the Iranian Fars News Agency, citing IRGC intelligence, reported, “Some 80 US army personnel have been killed and nearly 200 more wounded in Iran's Wednesday missile attacks," and "Some 20 sensitive sites in this base were struck by 15 missiles, resulting in the destruction of a considerable number of drones and helicopters."

KRG Prime Minister Masrour Barzani tweeted shortly after the attacks that he had a telephone call with US Secretary of State Mike Pompeo, saying that he “suggested ways to de-escalate and contain the situation.”

“We remain committed to talking to all sides, to de-escalation, and to the restoration of peace and security,” Barzani tweeted later on Wednesday. “My government has a duty to defend the Kurdistan Region and its peoples and to ensure we do not become part of the current instability. We will do everything we can to keep our region secure.”

On Wednesday Barzani, President Nechirvan Barzani and parliament speaker Rewaz Faiaq convened in Erbil and discussed the situation. The KRG Department of Foreign Relations tweeted that the Kurdish leaders “emphasized deep concern over rising tensions and [the] KRG's position on the need to de-escalate. Need coalition support to continue fighting [the Islamic State].”

The Iranian missiles seem to have been fired just to soothe the angry Iranian people and restore Tehran's pride.

Iraqi Prime Minister Adil Abdul-Mahdi said in statement that prior to the attacks, Iranian officials had verbally informed him of their intention to respond to the killing of Soleimani and that he had warned Iraqi troops of coming attacks.

“Iran took & concluded proportionate measures in self-defense under Article 51 of UN Charter targeting base from which cowardly armed attack against our citizens & senior officials were launched. We do not seek escalation or war, but will defend ourselves against any aggression,” he wrote.

“The Kurdistan Region has not taken any side in the conflict between the US and Iran. By targeting a US base in the Kurdistan Region, Tehran wants to drag the Kurdistan Region into an unwanted war, and [could] attack the region if the situation further escalates into a war on the ground,” Kamaran Mantik, a political science professor at Salahadin University, told Al-Monitor. “Iran would target US bases throughout Iraq and Syria. The Iranians would not stop at launching some missiles against US targets but seek to enlarge the conflict into a total proxy war by Iranian-backed militia forces in order to limit the US military presence in the Middle East.”

Mustafa Gurbuz, a non-resident fellow at the Arab Center Washington, told Al-Monitor, “Tehran fears that with the current mayhem, Kurdish independence from Iraq may be approved by Washington and Kurdish leaders may get popular support as the Iraqi state has failed them. So Iran’s message to Kurds is clear: Do not use this as an opportunity to declare independence.”

“This is also a warning to Iranian Kurds. Iran’s Kurds and their relations with the state has always depended heavily on Tehran’s perception of the threat of ethnic separatism. So an independent Iraqi Kurdistan would be a major catalyst for a push for the same in Iranian Kurdistan, right next to the border,” he added.

Soleimani payed a major role in maintaining the power balance between the main Kurdish ruling parties and securing Iran’s interests in the region. By targeting the US bases in the region, Iran wants to remind the Kurds that aligning with the United States would open the gates of hell for them.