The attack early Sunday could also be related to both the now stalled Iran nuclear talks and Iraqi government formation. 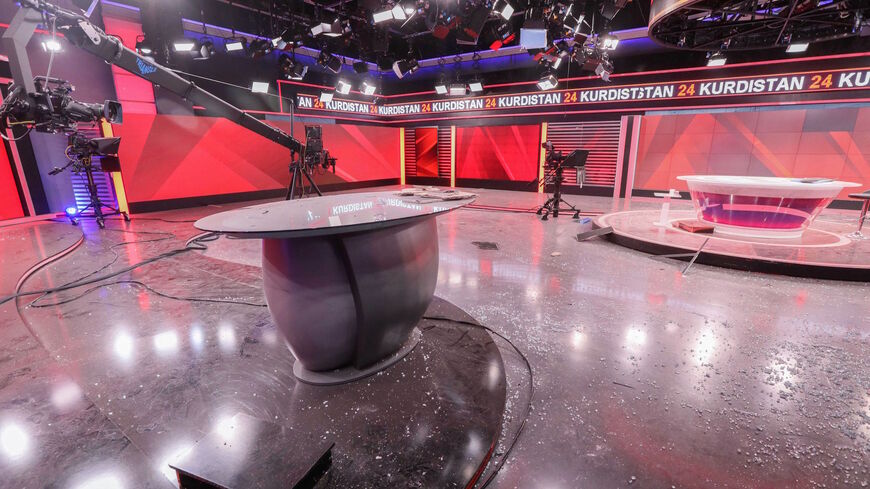 A picture taken on March 13, 2022, shows a view of the damaged studio at the Kurdistan 24 TV building, after an overnight attack in Arbil, the capital of the northern Iraqi Kurdish autonomous region. - SAFIN HAMED/AFP via Getty Images

Iran’s brazen ballistic missile attack on Erbil in the early hours of Sunday is a further chilling reminder of the continued vulnerability of Iraq’s Kurdistan Region, seen as easy prey by its large and aggressive neighbors, Turkey and Iran.

Iran’s Revolutionary Guard Corps (IRGC) claimed responsibility for the dozen or so missiles which fell at 1 am local time on Sunday near the site of the new US consulate on the outskirts of Erbil. No deaths were reported, though several buildings, including the headquarters of the local news organization Kurdistan 24, were damaged in the strike. A farm belonging to Sheikh Baz Karim Barznji, CEO of the Iraqi Kurdish oil company KAR group, was also affected, with windows shattering from the impact.

The IRGC said in a statement that a "strategic center for conspiracy and mischiefs of the Zionists was targeted by powerful precision missiles fired by the Islamic Revolutionary Guard Corps." Erbil’s governor denied the presence of Israeli agents.

Iran has long claimed that Israel’s national spy agency, the Mossad, maintains a presence in Iraqi Kurdistan. The move appears to have been in retaliation for a March 7 Israeli airstrike on Damascus that killed two IRGC guards.

The United States said there was no indication that the missiles were targeting the consulate, which will be one of the largest US diplomatic compounds in the world once completed.

Attacks against the United States inside Iraq are down by nearly 80% since Iran backed Shiite militias stormed the US embassy in Baghdad in December 2019 and launched ballistic missiles on an Iraqi base hosting US troops in January 2020 to avenge the killing of Quds Force commander Qassem Soleimani.

US National Security Advisor Jake Sullivan that no Americans were harmed and no US facilities were affected by the attack. Sullivan told CBS’ “Face the Nation,” that the United States was “in consultation with the Iraqi government and the government in Iraqi Kurdistan, in part to help them get the missile defense capabilities to be able to defend themselves in their cities."

Locals in Masif, the hilltop town overlooking Erbil and home to Massoud Barzani, president of the Kurdistan Democratic Party (KDP), and his son Masrour, who is prime minister of the Kurdistan Regional Government (KRG), said they were also shaken by the explosions. “We were terrified, our chandeliers were shaking, the booms were so loud,” said a resident contacted via WhatsApp.

Iraqi Prime Minister Mustafa al-Kadhimi vowed to investigate the strikes, calling them “an attack on the security of our people.” Masrour Barzani vowed not to “bow to the cowards who carried out the terrorist attack.”

KRG President Nechirvan Barzani, who was attending a diplomacy summit in Turkey’s Mediterranean resort of Antalya, decried the attack, calling it “an alarming development” and a “blatant violation of peace, stability and the sovereignty of Iraq.”

Iraq’s foreign ministry summoned Iran’s ambassador today to protest the assault as the country’s National Security Council convened an emergency session. The council said in a statement that the attack launched from Iranian territory “is an attack on the principle of good neighborliness between Iraq and Iran,” and constituted “a violation of international laws and norms.” Iraq was expecting an explanation and a condemnation of the aggression from Tehran, the council added.

Iraqi Kurdish officials speaking not for attribution suggested that the real purpose of the strikes were not to avenge the deaths of the IRGC officers but rather to blow up the alliance between the KDP, the Sunni-bloc led by Parliament Speaker Mohammed al-Halbusi and Shiite cleric Muqtada al-Sadr, whose bloc won the most seats in Iraq’s October parliamentary election at the expense of Iran backed Shiite groups.

A government has yet to be formed in a period marked by violence, including an attempt on Kadhimi’s life and legal challenges mounted to change the outcome of the election. The KDP’s support for Sadrists has infuriated Iran. “They are extremely angry for driving a wedge in the Shiite house, as they see things,” one of the KRG sources noted. The Iran-backed factions are pushing to be part of any new government, but Sadr continues to resist the idea if former Prime Minister Nouri Al-Maliki is accorded a role.

Intra-Kurdish tensions are also delaying the formation of a new government. A new prime minister cannot be appointed until a new president is elected. Under Iraq’s constitution, the position is accorded to a Kurd. The KDP and its rival, the Patriotic Union of Kurdistan, are in a fight to impose their own candidate, with the latter insisting that the current incumbent, Barham Salih, who is also backed by Iran, retain his seat.

Iran-backed groups are leveraging another constitutional clause that says there needs to be two thirds of lawmakers present in order for there to be a vote to elect the president. Until Sadr agrees to share power with them, the Iran-backed factions will continue to block the requisite quorum.

Bilal Wahab, a Wagner fellow for the Washington Institute for Near East Policy, believes that today’s attack goes beyond Iran’s attempts to scuttle the KDP-Sadr pact. “They have bigger fish to fry,” Wahab noted. Retaliation for the killings of the IRGC guards and for an alleged Israeli strike on a military base on Kermanshah inside Iran which Tehran claims originated from Erbil, are more likely reasons, Wahab said. Others suggest a link with the stalling of negotiations in Vienna to revive a deal for Iran to ditch its nuclear ambitions in exchange for sanctions relief. A deal seemed within reach until Russia made a last demand that any future business between it and Iran be shielded from sanctions it faces over its invasion of Ukraine.