The Kurdistan Region of Iraq is concerned that forthcoming Iraqi constitutional amendments will diminish their rights and lead to the loss of Kirkuk. 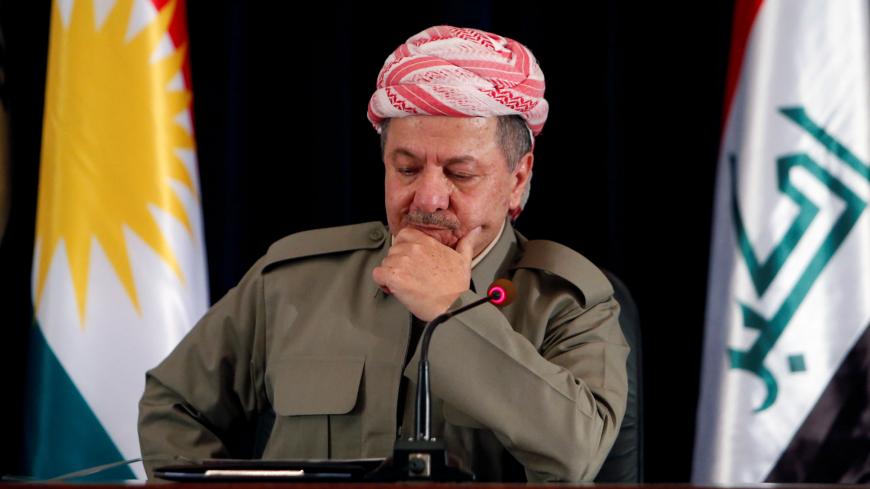 Masoud Barzani, then president of the Kurdistan Regional Government, speaks during a news conference in Erbil, Iraq, Sept. 24, 2017. - REUTERS/Azad Lashkari

The Iraqi parliament decided Nov. 3 to form a temporary committee to propose amendments to the Iraqi Constitution. The move is a bid to meet the demands of protesters, who have taken to the streets across Iraq since October to call for radical reforms, including amending the constitution and the resignation of the current government.

The semi-autonomous Kurdistan Region of Iraq is worried the amendments will seek to terminate its constitutional federal status, which could lead to its loss of the disputed and oil-rich city of Kirkuk.

“Any constitutional amendments must be in accordance to the law," Masoud Barzani, the president of the ruling Kurdistan Democratic Party, tweeted Nov. 2. "Should there be any changes, they cannot be at the cost of any concessions to the principles of democracy nor can they undermine the rights of the Kurds and other components within Iraq."

Nechirvan Barzani, president of the Kurdistan Regional Government (KRG), echoed similar concerns during an Oct. 31 speech in Erbil. Iraqi President Barham Salih, who is a Kurd, visited Erbil Nov. 5 and attended a meeting with the KRG's president, parliamentary speaker and prime minister to discuss the forthcoming amendments to Iraq's constitution.

A source close to Iraq's diplomatic and ruling elites told Al-Monitor that some Iraqi sides might push for an amendment to cancel the Kurdistan region's federalism. This includes the Iran-backed Fatah Alliance, the parliament's second-largest faction led by Hadi al-Amiri. The source said the government aims to revoke Article 140, which is about settling the fate of Kirkuk and other disputed areas between Baghdad and Erbil. Other amendments would include banning the KRG from operating the border crossings and from exporting its oil independently. The latter would be cemented into a new hydrocarbon law.

KRG spokesperson Jutyar Adil told Al-Monitor that the issue of amending the constitution “sounds more political than [like] people’s demands for public services.”

He added, “Any amendment to the Iraqi Constitution must preserve the authority of the Kurdistan region and its constitutional legal status. That in no way should be changed. We believe this constitution is well-thought-out and takes into account democratic principles."

"For Iraq itself, democracy is important," he said. "That’s why we believe [the constitution is] the best the country has at the moment and it was written with the agreement of all. The problem isn’t the constitution itself, but its implementation."

Adil said the KRG formed an internal committee to study possible scenarios, and that implementing the constitution is the only way to resolve issues between Erbil and Baghdad.

Yusuf Mohammed, a lawmaker from the Kurdish Change Movement and the deputy head of the legislative committee to amend the constitution, told Al-Monitor, “Terminating federalism is not an easy issue in Iraq. Rather, there may be more calls for further implementing the federalism system and completing its institutions, especially establishing the Federal Council in the country. However, Article 140 might be one of the issues for tense debate within the amendment process, since the Turkmen Front, as well as some Arab sides, might want the article removed from the Iraqi Constitution.”

He continued, “There are also thorny issues against the [Kurdistan region’s] independent export of oil and gas, and running the border gates, that might be on the table within the amendments process, since the KRG has not abided by handing over 250,000 barrels of oil to Baghdad as per this year’s federal budget law.”

Mohammed added, “But those sides might be unable revoke the article, since [according to Article 142 of the constitution], if two-thirds of three Iraqi provinces vote to reject the amendments, all the amendments … would be void, thus this is a big guarantee for the Kurdistan region.”

Tariq al-Harb, an expert on Iraqi law, told Al-Monitor that Iraq's constitution itself calls for amendments.

“As per Iraq’s constitution, the parliament forms a committee that its members must only be from lawmakers and representatives of all Iraqi components," he said. "The committee reports suggestions for amendments within a span of four months to parliament that, after discussions, put the whole amendments to a vote, and passes them with the absolute majority.”

Harb said, “Then the revisions will be put [out to the] public for voting. If half of the voters accept the changes, the constitutional amendments will be successful.”

Thus, the parliamentary committee decided in its second meeting Nov. 13 to ask Iraqi legal experts and the Iraqi Federal Court to identify which article overrides the other.

“If amendments to the constitution were proposed in a way that would make the state more centralized, it will make Kurds worry about the extent of their hard-won federal autonomy or oil rights or their share of national budget,” Mohammed A. Salih, a doctoral student at the University of Pennsylvania, told Al-Monitor, “Given Kurds’ constitutional veto powers, it is difficult to fathom a scenario where Article 140 will be officially removed from the constitution. The article touches on one of the two core longstanding issues of Kurds with the modern Iraqi state, which is that of land [the other being identity].”