Ownership of Iraqi Kurdistan oil is a major source of friction between Baghdad and Erbil, while Turkey and Iran compete for lucrative oil transport contracts. 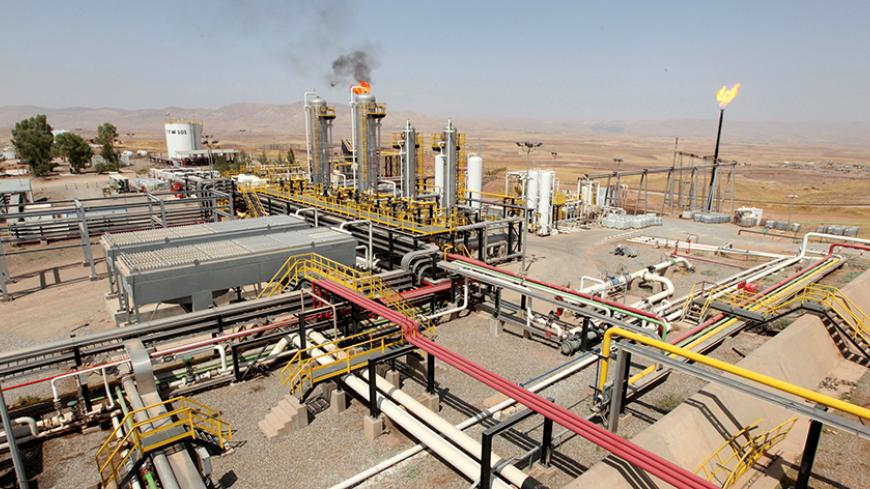 NAJAF, Iraq — Iran and Turkey are trying to extend their economic influence over Iraqi Kurdistan oil, even as controversy flares over surreptitious deals between Kurdistan and Turkey.

Iraqi Kurdistan has been shipping oil to Turkey without Baghdad's knowledge, resulting in Iraq violating an OPEC agreement, according to accusations leveled Jan. 3 by Iraq's prime minister. Also, Iraq recently confirmed that a Kurdistan Regional Government (KRG) minister had offered to sell oil fields to Turkey for $5 billion, again without consulting Baghdad.

Meanwhile, Iranian Oil Minister Bijan Namdar Zanganeh plans to visit Iraqi Oil Minister Jabbar al-Luaibi next week to discuss cooperative projects related to oil and gas. Chief among these is the establishment of an oil pipeline from the province of Sulaimaniyah in Iraqi Kurdistan to Iranian territory.

Such a project would almost completely end the oil export monopoly of the Kurdistan Democratic Party (KDP), which is led by KRG President Massoud Barzani. The oil is now carried through Turkey, which has close strategic relations with Barzani's party.

Nazim Dabbagh, Iraqi Kurdistan's representative in Tehran, told Rudaw media network that Zanganeh's visit to Iraq "comes within the framework of Iran's attempts to link the oil of Kirkuk, the Kurdistan Region and all of Iraq to Iran, in order [for it] to be exported through Iranian territory.”

Iraqi Kurdistan's oil is one of the main topics of contention between the Kurdistan Region and Baghdad on one hand, and among Kurdish political parties on the other. Critics say Barzani's KDP, which controls the KRG, based in Erbil, is using money from oil and gas toward achieving its separatist goal. Some other parties oppose separatism, fearing the KDP will control Kurdish wealth and, consequently, monopolize power in Iraqi Kurdistan.

The Kurdish differences, most notably over the oil export issue, have raised the idea of dividing the Kurdistan Region and declaring another Kurdish province that would include Sulaimaniyah, Halabja, Kirkuk and Khanaqin, which would limit Barzani’s authority to a small province with no effect. The idea was proposed by Kirkuk Gov. Najmaldin Karim, who is a leader of the Patriotic Union of Kurdistan (PUK) political movement in Iraq.

The KRG is dealing with the oil and gas issue as a domestic one that involves Kurds alone, without Baghdad, and it holds international conferences that call for international investments. Meanwhile, it is concluding contracts with companies without Baghdad. The Kurdistan-Iraq Oil & Gas Conference took place Dec. 5-7 in London under the auspices of Iraqi Kurdistan and with the participation of Kurdish officials including Minister of Natural Resources Ashti Hawrami and a large number of representatives of international oil companies. Organizers say the conference was the largest international meeting ever held regarding Iraqi Kurdistan's oil and gas sector.

Meanwhile, Turkey is taking advantage of its strategic relationship with the KDP and has offered the possibility of exporting Iraqi oil from the Kurdistan Region through Turkey without agreements between Baghdad and Erbil. Article 111 of the Iraqi Constitution affirms that “oil and gas are owned by all the people of Iraq in all the regions and governorates.”

Iraq's 2017 budget, which was adopted Dec. 7, obliges Iraqi Kurdistan to export 550,000 barrels per day total from its oil fields, including the oil of Kirkuk province, exclusively through the transnational State Oil Marketing Organization. The revenues, according to the budget, should go to the federal public treasury.

However, Iraqi Prime Minister Haider al-Abadi on Jan. 3 accused the KRG of exporting larger oil quantities via Turkey without the knowledge of Baghdad, which led Iraq to violate its OPEC obligations to cut total output by 200,000 barrels per day. During the month of November alone, the KRG exported 587,646 barrels per day through Turkey without any coordination with Baghdad, Abadi said.

The strategic relationship between Turkey and Barzani's KDP is a subject for debate among the anti-Barzani parties, especially the PUK and the Movement for Change (Gorran), whose parliamentarian Serwa Abdul Wahid called Sept. 25 on the KRG to return to Iraq instead of resorting to Turkey, adding that “the KRG had previously tried Turkey but reaped no benefit.”

Abdul Wahid said in December that financial, commercial and oil transactions made under the Barzani's supervision lack transparency.

Hoshyar Abdullah, the head of the parliamentary bloc of change, had previously accused Barzani's KDP of exporting 1 million oil barrels per day through Turkey, knowing that the export revenue destinations have yet to be revealed.

PUK leader Hero Ahmed sent a letter to Abadi in September calling on Abadi to prevent Iraqi Kurdistan from exporting oil due to its failure to follow “the principles of transparency and fairness when it comes to oil in the region.”

Ares Abdullah, a PUK parliament member and chairman of the parliamentary oil and energy bloc, in February accused the KDP of exporting 400,000 oil barrels from Kirkuk while only handing over the revenues from 20,000 barrels to the government coffers.

Also, WikiLeaks published secret documents a year ago about the existence of a deal between the KRG and Turkey to sell oil fields to Turkey in exchange for $5 billion. Muhsin al-Sadoun, a leader in Barzani's KDP, just confirmed in a Dec. 29 interview with Al-Baghdadia News, “Minister of Natural Resources in Kurdistan Ashti Hawrami had previously suggested selling several oil fields in the Kurdistan Region to Turkish Energy Minister Bert Bayrak to repay debt and resolve the financial crisis plaguing the Erbil government.” However, the deal was not concluded, according to Sadoun.

The Kurdistan oil issue will remain a card in the hands of Baghdad, Tehran and Ankara to achieve their political goals in Iraqi Kurdistan, which means it will remain a key obstacle to the Kurdistan independence project as long as the Kurdish parties fail to conclude a transparent and fair agreement.