Although the oil deal between Baghdad and Erbil is a positive development, Turkey is sidelined by it and risks becoming a “geopolitical bystander” because of Russia's decision to cancel the South Stream gas project. 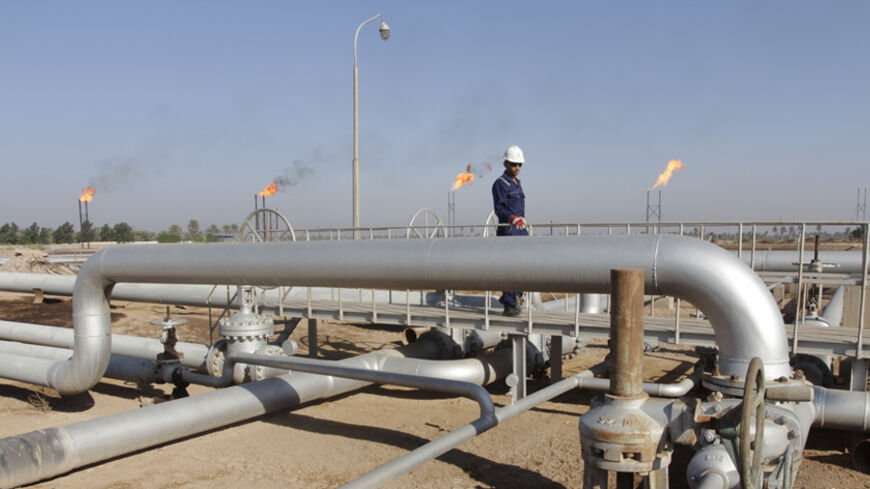 Adel Abdul-Mahdi, Iraq’s former vice president and current oil minister in Haider al-Abadi's government, spotted me aboard a flight from Beirut to Istanbul. He was in a rush, on his way back to Baghdad after the Nov. 27 OPEC meeting in Vienna. I met up with him Dec. 1 around midnight at his hotel in Istanbul, before his early flight to Baghdad. During our tour d’horizon, he hinted about the upcoming, fateful meeting he would be having with Iraqi Kurds waiting to see him in Baghdad to strike an oil deal.

I have known Abdul-Mahdi for a long time and can attest that there is no other Arab politician in Iraq closer to the Kurds than he is. The warm and close friendship he developed with Jalal Talabani, the former Kurdish president of Iraq, during his exile in Damascus when Saddam Hussein held power, makes him an indispensable Iraqi oil minister in Erbil's eyes. “Massoud Barzani told me,” Abdul-Mahdi said, “if they cannot come to terms even with me, they probably never can with anybody else in Baghdad.”

Abdul-Mahdi has always had a strategic mind, accumulating tremendous knowledge and experience of the region since the 1960s. A Francophone and a fluent English speaker, he has been an intellectual heavyweight since the days I knew him in 1970s Beirut.

From what he told me, an oil deal between Baghdad and Erbil seemed close, but he remained cautious. A few hours later, he would be sitting down for tough negotiations with Kurdistan Regional Government (KRG) Prime Minister Nechirvan Barzani; Barzani deputy Qubad Talabani, son of the former Iraqi president; and the KRG’s very competent oil minister, Ashti Hawrami.

Abdul-Mahdi said the interim oil deal reached with the Kurds in November was a goodwill gesture from the Kurds to him personally, to enhance the fortunes of the Abadi government. In the deal, the Kurds agreed to export 150,000 barrels of oil per day to the Baghdad government. “Now, we will settle down to real business. Gestures [of goodwill] are behind us. To strike a deal will not be easy,” Abdul-Mahdi told me.

The day after Abdul-Mahdi left for Baghdad, in the lobby of my Brussels hotel my eye caught a front-page headline in the Wall Street Journal: “Iraq and Kurdistan Agree on Oil Deal.” The article's opening paragraph read, “The Iraqi government agreed Tuesday [Dec. 2] to an oil export deal with the northern region of Kurdistan, signaling an end to a yearslong political impasse that has nearly bankrupted both governments and hobbled efforts to fight the Islamic State insurgency."

The new agreement will go into effect on Jan. 1, 2015, with Iraqi Kurdistan exporting 250,000 barrels of oil a day to Baghdad, and Kirkuk, currently under Kurdish control, exporting another 300,000 barrels a day. In return, 17% of Iraq’s budget expenditures will got to the KRG, and Baghdad will disburse the approximately $10 billion in the KRG's budget share it has been withholding since the beginning of 2014. In addition, the Iraqi Defense Ministry will make direct monthly payments to the peshmerga to cover expenses in the fight against Islamic State forces.

The deal is being saluted across the Iraqi political spectrum as a “win-win” for Baghdad and Erbil. Before the deal, Turkey had positioned itself as the sole outlet for oil from Iraqi Kurdistan. The Kurds established a new company, the Kurdistan Organization for Marketing Oil (KOMO), to export oil via Turkey. The Turkish terminal on the Mediterranean had been busy in the last few months loading Kurdish oil onto tankers that then navigated the globe in search of buyers.

The Baghdad-Erbil deal states that Kurdish exports will flow through Iraq’s national oil company, the State Organization for Marketing of Oil (SOMO). The Wall Street Journal assessed this as “marking a win for Iraq’s central government, which has long sought to exercise more control over Kurdish oil exports and revenue.” Thus, the money from Kurdish oil exports will no longer be deposited at Halkbank, the Turkish state bank, and instead will be transferred to an escrow account in New York.

If there is a loser in the Baghdad-Erbil oil deal, there is no doubt it is Ankara, although some nuance is required. It is not a defeat, since Ankara never declared its opposition to a deal between Baghdad and Erbil. Ankara only lost its exclusive relationship with the Iraqi Kurds. Turkey, however, can absorb this loss in exclusivity as long as it also involves placing Kurdish aspirations for independent statehood, a fearful development for Ankara, on the back burner.

Interestingly, the Baghdad-Erbil deal coincided with the demise of the long-vaunted and ambitious South Stream project of Russian President Vladimir Putin to carry Russian natural gas to Central Europe under the Black Sea.

Before the ink on the Iraqi oil deal had dried, Putin — at a Dec. 1 press conference in Ankara with President Recep Tayyip Erdogan — declared the scrapping of the $50 billion project for Gazprom to transport Russian gas to Bulgaria, Serbia and Hungary. He pledged, however, to construct a sub-Black Sea pipeline to Turkey as an alternative and promised a cut in natural gas prices along with a one-third increase in gas exports for Turkey.

Turkish pro-government circles were delighted with this news at a time when Turkey is increasingly isolated in the international arena. Erdogan was seen beaming next to his Russian counterpart when Putin made his generous pledges. In Brussels, however, I was told that the European Union views the cancelation of South Stream as a defeat for Putin. The consensus was that the project — which Brussels opposed from the start for violating EU rules of competition — had fallen victim to the recent tensions between Brussels and Russia. Putin in effect bowed before the EU sanctions and the financial constraints imposed against Moscow.

A Financial Times editorial, “Demise of South Stream big setback for Putin,” read, “Mr Putin’s presentation of the cancellation as Europe’s loss and Turkey’s gain does not bear scrutiny. He has been forced to abandon a longstanding project. That makes a strategic setback for Russia … The notion that a Russian deal with Turkey provides a strategic alternative is implausible. Turkey is not a large enough customer to replace the European market that South Stream would have served. And any plan Moscow may have to transport its gas via Turkey into the EU will run into the same problems South Stream has faced.”

If what has transpired is a strategic setback for Russia, then what is it for Turkey to ally itself with the loser against the EU, to which it is a candidate? A realignment with an unrepentant Russia in its aggressive stance vis-a-vis Ukraine — and a Russia with which Ankara is at odds over Syria — means Turkey is further jeopardizing its relations with the United States and the EU, that is, with the West.

The dissonance in its relationship with the West and with Russia plus losing its exclusive status with the KRG has, in short order, turned Turkey into a “geopolitical bystander” rather than an “invaluable geopolitical asset” in international politics.