The opening of a strategic road in Iraq's Kurdistan Region — closed since the Kurds' ill-fated independence referendum in September 2017 — could be a prelude to a reset in ties between Erbil and Baghdad. 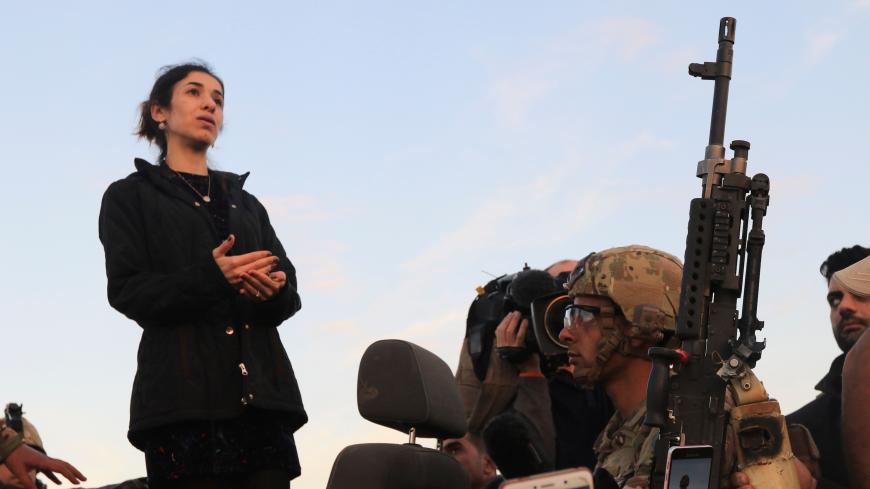 Nadia Murad, the Nobel prize laureate who has emerged as the universal face of Yazidi persecution by the Islamic State, returned to her ancestral homeland of Sinjar, Iraq, last week to celebrate a religious holiday — and how she got there was a big deal.

The globetrotting human rights activist used the Sihela road skirting the Syrian border. The strategic route had been sealed since October 2017. That is when the Iraqi army backed by Shiite militias pushed out Kurdish peshmerga forces from the area, part of a broader campaign to roll back the Kurdish presence in contested territories in the wake of the Kurds’ controversial referendum on independence.

Sinjar, Iraq’s Yazidi heartland, has long been a political football kicked around by IS, Baghdad and rival Kurdish militias as well as by Turkey for good measure.

The closure meant that Yazidis in Sinjar, who wanted to travel to Dahuk, home to their celebrated Lalesh temple and tens of thousands of other Yazidis uprooted by IS’ genocidal spree, had to spend over five hours navigating hostile terrain.

Christine Van den Toorn, an expert on Iraqi minorities at the American University of Iraq, Sulaimani, said Sihela shows how destructive Erbil-Baghdad politics are when it comes to "stabilizing these post IS areas.” She told Al-Monitor, “The road is in disastrous shape. It is only one lane each way and like one big pothole. Only through the revival of connections to [Iraq’s] main cities will Yazidis be able to survive and prosper there.”

Just as critically, the reopening of Sihela on Dec. 15 is being hailed as a hopeful sign of a burgeoning if fragile reset in Baghdad’s perennially fraught relations with the Kurds. Such cooperation will be critical to Iraq’s shaky efforts to stabilize and rebuild in the wake of its cataclysmic conflict with IS that decimated Sinjar’s Yazidis and ripped through Kurdish, Sunni and Shiite settlements as well.

The 21-point agreement on Sihela was inked Nov. 26 after months of talks between Interior Ministry officials from both sides. Sources familiar with the negotiations say the appointment in October of Adel Abdul Mahdi, a senior member of the Islamic Supreme Council of Iraq, as prime minister, provided the immediate trigger. But there are other factors at play.

The 76-year-old economist who served as deputy prime minister and finance minister in previous governments worked closely with the Kurds during the early 1990s when Shiite Arab oppositionists joined hands with them to plot the overthrow of Saddam Hussein. “There is strong personal chemistry between Massoud Barzani and Adel Abdul Mahdi,” said Abbas Kadhim, the Iraq Initiative Director at the Atlantic Council. Barzani, the president of the Kurdistan Democratic Party (KDP), remains the most influential Kurdish leader in Iraq despite the fallout of the referendum he personally spearheaded in the face of visceral opposition from Baghdad, Iran, Turkey and the United States.

“The Baghdad-Erbil reset is already well underway, and there are strong indications that the rapprochement will continue to ramp up in the coming months,” said Nussaibah Younis, a senior adviser on Iraq mediation at the European Institute of Peace, in emailed comments to Al-Monitor.

A cold realism imposed by the referendum and its aftermath has compelled Barzani to reassess ties with Baghdad.

US sanctions on Iran will likely set the stage for renewed dialogue with Tehran as Erbil and Baghdad explore formulas to help offset their effects in ways that can benefit all.

Meanwhile, Younis said, “Iran has played an important role in persuading the KDP that improved relations with Baghdad are the best route to securing Kurdish rights. The result is that Kurdish political actors are more active and influential now in Baghdad politics than any time since the death of Patriotic Union of Kurdistan (PUK) leader and former Iraqi President Jalal Talabani.” An early sign of the budding rapprochement came last month when Iraq resumed oil exports to Turkey through a Kurdish pipeline linked to fields in Kirkuk. This was followed by Barzani's visit to Baghdad where he met with Abdul Mahdi.

The rise in global oil prices has already bolstered Kurdish confidence vis a vis Baghdad, said Bilal Wahab, an Iraqi Kurdish commentator at the Washington Institute for Near East Policy. This is allowing the Kurdistan Regional Government (KRG) make up for the dramatic loss in revenue owing to its loss of Kirkuk.

Despite the difficulties Iraq’s new prime minister is facing in forming a new government, Abdul Mahdi is not anxious about his grip on power. “He’s more of a risk taker in terms of cutting deals,” said Wahab. Yet should he fail to assemble a Cabinet amid continued disagreement over who should get the highly sensitive defense and interior minister positions, Abdul Mahdi has the confidence “to drop everything and walk away.”

As ever, the main Kurdish parties remain divided over the spoils in Baghdad as well. The KDP, which bagged two plum ministries — finance, and housing and reconstruction — is now lobbying for the Tourism Ministry in exchange for support for Abdul Mahdi’s own picks. It has stubbornly opposed PUK attempts to get the Justice Ministry. The KDP insists that because the PUK's candidate, Barham Salih, was elected as president, the PUK doesn’t deserve to get anything further.

Amid all the haggling, a well-informed source briefing Al-Monitor on the Sihela talks agreed that Abdul Mahdi presented the Kurds with their best opportunity in a long time. The source recalled that Haider al-Abadi, the former Iraqi prime minister, whom the United States lobbied hard to keep in office, had had other plans.

Egged on by Turkish President Recep Tayyip Erdogan, Abadi wanted Iraqi forces to control a corridor running all the way to the Turkish border. “Their common aim was to cut the Kurds off from the border with Syria, to have the ability to choke them off,” the source, speaking on condition of anonymity, told Al-Monitor.

For Ankara, interrupting the connection between Iraq and Syria’s Kurds is part of its ongoing strategy of truncating Kurdish majority lands and driving militants from the Kurdistan Workers Party (PKK) and their Syrian Kurdish affiliates away from Turkey's borders.

The PKK continues to maintain a presence in Sinjar even though its commanders claim to have withdrawn. This prompted a fresh wave of Turkish airstrikes Dec. 13, which reportedly claimed the lives of four civilians, including a 14-year-old girl. Ignoring Baghdad’s rebukes, Turkish jets struck Sinjar again Dec. 15.

Ankara’s relations with the KDP have remained chilly since the referendum and it will likely be unhappy with the Sihela deal.

When the KRG broached the subject of reopening the Sihela road, Abadi demanded that checkpoints be staffed with Iraqi troops and that customs posts be run by personnel dispatched by the central government. Baghdad also insisted that the Kurds permit the unconditional return of Arabs displaced by the jihadi takeover, the sources briefing Al-Monitor said.

The KRG resisted, saying it wanted their names so as to net potential IS infiltrators in their midst.

The latter demand remains controversial. Rights groups have accused the KRG's Asayish security forces of making little effort to distinguish between IS members and ordinary civilians. Human Rights Watch alleged in a February report that Kurdish forces had executed IS prisoners en masse.

Van den Toorn argues that the KDP was in no rush to reopen Sihela because it did not want displaced Yazidis sheltering in Dahuk to return to Sinjar. “They want these Yazidis in the camps for political purposes, for example for votes in future provincial elections.” Most of all, she continued, “If Sinjar starts to normalize it is a win for Baghdad as Sinjar is now under federal control, which the KDP wants to avoid at all costs.” But a compromise was struck and an unfazed Abdul Mahdi signed the Sihela agreement on the eve of Murad’s trip

Still, none of these positive developments should allow for complacency, many warn. Fundamental sticking points between Baghdad and Erbil remain. First and foremost is the Kurds’ unremitting yearning for independence. The Atlantic Council’s Kadhim observed, “The net effect is that Baghdad is not willing to engage and invest in the Kurdish region, thinking ‘why should I if they are going to leave us anyway.’”

Conversely, in the absence of a fair share of the national budget, oil revenues and jobs, the Kurds' desire for separation sharpens by the day. “Baghdad is not giving the Kurds what they deserve, and US messaging to the Kurds about deferring independence to a future date, further muddies the waters," Kadhim said.

More immediately, as long as the issue of the disputed territories remains unaddressed, the risk of renewed conflict between the Kurds and Baghdad, notably over Kirkuk, remains very real, the International Crisis Group said in a recent report. The status quo creates a vacuum that IS and regional mischief makers are only too willing to exploit.

The Kurds insist that the boundaries need to be resolved through a referendum as stipulated in Article 140 of Iraq’s Constitution. But others say the 2007 deadline for a referendum has long expired, and hence the country’s constitutional court needs to weigh in.

The International Crisis Group has called for the United Nations to step in as a mediator. A "low-hanging fruit" would be rekindled security cooperation between the Iraqi army and the peshmerga against IS. But the UN’s ultimate priority ought to be to help the parties agree on their internal borders through political negotiations. Otherwise, “Another violent spasm is just a matter of time, as predictable as the swing of a pendulum.”