After a long delay, the Iraqi parliament has finally elected its speaker and in doing so confirmed the rising influence of Iran. 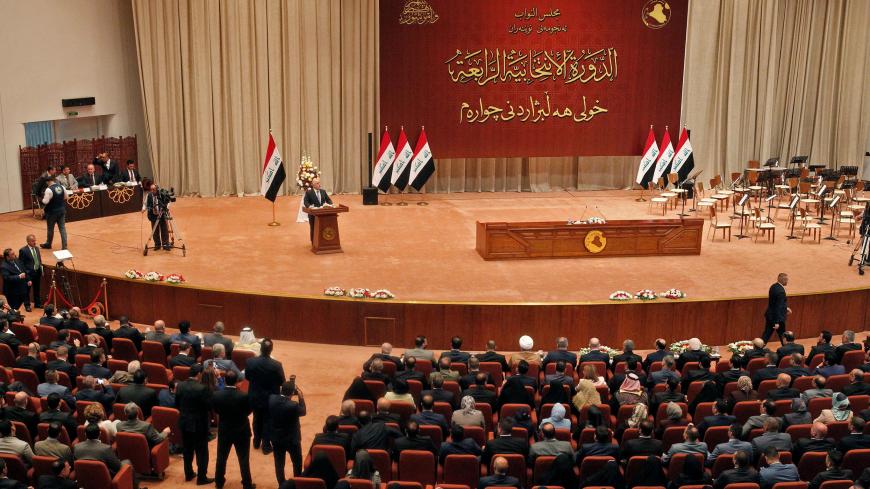 A picture shows a general view of the Iraqi parliament during a meeting in the capital, Baghdad, Sept. 3, 2018. - SABAH ARAR/AFP/Getty Images

Iraq’s parliament elected Mohammed al-Halbusi as its new speaker on Sept. 15, opening the door for the formation of a new government following months of political uncertainty. Efforts to establish a government stalled following the May 12 parliamentary elections, as the major winning parties have been unable to agree on a coalition to form the new government.

Lawmakers also elected Hassan Karim al-Kaabi as Halbusi’s first deputy on the same day, followed by the election of Bashir al-Haddad as second deputy on Sept. 16.

Halbusi, 37, is the youngest parliament speaker in the country’s history. He is an influential Sunni politician from Anbar province. He became known as a businessman after 2003, and was involved in many contracts with the US forces during the occupation that ended in 2011.

Halbusi was first elected to the Iraqi parliament in the 2014 elections, and quickly progressed in his new career. He was on the parliamentary human rights and finance committees until 2017 — serving as the head of the latter from 2016-2017 — when he quit parliament to become the governor of Anbar province after the dismissal of Suhaib Ismail al-Rawi from the position for alleged corruption.

Halbusi maintains a good relationship with US forces, as a large number of them are located at the Ain al-Asad military base in Anbar province.

He was the candidate of the largest Sunni bloc, the National Axis Coalition. This Sunni coalition is part of the Bina Alliance, which includes the Fatah Alliance (consisting of the political wings of the Popular Mobilization Units), pro-Iranian militias and former Prime Minister Nouri al-Maliki’s State of Law Coalition, both known to be allies of Iran.

Halbusi defeated two other prominent Sunni candidates for the speakership, securing 169 votes compared to 86 for former Defense Minister Khalid al-Obaidi, who is a member of Abadi’s Nasr, or Victory, Coalition. Former parliamentary speaker Osama al-Nujaifi also ran for the position but did not reach the final stage of the voting. Iraq’s parliament has a total of 329 seats.

Halbusi is among the second, younger generation of Sunni politicians who were not a part of the exiled Iraqi opposition that formed the post-2003 government. He is also not a member of the Iraqi Islamic Party, which is considered the Iraqi branch of the Muslim Brotherhood, in contrast with former speakers Mahmoud al-Mashhadani, Nujaifi and Salim al-Jabouri.

The parliament was due to select its speaker and two deputies on Sept. 3, but failed to do so due to disagreements over which bloc was the largest in parliament. Muqtada al-Sadr’s Sairoon Alliance, which came first in the May elections, recently opened negotiations with Fatah to form the largest bloc capable of forming a new government. Although Sairoon and Fatah have not yet formed an alliance and have had some disagreements, they cooperated on the election of Halbusi. The first deputy from Sairoon and the second deputy is from the Kurdistan Democratic Party (KDP) led by Massoud Barzani.

Iran and the Untied States were among the first countries to congratulate Halbusi on his new post.

However, upon becoming speaker of the parliament, Halbusi’s first two statements were supportive of Iran. He denounced the sanctions against Iran and invited his Iranian counterpart, parliamentary speaker Ali Larijani, to visit Baghdad. In this complicated scene, it seems the United States has lost the game to Iran.

Now parliament is due to select the president on Sept. 25, followed by the prime minister, which will eventually lead to a new government.

The two main Kurdish parties, the KDP and the Patriotic Union of Kurdistan (PUK), are competing over the post of president. While no formal nominations have been made, several potential candidates have been mentioned. From the KDP, former Iraqi Foreign Minister Hoshyar Zebari, party leader Fazil Mirani and even the KRG prime minister Nechirvan Barzani have all been mentioned as potential candidates. Rumored candidates from the PUK include President Fuad Masoum; PUK leaders Molla Bakhtiar and Mohammed Sabir; former Iraqi Minister of Water Resources Latif Rashid; and Barham Salih, a former KRG prime minister and deputy prime minister of Iraq.

Electing the prime minister is the hardest task facing lawmakers. Prime minister is the most important and influential position in the government and requires a broad agreement among multiple political parties. Until last week Haider al-Abadi was the leading candidate. However, Shiite cleric Ayatollah Ali al-Sistani said he will not support a nominee who has previously served in a high-level government position, since senior Iraqi politicians are corrupt and have failed to provide basic services to the people. This, combined with the protests in Basra and with parties maneuvering to block US influence, greatly diminishes Abadi’s chances of serving another term as prime minister.

Political parties have discussed several other nominees. Former Finance Minister Adil Abdul Mahdi is the most prominent name and there are rumors that Sadr supports him. However, it remains to be seen how Najaf will react to a candidate who has a history of serving in the government.