After Iran succeeded in pushing through its preferred candidate for Iraq's parliament speaker, Tehran continued its pressure to secure the position of second deputy speaker, bringing the "score" to 2-0 against the US. 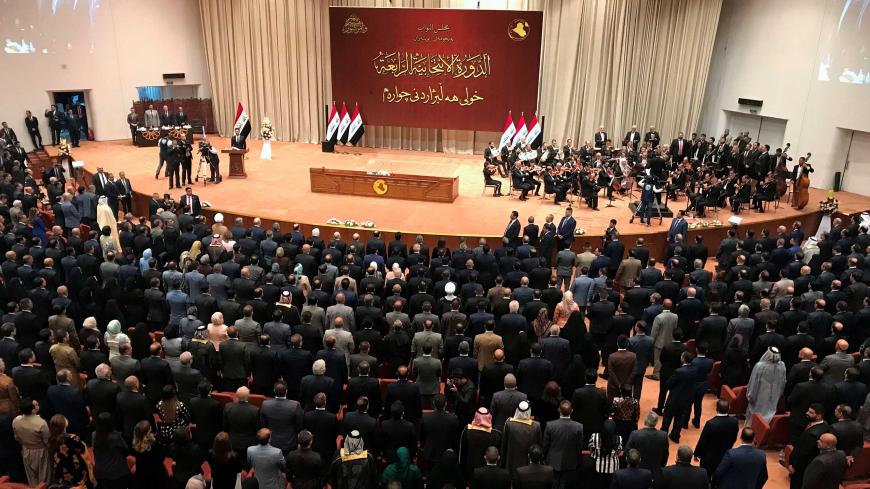 The Kurdish lawmaker was sitting in his flat Sept. 15 in Baghdad's Green Zone, under crippling pressure from the main Kurdish, Shiite and Sunni political parties to withdraw his nomination for the position of second deputy speaker of parliament.

With the threat of the Islamic State gone in bringing Iraqis together, the political parties found it difficult to reach an agreement about sharing power more than four months after May 12 elections, due to regional and international pressure, especially from Iran and the United States.

“I genuinely thought I could be abducted at any moment and killed,” Ahmad Haji Rashid said Sept. 19 as he recalled the events for Al-Monitor from the safety of his Sulaimaniyah office. Rashid, a rebellious, hardworking and pious parliament member respected by Kurds, Sunnis and Shiites alike, stepped into this melee without realizing the full implications.

Based on a power-sharing agreement and Tehran's influence, Iran managed to secure the parliament speaker position for Mohammed al-Halbusi of the largest Sunni bloc, the National Axis Coalition, and the first deputy position for Hassan Karim al-Kaabi, a Shiite from Muqtada al-Sadr’s Sairoon Alliance. Rashid was one of four Kurdish candidates for the position of second deputy. His main rival was Bashir al-Haddad, a Sunni Turkmen from Erbil nominated by the main Kurdish party, the Kurdistan Democratic Party (KDP).

“In today’s Iraq, without a doubt, any voting requires prior agreements,” Haddad told Kurdistan 24 news Sept. 15. “There's no doubt that various sides have reached an agreement, including the Kurdish side. … They vote for us and we vote for them.”

The Kurdish parties, infamous for their fractured politics, failed to agree among themselves to nominate one candidate. Instead, the Patriotic Union of Kurdistan and the KDP agreed to coordinate their efforts, leaving out smaller Kurdish parties such as Rashid’s Kurdistan Islamic Group (Komal).

A group of parliamentarians from New Generation, a new party in the north, lobbied for Rashid. “How can you support a candidate [KDP's Haddad] who believed in the disintegration of Iraq by supporting the Kurdistan referendum for independence?” Yusra Rajab of the New Generation reportedly asked Shiite and Sunni parliament members Sept. 15. In the first round of voting that evening, Haddad failed to secure the necessary 167 votes to win the position, receiving 152 votes. The parties to the power-sharing agreement were furious.

Following the first round of voting, Hadi al-Amiri of the Fatah Alliance told Rashid in the parliament hall, surrounded by a number of other parliamentarians: “This is a wide-ranging agreement with the Kurds; you should abide by it.”

Rashid then told Amiri, "We were not consulted about this, so we don’t have to abide by it." The KDP officials in Baghdad and their parliamentarians tried on several occasions to convince Rashid, but failed.

One of the parliamentarians present as Amiri spoke to Rashid for a second time was Sarkawt Shams of New Generation, whose party had been lobbying for Rashid that day. Shams recalled Amiri telling Rashid, “I have given my word to brother Massoud [Barzani]," head of the KDP, that Amiri would deliver the vote.

Shams told Al-Monitor, "The tone was friendly and Amiri was trying to resolve the issue as if he was in a tribal gathering."

Back in Erbil, Iranian Consul General Murteza Ebadi couldn't hide his anger over the failure, and Rashid said Ebadi roared on the phone with two members of Rashid's Komal political bureau, asking why they were rocking the boat. Ebadi tried to convince Komal head Ali Bapir to cooperate, but failed.

A Komal source told Al-Monitor that even Lebanon's Hezbollah intervened and tried to pressure Rashid, who didn't budge. Then a surprise call came from a parliamentarian whom Rashid knew had good relations with the KDP. Rashid was aware of rumors that a large amount of cash had changed hands in exchange for votes, nomination or withdrawing a nomination in the previous days.

The KDP accused the Shiite parties of not adhering to their side of the deal. Former Prime Minister Nouri al-Maliki of the State of Law Coalition called every single Shiite parliament member of his coalition that night and urged them to adhere to the agreement with the Kurds, according to Rashid.

Shams said the Americans finally found out about the saga through a New Generation member and paid a visit to Rashid on Sunday, telling him they were "monitoring" the situation.

Five minutes before the second and final round of voting, members of the Nasr Coalition of Prime Minister Haider al-Abadi — who is considered to be close to the American side — received a message via social media urging them to vote for the KDP candidate supported by the Fatah Alliance, Sairoon and Iran. The KDP candidate then secured the position by receiving 185 of 282 votes. (There are 329 parliament members.)

“In Iraqi politics, everything is about arrangements, and I wanted to say I am against these arrangements,” Rashid, who received 53 votes in that round, told Al-Monitor.

The pro-Iran camp seems to have won this battle in the parliament against the pro-American camp. As the Iranians were preparing for the next battle — a vote for the presidency set for Sept. 25 — US Secretary of State Mike Pompeo spoke to Halbusi, the new speaker, by phone Sept. 19, noting his support for Iraqis to form a moderate government "that is responsive to the aspirations of the Iraqi people.”