After May elections, the Iraqi parliament finally elected a new president, Barham Salih, who chose the independent Adel Abdul Mahdi to try to form the next government. 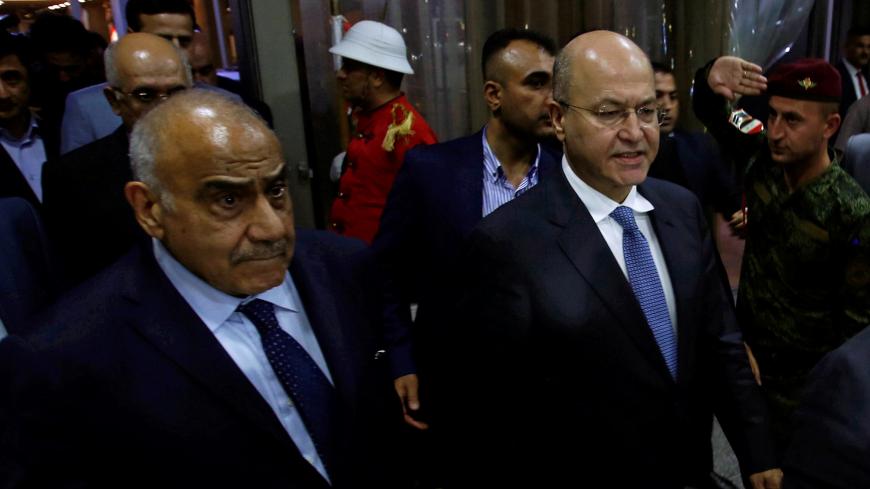 The battle inside and outside the Iraqi parliament was fierce and bitter, but by the evening of Oct. 2, Barham Salih had managed to pull off one of the biggest electoral feats in recent Iraqi history by putting his faith in Iraqi parliamentarians to elect a new president. That night, the overwhelming majority of parliament members, 219 out of 329 total, voted to install Salih, a Kurd who believes in the territorial integrity of Iraq and who has vowed to work for all Iraqis.

Since 2003, the Iraqi presidency has been reserved for a Kurd, the parliament speakership for a Sunni and the premiership for a Shiite. Although Salih’s election has generally been welcomed among Iraqis, including the Kurds, his victory marked an escalation in tense relations between Iraq's two dominant Kurdish parties, the Kurdistan Democratic Party (KDP) and the Patriotic Union of Kurdistan (PUK), already at odds over the governing of Iraqi Kurdistan and related socioeconomic issues.

Earlier this year, Salih had split from the PUK to form the Coalition for Democracy and Justice, which adopted a platform based of fighting corruption and advocating government reform. He then abandoned the coalition and rejoined the PUK to become the party’s nominee for the presidency in September.

Having failed to convince the PUK to nominate him for the 2014 presidential race, Salih decided this time around to put his trust in the Iraqi parliament should he not succeed in securing the necessary support from the KDP's leader, Massoud Barzani, so he could run as the Kurds' consensus candidate. The Kurdish parties can nominate one or more candidates, but in the past, they had reached agreement and put forth a single nominee. This year, however, they could not settle on one candidate.

On Oct. 2, after realizing the race would be decided in Salih's favor, Barzani ordered his preferred candidate, Fouad Hussein, to withdraw from the race and for the KDP parliamentarians not to take part in the second round of voting, which would seal Salih’s victory. Parliament Speaker Mohammed al-Halbousi, however, rejected the KDP bloc's request to withdraw Hussein's name, resulting in the parliamentarians present casting 219 votes for Salih and 22 for Hussein, with 30 votes deemed invalid.

“Iraq desperately needed someone like Jalal Talabani to keep the balance between various religious and ethnic groups in Iraq,” Mohammed Bakhtiar, a Salih aide told Al-Monitor, referring to the late Kurdish president known for his negotiating skills. “Barham Salih does not distinguish between the importance of the security of Baghdad and Sulaimaniyah and sees both cities as one. … The parliament proved that it is genuinely a representative body of the Iraqi people.”

Iraqi parliamentarians have typically followed the instructions of their leadership to vote for a particular candidate. This has not, however, been the case in some recent votes.

“What was striking for me was that around 70 MPs voted independently of their leadership’s instructions,” Sarkawt Shams, a member of parliament from the New Generation, told Al-Monitor in reference to the Sept. 16 elections for the second deputy speaker of the parliament. An independent streak was also a factor in Salih's election.

Regarding this development, Renad Mansour, a Chatham House expert on Iraq, remarked to Al-Monitor, “It is the first time that the selection of the president came down to a vote in the parliament, and the new MPs were able to go beyond the traditional horse trading and backroom deals.”

Despite Iraqis generally welcoming the new president's election, it immediately reignited tension on the streets of Iraqi Kurdistan, as the KDP accused the PUK of abrogating an agreement on a consensus candidate and of backstabbing the party. A senior PUK source speaking to Al-Monitor on the condition of anonymity denied that an agreement had been reached.

If there was indeed an agreement, it appears that PUK officials may have been buying time by initially agreeing on a deal. By doing so, they could move to round up votes in the parliament while leaving the KDP to think that there was no need to reach backroom agreements to vote against Salih. Before the election, Barzani released a statement rejecting the Iraqi parliament accepting more than one presidential nominee, emphasizing that a single nominee, based on a consensus among the Kurdish parties, should be put forward.

To no one's surprise, the United States and Iran were involved in behind-the-scenes machinations in the election of the Iraqi president and therefore ultimately the prime minister. Al-Monitor learned they both supported Salih and Abdul Mahdi for the presidency and the premiership, respectively.

Despite the various requests to withdraw, according to a source close to Salih, Salih insisted on allowing the parliament to determine the outcome. Shortly before the parliamentary session was scheduled to begin, the KDP announced that a deal had been reached for Hussein to be elected in return for several sovereign ministries and positions to go to the PUK. Salih refused to budge. His aide Mohammed Bakhtiar tweeted, “The news about Dr. Barham withdrawing from the race has no basis. … We are in parliament and are waiting for a democratic process to start so the representative of the people choose their qualified person.”

Soon after the election, however, both Iran and the United States welcomed Salih's appointment. For close to two years, Salih had worked to improve his relations with the Iranians, who wield unparalleled influence in Iraqi affairs.

With the election won, Salih asked the independent Adel Abdul Mahdi to form a government. How long that takes will depend on how quickly ministries and positions can be distributed among the two main Shiite blocs, the Reform and Bina coalitions, and others who had supported Salih. According to Mansour, Salih having asked Abdul Mahdi to form a government immediately after being sworn in shows that there had been an agreement beforehand among the main Shiite blocs and Salih.

While the new president has a close relationship with the prime minister-designate, which makes working together easier for them, the struggle ahead is daunting. Salih and Abdul Mahdi, both considered close to the Americans as well as the Iranians, will soon have to deal with internal and external challenges, in particular the escalating tensions between the United States and Iran.