Iraqi President Barham Salih threatened to resign amid the country's failure to form a new government. 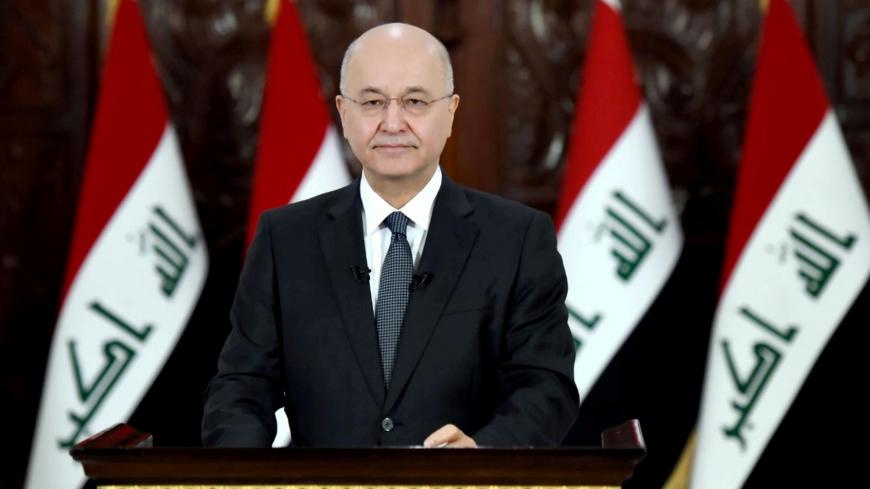 SULAIMANIYAH, Iraq — Iraqi President Barham Salih announced Dec. 26 that he was ready to resign. The president has faced pressure from protesters and Iranian-backed Shiite parties to name a new prime minister, but, in a letter to parliamentary speaker Mohammed al-Halbusi, Salih said he would rather resign than nominate Asaad al-Eidani for prime minister.

The Iran-backed al-Binaa Alliance proposed the candidacy of Eidani, the current governor of Basra. According to the Iraqi Constitution, the president must present the prime minister candidate chosen by the largest bloc of parliament for a vote.

Salih left Baghdad for Sulaimaniyah immediately after his announcement.

Islah is composed of the Sairoon Alliance, led by Shiite cleric Muqtada al-Sadr, and the Nasr coalition of former Prime Minister Haider al-Abadi.

Sadr and many other Iraqis commended Salih’s move, while al-Binaa called on the Iraqi parliament to take legal measures against Salih for “breaching” the constitution.

Iraq’s post-2003 quota-based political system is marred by a division of power along sectarian and ethnic lines. The system has failed to bring true democracy, prosperity and peace to Iraq. Public protests have gripped Baghdad and southern and central Iraq since October.

Salih, a Kurd, was elected Iraq’s president in October 2018 through the support of Kurdish, Shiite and Sunni parties.

Article 76 of the Iraqi Constitution stipulates that the largest parliamentary bloc nominate the prime minister candidate. Yet interpretations have varied on what constitutes parliament's largest bloc. Salih addressed the Iraqi Federal Court Dec. 20 to clarify what is meant by the largest bloc.

In either scenario, Halbusi would replace Salih.

A source who is close to the Iraqi president told Al-Monitor, “Salih is serious about convincing Iraq’s [still undetermined] biggest parliamentary bloc to nominate a person for Iraq’s new prime minister who is acceptable to the protesters, so that stability might return to the country. This is why Salih has not accepted any candidate representing the biggest parliamentary bloc.”

The source continued, “If the related parliamentary blocs do not come together toward dealing with the issue, Salih might be obliged to fulfill his threat of resignation.”

The Iran-backed Shiite parties in Iraq have had enough with Salih, who refused the nominations of Minister of Higher Education Qusay al-Suhail and Mohammed Shia al-Sudani, a previous al-Binaa candidate. Such refusals prevented the formation of a new government within the 15-day constitutional deadline.

​Parliamentarian Oday Awad sent a complaint with the signatures of 150 parliamentarians to Iraq’s Federal Court asking for Salih's removal from office on charges of breaching the constitution. Awad is a member of al-Sadiqoun bloc, which is affiliated with the Iran-backed Asaib Ahl al-Haq militia. Later, the bloc said that Awad’s request did not represent their official position.

​The Iraqi protesters have rejected all the candidates thus far, and have also called for the resignation of Salih and Halbusi, accusing them of failing to adhere to constitutional deadlines. The protesters' condition for Iraq’s future prime minister is that he should be independent.

​Salih left the Patriotic Union of Kurdistan (PUK) in 2017 and formed the Coalition for Democracy and Justice (CDJ). As president of the CDJ, he said, “I will not be behurmet [dishonorable]. I won’t dishonor myself to return to the PUK for the sake of a political post.” One year later, However, Salih returned to the PUK, which, supported by Iran, secured Salih’s election as president. Since 2005, all Iraqi presidents have been from the PUK.

The PUK held its fourth general congress from Dec. 21-23 in Sulaimaniyah, its first congress since the death of former Iraqi President Jalal Talabani, the PUK’s previous secretary-general. A PUK source told Al-Monitor that Salih has a good chance of becoming the new head of the PUK. But the party’s congress concluded without naming a new leader.

​Peregraf, a Kurdish news outlet, reported Dec. 23 that an Iranian delegation is in Sulaymaniyah to closely watch the PUK congress. Iran has threatened to marginalize Salih within the PUK if he does not accept an Iran-backed candidate for prime minister.

Asked whether Salih could simultaneously be both Iraq's president and the PUK's leader, PUK spokesperson Latif Sheikh Omar said that such details would be settled by his party’s congress.

Kamal Chomani, a nonresident fellow at the Tahrir Institute for Middle East Policy, told Al-Monitor, “It seems the Talabani family will restrict Barham Salih's maneuvers within the party.”

A source who is close to Iraq's ruling elites told Al-Monitor that US and Iranian officials are trying to reach an agreement on a prime minister candidate. Unless Washington and Tehran reach a deal, the source said, Iraq’s political scene will witness more upheavals, and Salih and Halbusi might both resign, adding more fuel to the fire that is burning the country.