Internal politics led to the selection of Fouad Massoum as the Kurdish candidate instead of Barham Salih. 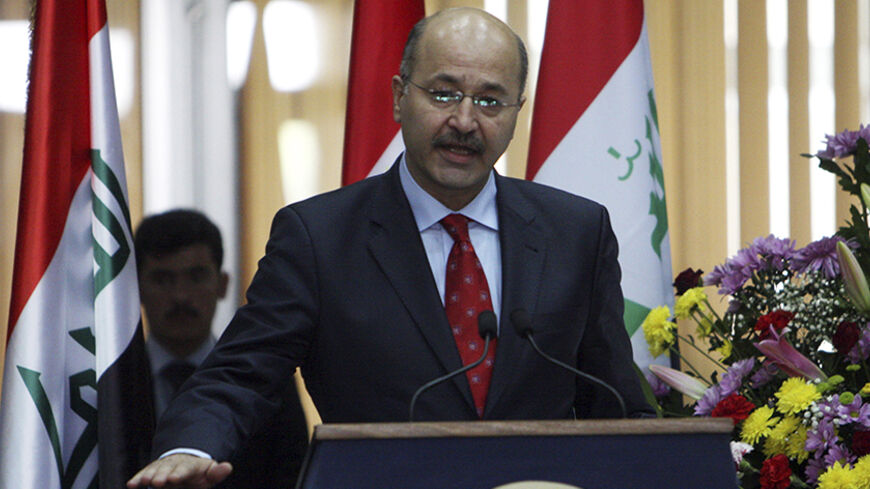 The Kurdish choice of Fouad Massoum and his eventual election as Iraq’s new (and second Kurdish) president needs further scrutiny. My last article on this issue resonated among Iraqi Kurdish officials. I received valuable (but non-attributable) information and a correction on the voting attitudes of Kurdish parliamentarians in the Iraqi national assembly that shed new light on how local political considerations and calculations may be instrumental in determining regional and international politics, a phenomenon exclusive to the Middle East.

In my last article, I had written the following:

"Late July 23, in a closed-door gathering in Baghdad, Kurdish members of parliament voted for their presidential candidate in a contest between [Patriotic Union of Kurdistan] PUK senior leaders Massoum and Barham Salih.

"In a close race, Massoum won a majority of 30-23. The rest of the Kurds' parliamentary bloc was absent.

"This voting pattern shows that Turkey, and its closest ally in the region, the KDP, tilted toward Salih. His candidacy had been opposed earlier by a powerful PUK figure, Talabani's wife, Hero Khan. There were widespread rumors in Sulaimaniyah that Iran, which has a strong behind-the-scenes presence in the area, had been backing her for a long time."

A leading Kurdish statesman and an insider who asked to remain anonymous told me that exactly the opposite is true. According to this new information, while the PUK, Gorran and also the Islamists supported Salih’s presidential bid, strong support from the Kurdish Regional Government (KRG) President Massoud Barzani’s KDP for Massoum enabled him to outnumber Salih to become the Kurds’ candidate.

Only one round of voting took place on late July 23, and out of 63 Kurdish parliamentarians, 55 participated in the meeting. Two out of the 55 (presumably from Gorran) abstained from voting. Salih managed to get the support of the majority of PUK parliamentarians, nearly all of the Islamists and more than half of Gorran. However, out of the KDP’s 25 parliamentarians, only one or two voted for him. Despite having the support of 10 PUK members out of 17 in attendance, six Islamists, five Gorran and probably only two from the KDP, he was outnumbered against the 30 votes that Massoum secured. Nearly 90% of the KDP determined the ultimate election of Massoum.

I checked these details with sources close to the KDP leadership, who confirmed them. These sources reiterated that a week before the fateful vote, the KDP had already committed to support Massoum against Salih, as Barzani did not want Hero Talabani, the wife of President Jalal Talabani, to have a say in the outcome. Jalal Talabani, the founder and the uncontested leader of the PUK, was undergoing medical treatment in Berlin and about to return to Sulaimaniyah.

For observers of Iraqi Kurdish politics, it is no secret that while Jalal Talabani was in Berlin since December 2012, Hero Talabani and Salih formed opposing poles within the PUK.

There was widespread speculation in the KRG and particularly in Sulaimaniyah that a strong presence by Iran in the region, in the person of Qasem Soleimani, the commander of the Revolutionary Guard's Quds Force, was supportive of Hero Talabani and PUK against Barzani, and that his KDP was a strong ally of Turkey and was entertaining secession from Iraq. This was an unacceptable choice for Tehran, which preferred to control Iraq through its influence over the central government in Baghdad.

At the beginning of March 2014, when Turkey’s Foreign Minister Ahmet Davutoglu made his first ever visit to Sulaimaniyah to deliver the opening speech to International Sulaimaniyah Forum initiated by Salih, a senior member of the Turkish delegation told me, “Our real reason for coming here is to give support to Salih. You know there is considerable dissent in the PUK.”

Davutoglu, after delivering his opening speech, visited Hero Talabani at her residence and then went on to Erbil for further meetings with KDP officials.

Armed with that information, I jested with the official, telling him, “As long as you are going to meet with Hero and the reason for your coming here is to show support for Salih, why don’t you take with you on your visit? You may get something for it.”

Deciphering the conflict of Turkey-Barzani-KDP and Salih in the PUK opposed by Iran-PUK-Gorran and Hero Talabani became even more difficult when Barzani supported Massoum against Salih to avoid clashing with Hero.

Yet, even though Barzani likes and respects Salih, a protege of Jalal Talabani with a reputation as his “adopted son,” intra-Kurdish calculations and the nature of relations between the KDP and PUK forced Barzani to accommodate Hero Talabani.

According information provided by PUK officials who insisted on not being identified, Barzani saw the benefits of a PUK controlled by a family, just like the KDP under his own control.

This would thus end the last distinction between the KDP and the PUK, and as a matter of fact, it would maintain the preponderance of the KDP over the PUK in the KRG.

In terms of the regional dimension of Massoum over Salih, satisfying the Iranians vis-à-vis Turkey and its staunch ally Barzani does not seem to be the real determinant.

Traditionally, to make Erbil receptive to Turkey’s influence and Sulaimaniyah to that of Iran, while the KRG presidency in Erbil is with the KDP, Barzani has tacitly agreed to live with a PUK Kurd as the president of Iraq in Baghdad.

In this sense, having Massoum or Salih as a Kurdish president in Baghdad will not make much of a difference. That’s why it's more important to focus on the local dynamics shaping the regional developments with international political ramifications. At least when it comes to the Kurds of Iraq, that seems to be the case.