Can Iraq's new president save country from fragmenting?

The election of Fouad Massoum as president of Iraq may mean that Kurdish independence is now on the back burner. He is a close friend of Iraqi President Jalal Talibani, whose presidential tenure began in 2005. 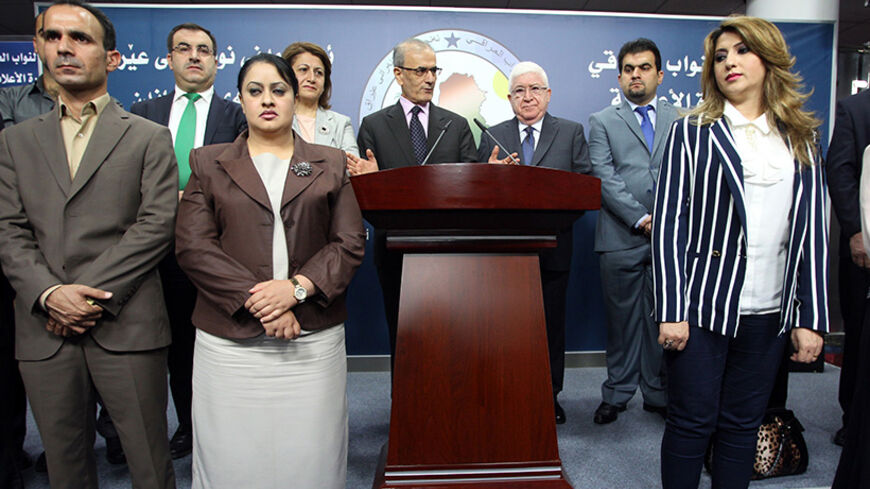 Iraq has a new president. In the wake of the capture of the second-largest city, Mosul, by the Islamic State (IS); ever-growing demands by the president of the Kurdistan Regional Government (KRG), Massoud Barzani; and rising dissent against a new mandate for incumbent Prime Minister Nouri al-Maliki, Iraq has seemed on the verge of collapse. There has been a quasi consensus among Iraq observers that Iraq has ceased to exist and was awaiting de jure confirmation of its de facto fragmentation.

Many have thought that this country, which had inured international opinion to its endless succession of crises since 2003, would not survive this latest crisis. But we could be mistaken. First, Salim al-Jabouri (affiliated with the Iraqi Islamic Party, the Iraqi Muslim Brotherhood) was elected speaker of the parliament. Then, a week after the return home of President Jalal Talabani — who had been under medical treatment in Berlin for the past 1½ years and who obviously couldn’t continue with his functions — a new president was elected, indicating that Iraq could actually be more resistant to division of the country.

This writer has known the man elected president, Fouad Massoum, for nearly a quarter of a century. I got to know Massoum through his predecessor, Talabani, my close friend for more than 40 years. During tumultuous years that included the Gulf War of 1991, he was one of Talabani’s most trusted envoys and comrades-in-arms.

Five years younger than Talabani, Massoum, 76, was born in Koysancak in 1938, a town close to Erbil where Talabani spent his childhood; they have been friends ever since.

Massoum studied in religious schools until he was 18 and ended up at Cairo’s Al-Azhar University, the most prestigious center of learning for the Sunni world. He received his master’s in Islamic studies and his doctorate in philosophy.

Massoum’s political life started as a member of the Iraqi Communist Party in 1962, a galvanizing assembly of dissent for people of Shiite and Kurdish origin. He left the party after traveling to Syria and joining the Kurdistan Democratic Party (KDP) of Mullah Mustafa Barzani, who had ignited the Kurdish uprising against the Arab authorities in Baghdad. In 1968, he became a university professor in Basra in southern Iraq, and headed the KDP office there.

In 1973, he became Cairo representative for Mustafa Barzani, the then-leader of KDP and the father of current KRG President Massoud Barzani. The same year, Talabani, heading the leftist-Marxist faction of the party against Barzani, became the party’s Beirut representative and engaged with Palestinian organizations that had made Beirut the center for the Palestine Liberation Organization.

Massoum remained in this position until 1975, when he left to become one of the six founding members of the PUK (Patriotic Union of Kurdistan) along with Talabani.

In the PUK hierarchy, Talabani was the uncontested No. 1, followed by the current leader of the Goran (Change) Movement, Nushirevan Mustafa, and the legendary peshmerga commander Kosrat Resul. The next tier consisted of Massoum and Latif Rashid, the brother-in-law of Talabani.

After the 1991 Kurdistan regional uprising, Massoum become the first prime minister of the Sulaimaniyah region. Iraqi Kurdistan had a dual government at the time, with Erbil under Barzani (KDP) and Sulaimaniyah under Talabani (PUK) rule. Ever since, Massoum has remained a loyal friend and confidant of Talabani.

In the history of Iraq, only two people have been democratically elected as president and both were Kurds. Jalal Talabani became the first non-Arab president in 2005, followed now by Massoum.

Massoum was the candidate of the Kurdish Alliance and after two election rounds in the federal parliament, he became the second Kurdish president of Iraq by winning 211 out of a total of 275 parliamentary votes.

The process and procedural details that led to Massoum’s election reveal some lesser-known facts about the Kurdish political arena that have implications for the current political situation and future of Iraq and its neighborhood. There are 63 Kurdish members of the Iraqi parliament. That Kurdish bloc had to nominate a Kurdish candidate for the post of president that was allocated to the Kurds by an earlier gentlemen’s agreement.

The Iraqi parliament was scheduled to convene July 24 to elect the president of Iraq. Late July 23, in a closed-door gathering in Baghdad, Kurdish members of parliament voted for their presidential candidate in a contest between PUK senior leaders Massoum and Barham Salih.

In a close race, Massoum won a majority, 30-23. The rest of the Kurds' parliamentary bloc was absent.

This voting pattern shows that Turkey, and its closest ally in the region, the KDP, tilted toward Salih. His candidacy had been opposed earlier by a powerful PUK figure, Talabani's wife, Hero Khan. There were widespread rumors in Sulaimaniyah that Iran, which has a strong behind-the-scenes presence in the area, had been backing her for a long time. A third contender for the post, the governor of Kirkuk, another Talabani loyalist, Najmaddin Kerim, had been opposed by Barzani.

Massoum emerged as a compromise candidate for various Kurdish factions. He has been in the Iraqi parliament since 2005, was the acting speaker for a while and also had chaired the committee that drafted the constitution. Massoum had strong credentials and good relations with both Sunnis and Shiites in Baghdad. He is a personally endorsed by Talabani and cannot be opposed by Barzani.

From these and other developments we can conclude that the United States (which doesn’t support the independence of Kurdistan and favors an inclusive Baghdad government with renewed power-sharing) and Iran (which has openly said it is against independence for Kurdistan) were pleased with the quick election of Massoum as president.

There were also strong rumors in Baghdad that the United States was also in favor of Salim al-Jabouri, a Sunni Arab, as speaker of parliament.

Following the election of Massoum, Iraq was actually and surprisingly ahead of the constitutional timeline for forming its next government. The most problematic task will be agreeing on a prime minister. Nouri al-Maliki, whose State of Law Coalition list gained more seats more than any other party, has no inclination or willingness to leave his post. The new president has 14 days to nominate the prime ministerial candidate from the largest bloc in parliament.

The name of Maliki is problematic, but any other name is no less so. What is interesting is that Massoum, after he won the presidential post, swore to protect the unity of Iraq as the president of the country that he himself helped write the constitution for in 2003. That would be oxymoron to bring forward the issue of an independent Kurdistan, seceding from Iraq, while a new Kurdish president in Baghdad has taken an oath to preserve the unity of the country.

There is no doubt that Massoum’s presidency has a tacit blessing from Iran, has pleased Washington and put Erbil on hold with its main ally in Ankara.

With the Kurdish Massoum in the presidential seat, Kurds’ eyes are once again focused on Baghdad. But, their quest for Kurdish independence has had to be postponed and put on the back burner for a while.