The preliminary electoral results in Iraqi Kurdistan show the Kurdistan Democratic Party (KDP) to be the biggest winner, with the new Movement for Change coming in second. 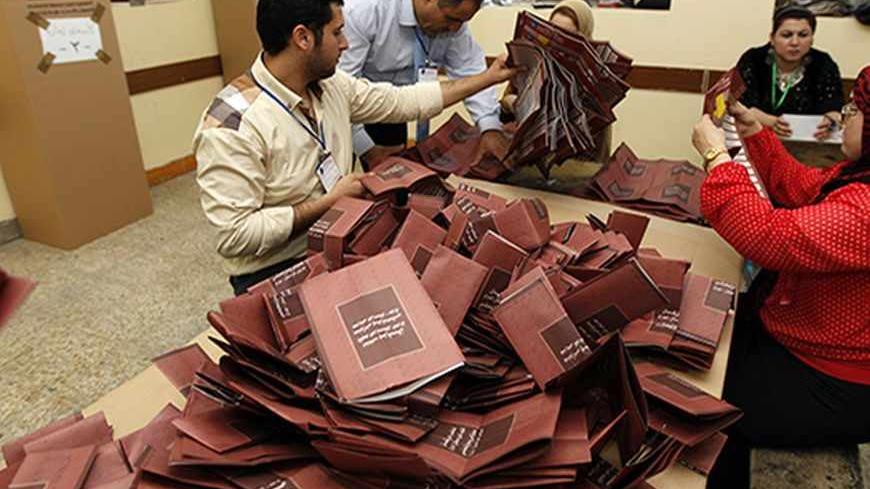 The Iraqi election commission decided to postpone declaring the election results in Iraqi Kurdistan because fraud accusations were made by the oppositionist Movement for Change against its adversaries — the Patriotic Union of Kurdistan (PUK), led by Iraqi President Jalal Talabani, and the Kurdistan Democratic Party (KDP), led by Kurdistan Region of Iraq President Massoud Barzani.

Despite that, preliminary electoral results pointed to a new political map in the Kurdistan Region of Iraq, which is trying to present a successful economic model compared to the rest of Iraq.

The preliminary figures cited by the parties, observers and independent organizations were based on polling station counts. The results showed the KDP in first place with 37.4% of the vote, which would give the party about a third of the total seats. Parliament is comprised of 111 seats, in addition to the 11 seats reserved for non-Kurdish minorities, which have traditionally been close to Barzani.

The KDP’s main ally, Talabani’s PUK, slipped to third place with 16.6% of the vote. The Movement for Change came in second place with 24.7%, followed by the Kurdistan Islamic Union with 9.8 %, the Islamic Group with 6.1%, al-Haraka al-Islamiyya with 1.2% and 4.2% for the other parties.

These figures are subject to change. A source from the Electoral Commission in Erbil told Al-Monitor that approximately 40% of the 150,000 votes of the security forces and of the Iraqi Kurdistan guard — the Peshmerga — will go to Barzani’s party.

The official results are expected to be announced on Sept. 30, but the overall standings are not expected to be affected, prompting some within the PUK — including the deputy head of the party, Barham Salih — to recognize the party’s decline. He said, “The loss is harsh, but denying the people’s will would be shameful,” in reference to accusations by the Movement for Change that the PUK and the KDP are trying to rig the results.

The proposed scenarios for the alliances that would form the Kurdistan government had surfaced before the election results were announced. The KDP has declared its wish to form an alliance with the PUK and the Islamic Union to form a government, while keeping the Movement for Change in the opposition, according to KDP General Secretary Fadel Mirani.

But such a scenario — which maintains the strategic alliance between the KDP and the PUK — will be done according to different conditions than before, when the premiership was equally divided between the two parties, with each party controlling that post for two years. Moreover, the election results may result in the PUK losing the presidency of the Republic of Iraq in favor of Barzani, who would then control the keys to politics in both Erbil and Baghdad.

However, the new strong horse on the Kurdish political scene, head of the Movement for Change Nawshirwan Mustafa, is closely watching what will happen to his former party, the PUK, in the absence of its historic leader Talabani.

Sources in Sulaimaniyah — the stronghold of the two parties — told Al-Monitor about side discussions going on, to unite the PUK and the Movement for Change because that may give them enough parliamentary seats to form a government with Islamist parties.

Despite the difficulty of this option, it is being considered even within the PUK, which cannot compensate for its electoral loss and enter into an alliance that ensures its interests in Baghdad and Erbil without pressuring Barzani by implicitly threatening an alliance with Mustafa, who was a founding member of the KDP but had poor relations with Barzani.

The PUK’s room for maneuver will not be significant as long as its leader is absent. There are several power centers in the PUK squabbling for the party’s top position. Barzani has other choices in case he is pressed too much. He could ally with the Movement for Change and keep the PUK in the opposition.

The intra-Kurdish balances saw a lot of unrest in the 1990s, when there was a civil war between Talabani and Barzani. That war resulted in two different and independent administrations in Erbil and Sulaimaniyah.

Things stabilized only after the political change in Iraq in 2003, when the Iraqi political process allowed for redistributing the roles between the two historic Kurdish leaders. Talabani became Iraq’s president, while Barzani governed the Kurdistan region. That role distribution was the main reason behind the strategic alliance between the two parties after their long dispute.

The elections in the Kurdistan Region of Iraq are important, because they allow the power balance to be measured. Barzani — the biggest winner — knows more than anyone that political calculations are more important than the number of parliamentary seats, especially at this historically sensitive stage for the region’s Kurds. So, Barzani is likely to maintain his alliance with the PUK and the party’s unity, to overcome the post-Talabani crisis.

Despite the media’s focus on Talabani’s party, about its fate in light of the electoral results, about its ability to form a unified strategy for the next stage and about the PUK’s insistence of hanging on to Talabani’s symbolism while neglecting to work on clear mechanism to deal with the future, the elections imposed a reality that cannot be ignored. The strength of the new Movement for Change lies in its internal unity and clarity of leadership, in the fact that it presented an anti-corruption reformist political program and in its exploitation of the emotional memories of the competitive relationship between Sulaimaniyah and Erbil.

It is noteworthy that the Kurdish elections were not affected by the political changes in the region, particularly in terms of the Islamist parties’ popularities. Many observers erroneously predicted that Kurdish Islamist parties will see their support grow in light of the rise of Islamist forces in the region. The fact that this did not happen indicates that Kurdish nationalism is still a fundamental factor in the Kurdish popular mood.