The Patriotic Union of Kurdistan (PUK) did well in the Iraqi national elections, and may be flirting with Prime Minister Nouri al-Maliki to strengthen its hand in Iraqi Kurdish politics. 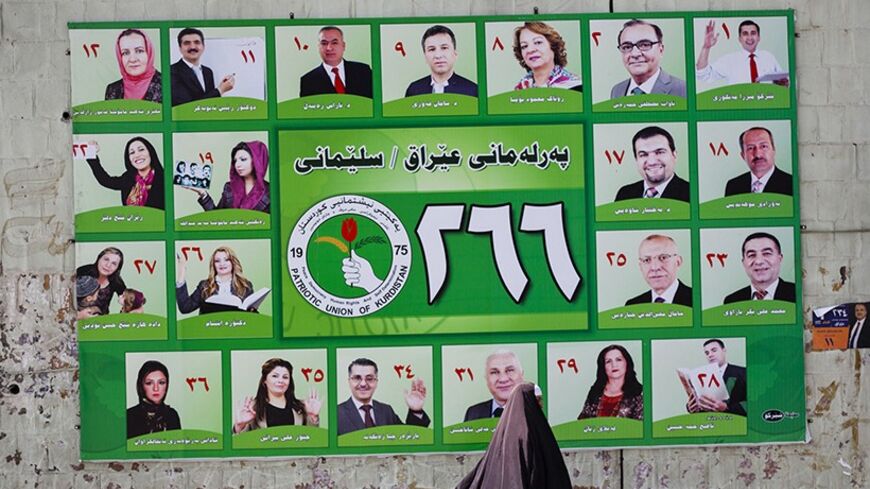 Have Iraq’s Kurdish forces overcome their internal differences and decided to go to Baghdad with a unified voice, as they announced on May 17 at a meeting chaired by Kurdistan Region President Massoud Barzani?

Or have the controversies that followed the rise of the Change Movement in the Kurdistan region’s elections in 2013 at the expense of the Patriotic Union of Kurdistan (PUK), led by Jalal Talabani, cast a shadow on the nature of the Kurdish-Kurdish internal balances in Baghdad? These controversies include the post-2013 agreement whereby the Kurdistan Democratic Party (KDP) would form a government in collaboration with the Change Movement, the PUK’s rejection of this agreement, and then the delay in forming a government until after the results of the Iraqi elections were announced.

This question found resonance before the April 30 Iraqi elections. The Kurdish parties participated in the elections independently from each other, and the results were announced on May 19. The KDP, led by Barzani, won 25 seats from the three Kurdistan districts, in addition to Ninevah, Kirkuk and Diyala. PUK won 21 seats from the above provinces and Saladin. The Change Movement won nine seats, the Islamic Union four seats and al-Jamaa al-Islamiyya three seats.

According to the election results, PUK has shown that it overcame its poor showing in the 2013 elections of Iraqi Kurdistan and has recovered the No. 2 spot from the Change Movement. This shift has changed the political calculations to form a provincial government, and the agreement now is to give PUK the deputy prime minister post. The latter post is expected to go to Talabani’s son Qubad Talabani as a way to prevent the expected political conflict and the prospects that the agreement of the Kurdish forces may unravel over the mechanics of negotiating with Baghdad. However, differences remain over the interior minister post, which the PUK is requesting.

The point of intersection between the main Kurdish forces seemed to have occurred when the PUK leaked its intention to nominate Kirkuk Gov. Najemeddin Karim for the presidency of the republic, through a separate agreement with Prime Minister Nouri al-Maliki. However, Barzani strongly rejected that.

PUK hinting at possible independent deals with Maliki to form a government coincided with Maliki announcing that he intends to form a government of a political majority, and a leak that Maliki may ally with the PUK independently of the other Kurdish forces. This could lead to the exclusion of political forces that oppose a third term for Maliki, including the KDP, led by Barzani. That the PUK may reach an independent deal with Maliki worsened Kurdish internal fears about a great split in the political structure of the Kurdistan region.

But the two main Kurdish parties have denied these possibilities. The member of parliament (MP) for the PUK in the Kurdistan region’s parliament, Picard Dilshad, told Al-Monitor, “The PUK has had an influential role in the Iraqi political process, represented by President Talabani, who managed to keep the civil peace. Even though he is absent now, we believe in reaching a consensus among the Kurdish forces about the region’s policy toward Baghdad to secure the rights of the Kurdish people and achieve what has not been achieved during the past years. This is what actually happened during the last meeting with Barzani.”

She said, “It is too early to talk about [electing a new] president of the republic. One of the points of the meeting of the Kurdish forces was to do a referendum to determine the [Kurds’] fate if the figures that will be nominated for sovereign positions don’t have the Kurds approval. We have had fundamental differences with Baghdad. These difference will be among our priorities, without drawing red lines on holding talks with any party except the [hard-line Arab] parties. The issue of resolving the decision of the presidency is linked to the Kurdish parties reaching an understanding on a joint decision. It is true that the post was part of our share in accordance with the strategic agreement with the KDP. It’s too early to talk about an agreement on this matter now, but of course we will have an opinion about it.”

KDP deputy Abdul-Salam Barwari told Al-Monitor, “The debate between the PUK and the KDP cannot be described as disagreements. The [KDP] emphasizes the principle of consultation to reach an agreement. The PUK considers the presidency to be part of its share under the strategic agreement signed between the two parties. But the Kurdish forces have not yet addressed this matter or even identified the candidates. … The Kurds should not accept the policy pursued by Maliki, who makes all state positions have no value. And the Kurds have agreed to send a unified delegation to present a paper containing the major points.”

On the subject of the presidency, he said, “I don’t want to assert whether or not the PUK wishes to have the post of the presidency because that depends on the election results and other parties joining in developing a work formula. The presidency of the [Kurdistan] region confirmed the need to discuss it in the region’s parliament, especially since the two parties have been accused of making unilateral decisions.”

From the latest Kurdish meeting there was a leak about an agreement to move to self-determination or resort to “confederalism” and amend the constitution to get rid of the pressure from Baghdad. That matter was clearly expressed by deputy parliament speaker and KDP figure Aref Tayfur in a statement on May 18.

The confederation option triggered a response from Maliki in a conference after the election results were announced. He said that “confederalism” and the Kurds’ right to self-determination were not in the constitution.

It seems that this issue is controversial even within the Kurdish forces. On that issue, MP Barwari told Al-Monitor, “There is a general internal consensus that the Kurdish people have the right to independence. But logically this depends on whether there’s an atmosphere on the possibility of living with Iraq. We have already chosen the road to federalism. But if the constitution keeps being violated, we have no choice but to find an alternative. The confederalism proposal is a reaction to Baghdad’s policies. We have even seen the PUK blaming Kurdish forces and claiming to be the only party calling for self-determination.”

This reference to the PUK in Barwari’s statement seems to part of the permanent intra-Kurdish sparring about the legitimacy of each party to represent the aspirations of the Kurds. MP Dilshad told Al-Monitor, “We should not put forth a proposal to change the nature of the regime in Iraq if there is no consensus among the Kurdish political forces, especially in the case of secession or confederation. No Kurdish person or political party should submit a proposal without the others. The options should be subject to a study [to determine] how important and useful each option is to the Kurdish people. Some KDP figures may issue differing statements in this regard, and that will have a negative effect on the Kurds. We assert that no political side can decide the fate of the Kurdish people alone.”

In summary, the election results will prolong the Kurdish internal debates and may produce more mutual accusations between the parties, but the Kurds will not depart from their internal consensus about the position toward Baghdad.