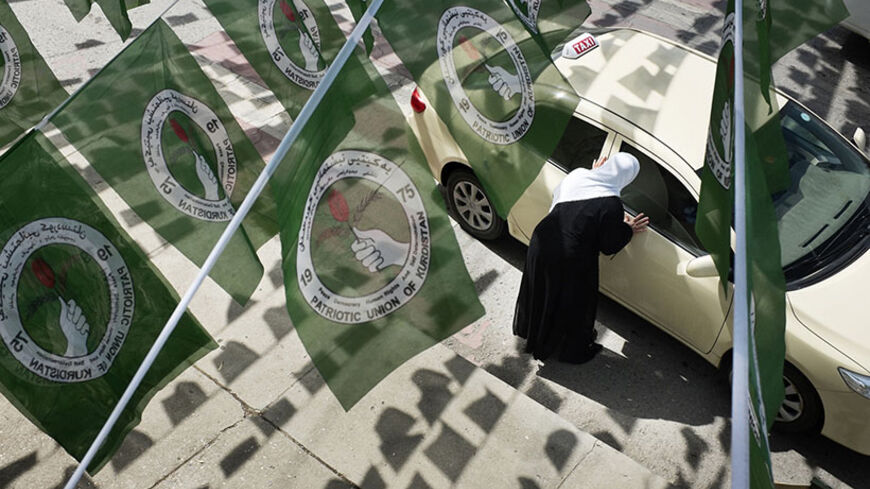 A woman hails a taxi while standing under Patriotic Union of Kurdistan (PUK) logos in Sulaimaniyah, April 28, 2014. - REUTERS/Jacob Russell

Although the current chaos in Iraq has brought the Kurds there closer to their long-held dream of independence, it has not brought them unity. While Massoud Barzani, president of the Kurdistan Democratic Party (KDP) and the Kurdistan Regional Government (KRG), campaigns for Kurdish independence, other Kurdish political groups have taken a different position, in particular the KDP’s main rival, the Patriotic Union of Kurdistan (PUK).

On July 3, Barzani addressed the KRG parliament in a closed-door session, during which, according to a source who attended, he discussed his latest diplomatic efforts to gain international support for independence. The source, who requested anonymity, said that Barzani was not clear regarding a referendum on Kurdistan’s independence, as opposed to what is being reported in the media.

Part of the backdrop to the Kurdish independence question involves the competition between Turkey and Iran for greater influence in Iraqi Kurdistan. Some Iraqi politicians are concerned that Ankara's subtle support for Kurdish independence stems from the aspiration that the KRG will eventually become a vassal of Turkey. Ankara and the KDP have developed strong, particularly economic, ties, while relations between Iran and the PUK are strengthening.

An Iranian delegation led by Hassan Danaeifar, Tehran's ambassador to Baghdad, visited Sulaimaniyah July 6 to talk with representatives of the Gorran movement, which came in second in KRG elections last year, and PUK officials about recent developments. Some interpret the meetings as a sign that Iran wants to bring the two parties closer. In the meeting, Danaeifar reportedly asked Gorran and the PUK to support Nouri al-Maliki's efforts to remain Iraqi prime minister.

Adel Murad, a PUK co-founder and secretary of the party's Central Committee, expressed his differences with Barzani regarding possible independence and warning that the current support from Turkey and Israel for the Kurds would not last. Murad supports Iraq’s division into three federal entities whereby Arab Sunnis would also enjoy a degree of autonomy. Najmaddin Karim, Kirkuk’s governor and a leading figure within the PUK, has also opposed Barzani’s approach to independence. In a July 8 interview with Kurdistan New, Karim underscored that the PUK has been working for self-determination, but still wants to do everything legally, through Baghdad, including holding a referendum on Kirkuk.

In the first session of the new Iraqi legislature, on July 1, Kurdish parliamentarians walked out after a war of words erupted between some of them and members of Maliki's State of Law Party. Karim and Alla Talabani, another PUK member and outspoken critic of Barzani, remained in the chamber.

All the Kurdish political parties have agreed to form a committee to negotiate with the other Iraqi parties to discuss forming the new cabinet, but the PUK leaders Karim, Murad and Lateef Rasheed met as a group with Maliki and Ibrahim Jaafari, head of the National Reform Trend, outside the framework agreed to by the other Kurds.

The KDP is concerned about the PUK’s moves while discussions are ongoing about possible independence. Hemin Hawramy, chief of KDP foreign relations, told Awene News that the PUK should not allow anyone within the party to create a fissure in Kurdish unity. He also said, “There are some people within the PUK who are against an independent state of Kurdistan if it is announced at the hands of Barzani.”

Kirkuk and its oil have become another point of contention between the KDP and PUK. The city is currently a PUK stronghold, with the party holding six of its 12 seats in the Iraqi parliament to the KDP's two. The peshmerga forces that took over and currently hold Kirkuk are PUK-affiliated and claim that they, not the KDP, is fighting the Islamic State (formerly the Islamic State of Iraq and al-Sham, or ISIS).

Barzani held a press conference in Kirkuk June 26, a statement on which was posted on his Facebook page, asserting, “We deem it unnecessary to discuss Article 140 of the constitution or raise any questions relating to it.” Article 140 concerns the holding of a referendum to determine whether Kirkuk will remain under Baghdad’s direct control or be incorporated into the KRG. His remarks, however, were dismissed by Murad and Karim, both of whom reiterated that Article 140, as a constitutional provision, needs to be decided in Baghdad.

The calls for Kurdish independence have also exposed differences within the PUK. Some PUK leaders find the independence drive a tool to serve Turkey’s interests in the region, while other PUK leaders are for independence if Iraq fails to become a fully democratic state.

Indirectly responding to the opposition of some PUK leaders to Barzani’s position on independence, Qadir Hamajan Aziz, a PUK political bureau member, wrote in the party's daily, Kurdistan New, that he supports Barzani’s bid for Kurdish independence. PUK political members Barham Salih, Azad Jundyani, Omer Fatah and Adnan Mufti hold that if Iraqi governance does not go according to their wishes, independence remains a Kurdish right.

The Gorran movement, led by Nawshirwan Mustafa, takes the position that the Kurds have a right to independence, but that the institutions of an independent state should be constructed prior to the state's declaration. KNN, a TV network close to Gorran, reported on July 6 that Mustafa believes Kurdish claims of independence should not only be based in rhetoric, but also on democratic, accountable and transparent rule. Gorran is unlikely to go against the KDP after agreeing to form a KRG cabinet with Barzani’s party on April 17. In addition, competition between Gorran and PUK for the governor's seat in Sulaimaniyah has pushed Gorran closer to the KDP.

The Islamic Union of Kurdistan and the Islamic Group of Kurdistan, which have a combined 16 seats in the KRG parliament, support independence of Iraqi Kurdistan, but not at the expense of democracy and reforms. Marwan Galali, head of the Islamic Group, told Barzani in the July 3 meeting that Kurdish unity should be reflected in local politics, pointing out that the KDP had formed the Dahuk and Erbil local governments alone. The Kurdish political parties had agreed on a broad-based government, and all of them are part of the current KRG. There is concern, however, that with the KDP's exclusion of the PUK and others in Erbil and Dahuk, the PUK might decide to exclude others from the government in Kirkuk, where it holds the majority, which would potentially negatively impact Kurdish unity.

Despite the hopeful aspirations for independence, divisions among the Iraqi Kurdish parties and figures, as well as increased meddling by foreign powers, might undermine the push for a sovereign Kurdish state.