After several months of stalemate, Iraqi Kurdistan's two ruling parties announced this month a draft agreement on how to share power for the next four years — but the deal is already fraying. 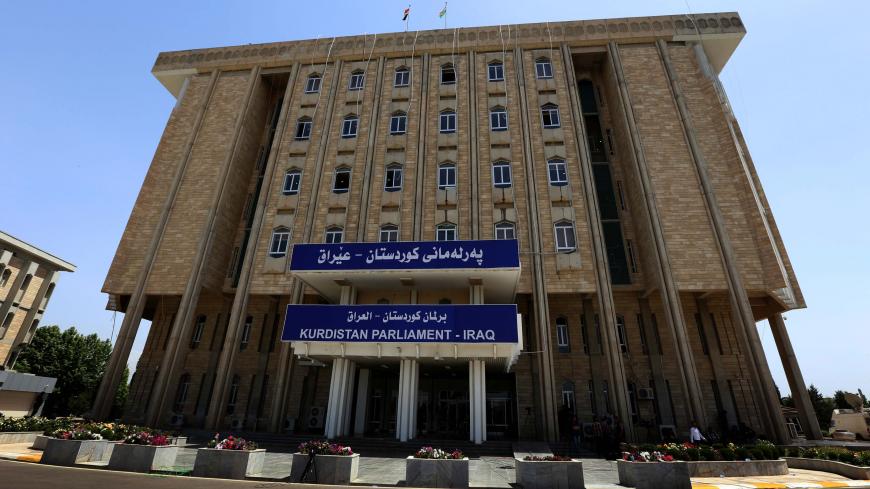 Iraqi Kurdistan parliament members — or some of them, anyway — held their first session Feb. 18, electing an interim speaker and nominating candidates for top government posts amid a boycott by its second-largest party, the Patriotic Union of Kurdistan (PUK).

Two members of the influential Barzani family, cousins Nechirvan and Masrour, were nominated as president and prime minister, respectively. Vala Fareed became the first female parliament speaker in the region. She was nominated by the largest party, the Kurdistan Democratic Party (KDP), but is to be replaced by a PUK nominee once the parties settle their disputes.

The two ruling parties announced Feb. 5 that they had reached a draft agreement for forming a government. The pact covers power-sharing, reactivation of the presidency, normalization of relations between the Kurdistan Regional Government (KRG) in Erbil and the Iraqi federal government in Baghdad, and — supposedly — dealing with controversies over Cabinet responsibilities.

But on Feb. 18, the PUK said it wouldn't participate without a signed, final pact.

Iraqi Kurds had voted Sept. 30 in parliamentary elections that were marked by low voter turnout and fraud. Of 111 seats, the KDP won the election by securing 45, followed by the PUK with 21 and the Movement for Change (Gorran) with 12. The new lawmakers were sworn into office in early November. Now, after months of negotiations, the region is still without a legitimate government, active parliament and official leaders.

As it stands now, the draft agreement reached Feb. 5 calls for a PUK representative to hold the Kurdistan parliamentary speaker post; members of the executive branch, the KRG, to hold the posts of deputy prime minister, Kirkuk governor and Iraqi justice minister; and the KDP is designated to determine the Kurdistan region's president, prime minister and deputy speaker of the parliament. However, the boycott indicates the agreement hasn't solved all differences between the two parties.

Both parties want the parliament activated to accelerate the formation of the new KRG Cabinet and the reactivation of the region’s presidency.

Masrour Barzani's father, Massoud Barzani, had been the Kurdistan region’s president since 2005, but he left the office in November 2017 after a September referendum for independence backfired. Though the referendum was overwhelming approved, it angered the central government in Baghdad, which then took back disputed territories in Kirkuk and other areas held by Kurds since 2014.

With Massoud Barzani gone, the Kurdish regional parliament suspended the presidency and divided his powers among parliament, the judiciary and his nephew Nechirvan Barzani, who has served as the region’s prime minister for almost 10 years.

Both the PUK and the KDP now want to control the region’s most important ruling positions, but their efforts might face fierce reaction from opposition parties, the public and Gorran, which so far hasn't indicated whether it will join the opposition or back the KRG Cabinet.

“[The] PUK and KDP’s agreement is an accord on distributing posts and money,” Abdul Razaq Sharif, a member of Gorran’s National Council, told Al-Monitor, pointing out this is his personal view and he doesn't speak for his party. He added, “Absolutely, the agreement is not in the sake of people's interests.”

Electing a leader for Kirkuk is another controversial topic between both ruling parties.

"We agreed on appointing a new governor for Kirkuk, and we are working to resolve outstanding issues in Baghdad,” the PUK's Pira said during a Feb. 5 joint press conference with his KDP counterpart. No one has been nominated officially.

The agreement must be accepted as an entire package. Until that happens, any single element can be changed.

KDP spokesman Mahmoud Mohammed told reporters that the draft agreement will be finalized by the end of February and then signed by both parties’ politburos.

Rakan Saeed al-Jabouri, an Arab, has been Kirkuk's controversial acting governor since October 2017, when Baghdad appointed him to replace Najmaldin Karim, a Kurd. Jabouri currently faces accusations of corruption.

The Kirkuk Provincial Council has been unable to convene since Iraqi forces took over after the referendum, which led more than half of the council's members to flee the disputed area, including the council's acting head, Rebwar Talabani.

Sheikh Burhan Mazhar al-Asi, head of the council's Arab bloc, told Al-Monitor it's unlawful to hold any council session outside the council building in Kirkuk. He stressed that Arab and Turkmen blocs would boycott any illegitimate session.

A PUK official from Kirkuk explained that the city's ethnic groups need to be appeased.

“[The] PUK’s priority is reactivation of the Kirkuk Provincial Council, where a Kurdish governor is to be elected and the needs of other ethnics will be met,” Rawand Mala Mahmud, deputy head of the PUK’s organizational center in Kirkuk, told Al-Monitor. He said the KDP agreed that Kirkuk’s new governor will be from the PUK.

Local citizens in the Kurdistan region have mixed reactions toward the ruling parties’ draft agreement.

“If both parties reach an agreement, I think it might be good for everyone, but this agreement should include improving people’s lives and distributing salaries,” a veteran of the Kurdish peshmerga forces in Sulaimaniyah told Al-Monitor.

Political observers say the agreement is critical for the Kurdistan region, but they caution that written pacts don't guarantee everlasting peace.

“An agreement is crucial for stability, in order for the KRG to be established, but … [the] PUK and [the] KDP have no trust with each other. Lack of mutual trust can lead to cancellation of the accords — even if they are good ones — at any moment,” Kamaran Mantik, a political science professor at Salahuddin University, told Al-Monitor.

Iraq needs to secure the provinces of Kirkuk, Salahuddin, Diyala and Mosul, where Kurdish peshmerga forces had an active role in the fight against Islamic State (IS) militants. Accordingly, an agreement that satisfies both the PUK and the KDP might serve Iraq's aim of stabilizing the disputed areas between Baghdad and Erbil.

The two parties have ruled the region since the 1991 uprising against then-Iraqi President Saddam Hussein. They fought a civil war between 1994 and 1998 in which thousands were killed. The war ended after both sides signed a US-brokered peace agreement.

In 2005, they signed an agreement to distribute power and oil, but the deal fell apart in October 2017 when the KDP accused a PUK faction of treason and surrendering Kirkuk to federal Iraq in the aftermath of the failed independence referendum.