The new prime minister of the Kurdistan Regional Government has a Cabinet now, with all but one ministerial position filled. 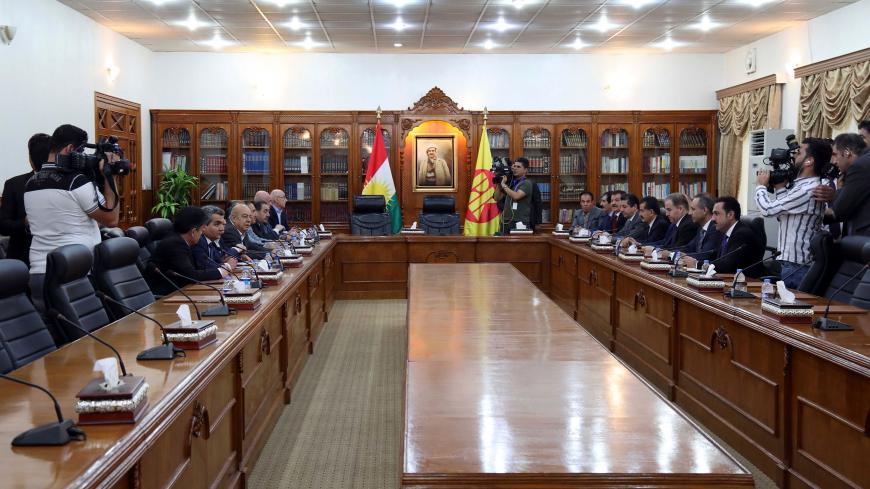 Three main parties in Iraqi Kurdistan were able to reach an understanding on their ministerial nominations to finally form the new government: the Kurdistan Democratic Party (KDP), Patriotic Union of Kurdistan (PUK) and Gorran (Change) movement. Parliament now has confirmed 21 ministers for the Cabinet, though the controversial post of the natural resources minister remains vacant.

In his inauguration speech, Barzani said that his cabinet’s top priority will be providing services to the people, combating corruption, carrying out reforms, and developing relations with Baghdad.

The omission of that key position is due to disagreements between KRG President Nechirvan Barzani, who insists on Ashti Hawrami remaining in the post, while Masrour Barzani insists on appointing someone of his own choosing. Nechirvan Barzani did not attend the parliament session, an apparent protest against the new Cabinet. The Barzanis are cousins.

The semi-autonomous region held parliamentary elections Sept. 30, but hadn't been able to form a Cabinet due to rivalries among the political parties — mainly between the KDP and the PUK. Out of the KRG legislature's 111 seats, the KDP won the election by securing 45 seats. The PUK came second with 21 seats, and Gorran came third with 12.

Appointing a new Kurdish governor for the oil-rich Kirkuk province has been the main obstacle to forming the KRG government, but last week the KDP and the PUK agreed to back a joint candidate, a source close to the regional ruling circles told Al-Monitor on condition of anonymity.

The parties selected Taib Jabar, a Kurdish engineer and poet from Kirkuk, as the new governor, replacing acting Gov. Rakan Saeed al-Jabouri, who is facing charges of corruption in office. According to the source, Jabar is close to the PUK, but doesn't have a partisan post. Influential neighbors Iran and Turkey haven't weighed in on the decision yet, the source added.

PUK spokesman Latif Sheikh Omar told Al-Monitor, "Concerning Kirkuk and the KRG, we and the KDP have made big steps forward."

As per their signed agreement with the KDP on Feb. 16, Gorran, previously an opposition party, was allowed to participate in the new Cabinet by selecting four ministers, the first deputy president and several senior government posts.

Khalil Sarkani, a member of Gorran's general council, told Al-Monitor, "We decided to participate in this Cabinet to make reforms by carrying out a shared government program. We didn't emphasize posts, rather we stressed reforms." The Cabinet can't succeed unless all participating sides in the government work together, he added.

"We have a number of time frames for making reforms. If the government doesn't make reforms, we will make our own decisions," he warned, without providing specifics.

Rewaz Fayaq, a woman, is the new parliament speaker. Begard Talabani, a female lawmaker representing the PUK in the Kurdistan parliament, spoke with Al-Monitor before her appointment as minister and pointed out, “I think all the political parties nominated women for ministerial posts.” She added, “We, as a group of Kurdish women leaders, held several seminars and put great pressure on the political parties to nominate women to run ministries in the new KRG Cabinet."

Having waited a long time, Kurdistan citizens hope the new Cabinet will be able to deal with the economic recession and high unemployment rate (estimated at more than 20% for the 18 to 34 age bracket), and normalize ties with the Iraqi federal government in Baghdad. However, some civilians and Kurdish critics say they see no bright future for reforms in the region, as both the KDP and the PUK are silencing journalists and activists through their own mainstream media, militias and oil resources.