Despite the decision by the Kurdistan Regional Government's President Massoud Barzani to step down, Turkish hostility toward him and his likely political successors has not abated. 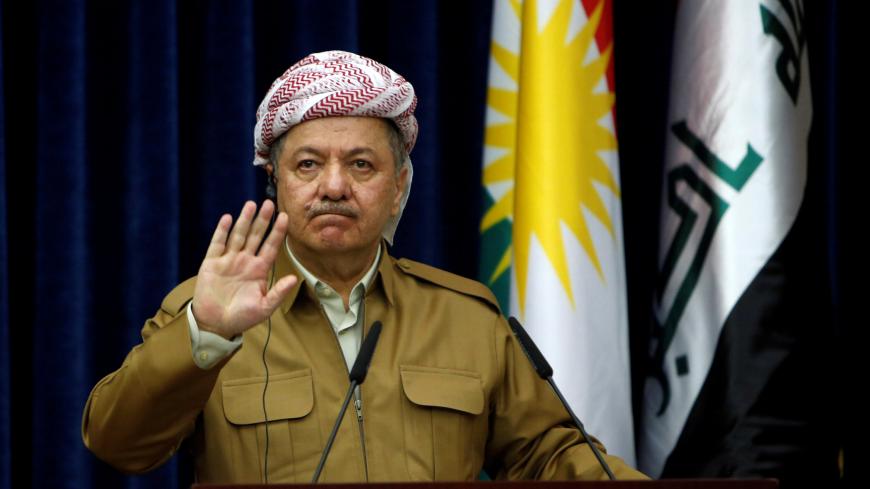 When Massoud Barzani, the president of Iraqi Kurdistan who is being blamed for the fallout from an ill-fated referendum on Kurdish independence, announced he would be stepping down Nov. 1, few believed it would bring a lasting solution to the crisis that has engulfed the beleaguered enclave. But many thought the move would assuage its critical neighbor and until recently top ally, Turkey.

Barzani’s refusal to heed Ankara’s warnings to shelve the referendum or at least exclude the oil-rich province of Kirkuk, claimed at once by Kurds, Arabs and Turkey’s ethnic kin the Turkmens, provoked fury in Ankara, prompting overt calls for the veteran Kurdish leader to step down. Turkey is thought to have been maneuvering behind the scenes to get Nechirvan Barzani, the prime minister and the elder Barzani’s nephew, to take charge of Iraqi Kurdistan in a plan said to be backed by Washington. In a statement that openly signalled its support for Nechirvan, the State Department said the United States "commends the decison of [Massoud] Barzani not to seek an additional term as president" and that it "now looks forward to engaging actively with the Prime Minister of the Kurdistan Regional Government, Nechirvan Barzani, and the Deputy Prime Minister Qubad Talabani." Nechirvan, who helped mastermind a mega energy deal inked with Turkey in 2013, has long enjoyed close personal ties with Turkish President Recep Tayyip Erdogan. As things currently stand, Nechirvan is widely expected to steer the enclave to parliamentary and presidential elections scheduled for June 2018.

Yet there are few signs that Turkish hostility toward the Barzanis has abated.

In a front-page story, the pro-government Yeni Safak screamed that Iraqi Kurdish peshmerga fighters had “slaughtered hundreds of civilians” and that Barzani’s resignation was nothing more than a ruse to hold onto power through his nephew. Other pro-government titles continue to strike a similarly antagonistic tone.

Apparently unsatisfied by the Kurds’ loss of Kirkuk, Turkish Foreign Minister Mevlut Cavusoglu has kept up Turkish demands that the Kurdistan Regional Government (KRG) annul the results of the referendum that was approved by 93% of voters. At the same time, Ankara is cheering on Iraqi forces as they reassume control over Fish Khabur, the wedge of territory where Syria, Iraq and Turkey meet. A deal for Baghdad to jointly administer border crossings with Turkey and Syria with the Kurds was meant to be finalized today. It would also allow Baghdad to regain control over a pipeline that has been pumping Iraqi Kurdish oil to export terminals on Turkey’s Mediterranean coast. As the Kurdish leadership licks its wounds, Karim Sinjari, who is both interior minister and minister for peshmerga affairs for the KRG, is leading US-brokered talks with Iraq’s Chief of General Staff Othman al-Ghanimi for a peaceful transition.

The pair was expected to travel to Fish Khabur for a reconnaissance mission of sorts today. Administration officials speaking on condition of anonymity told Al-Monitor that discussions were underway with Baghdad to ensure the continued flow of humanitarian aid and military supplies to forces allied with the US-led coalition against the Islamic State in Syria via Fish Khabur.

Since the start of the conflict in neighboring Syria, Iraqi Kurdistan has served as Turkey’s principle land bridge to the rest of the Middle East and remains among the biggest markets for Turkish consumer goods. The Turkish army has at least 2,000 troops deployed in the enclave and Barzani’s Kurdistan Democratic Party (KDP) has long cooperated with Ankara against the outlawed Kurdistan Workers Party (PKK). Last but not least, friendly relations with the Iraqi Kurds have helped Erdogan draw pious anti-PKK Kurdish voters to his fold. Western diplomats say with the return of Baghdad to its borders, Turkey will lose much of its maneuvering power in Iraq and over the Kurds, all to Iran’s advantage. So why the 180-degree turn?

Bilal Wahab is a Soref fellow at the Washington Institute for Near East Policy. He told Al-Monitor, “It's only been a day since Barzani announced he was going, thus it's too early to assess whether Turkey will at some point come to reclaim its investment in the KRG or not.” Much of Turkey’s recent bellicosity toward the Barzanis stems from Erdogan’s sense of personal betrayal. With nationalist politician Meral Aksener emerging as a potential rival for the presidency, Erdogan needs to prove he is a better nationalist and that means shrilly opposing any moves toward Kurdish statehood. But Wahab speculated that the shift in Ankara may well portend a structural shift in Turkish foreign policy back to its narrow anti-Kurdish lens. “The aim may be to cooperate with Iraq to isolate Rojava.” Wahab was referring to the Kurdish-controlled enclave in northern Syria that is administered by a PKK affiliate known as the Movement for a Democratic Society, or TEV-DEM. Even if Barzani had agreed to drop Kirkuk from the referendum, "Turkish opposition to it would have remained unchanged,” Wahab said.

Arzu Yilmaz, an academic at the American University of Kurdistan in Dahuk, concurs. “It's not just Turkey’s Kurdish policy that has changed,” she told Al-Monitor. “Its whole Middle East policy has changed.” Yilmaz noted that up until late 2014 Turkey had viewed peaceful relations with the Kurds as a vehicle for expanding its influence in the Middle East, but the Arab Spring and the rise of the Islamic State changed those calculations. “Turkey now sees it as in its interests to do business with national governments rather than non-state actors like the Kurds,” she said.

All of this marks the beginning of a protracted period of political turbulence inside the KRG.

Despite Massoud Barzani's efforts to keep his family united, many predict a power struggle within the KDP as Massoud Barzani’s eldest son Masrour, who is the KRG’s intelligence boss, jockeys for power to retain his influence. The other main political grouping, the Patriotic Union of Kurdistan (PUK), is already convulsed with bitter infighting with the widow and eldest son of the party’s recently demised founder Jalal Talabani accused of “selling out” Kirkuk to Iran.

A Western diplomat told Al-Monitor on condition of anonymity, “What we are left with is a very weak KRG with blurred lines of political authority, increased infighting within the KDP and the PUK and between the KDP and the PUK with [the opposition Movement for Change] Gorran throwing bombs from the outside.” And a weakened and divided KRG, Yilmaz reckoned, “will open up more political space for the PKK.” At the same time, Ankara's continued iciness could well propel the KRG to improve relations with the Turkish Kurdish outfit. Just how this benefits Turkey is anybody’s guess.