Turkey seems to be expressing its opposition to the Patriotic Union of Kurdistan's candidate for the Iraqi presidency by extending its ban on flights to Sulaimaniyah, but the move may represent the extent of Ankara's influence over political machinations in Baghdad. 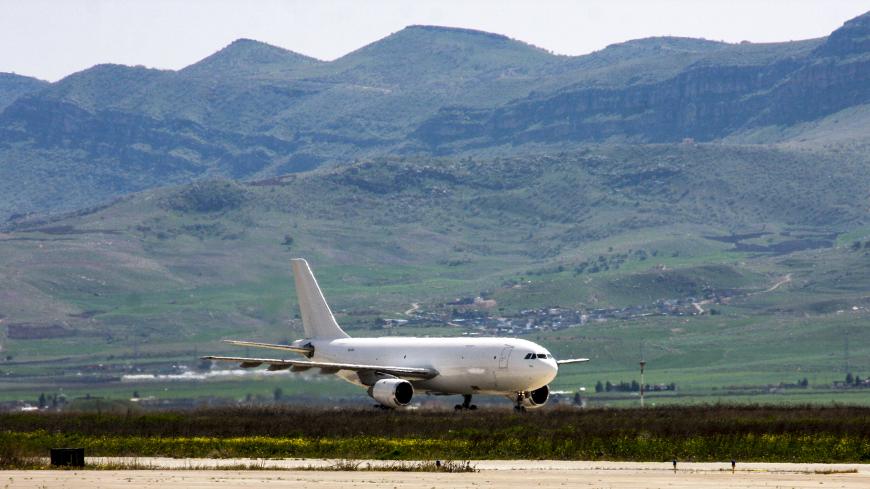 An Airbus plane is shown on the tarmac of Sulaimaniyah's airport, March 20, 2018. - Shwan Mohammed/AFP/Getty Images

As competition heats up among rival Iraqi Kurdish factions for the country’s presidency, regional power Turkey appeared to signal its preference by extending an ongoing ban on flights to Sulaimaniyah, where the Patriotic Union of Kurdistan (PUK) holds sway.

Tahir Abdullah, the official in charge of Sulaimaniyah airport, told the Iraqi Kurdish news portal Rudaw that the ban imposed in the wake of the Iraqi Kurds’ referendum on independence that was held a year ago would remain in effect until Dec. 24. Ankara had also halted flights to Erbil, the Iraqi Kurdistan Region’s capital, in keeping with the Iraqi central government’s ban on flights to the Kurdish region because of the referendum.

Baghdad allowed air travel to the region to resume in March. Ankara, however, continues to block flights to Sulaimaniyah. Turkey has not formally commented on any of the candidates for the Iraqi presidency, a largely ceremonial post that is traditionally allotted to the Kurds.

But sources familiar with Turkey’s Iraq policy said that Ankara was opposed to the PUK’s candidate Barham Salih, the urbane former deputy prime minister of Iraq who moves as easily in Tehran as he does in Washington and Baghdad and is acclaimed for founding and building the American University of Iraq Sulaimani into one of Iraq’s most prestigious academic institutions.

The extension of the flight ban was a clear sign that relations with the PUK remain frozen. “There is no particular hostility towards Dr. Barham but he’s the PUK’s pick, so that makes him undesirable,” one of the sources told Al-Monitor on condition of anonymity.

Salih, who spent long years in Washington and served as the Kurdistan Regional Government’s prime minister, was seen as a shoo-in until Massoud Barzani’s Kurdistan Democratic Party (KDP) announced that it was fielding Barzani’s longtime aide de camp, Fuad Hussein, against him. It marked a dramatic break from past practice whereby the KDP would retain the presidency of the Iraqi Kurdistan Region and the PUK would get Baghdad.

But bitter acrimony over the PUK's collusion against the KDP with Baghdad during and after the referendum, allowing Iranian-backed Iraqi forces to retake so-called disputed territories from the Kurds, including the oil-rich province of Kirkuk, has thrown that agreement out the window. KDP officials insist they will not withdraw Hussein's candidacy, saying their party is entitled to the post because it won seven more seats in the Iraqi Parliament than the PUK.

Hussein, a Shiite Kurd from Khanaqin, is the go-to figure for Western officials in their dealings with the KRG and is lauded for his discretion, intelligence and wit. He is seen as a sobering voice, a sort of éminence grise, in the cutthroat world of Kurdish politics. Though he keeps a low profile, Hussein has an extensive net of contacts in Baghdad as well.

Ranj Alaaldin, a visiting fellow at the Brookings Institution Doha, suggested that Hussein might stand a better chance because he brings more to the table than his rival. He explained to Al-Monitor, “Despite some suggestions that Salih is backed by Iran, that has more to do with Iranian calculations than it does Salih’s history and capabilities.” Praising what he termed Salih’s “impeccable political and strategic acumen,” Alaaldin observed that Tehran views Salih as “America’s man in Iraq and is deeply suspicious of his intentions.”

Hussein, on the other hand, could help “kick start a new chapter in Erbil-Baghdad relations that is defined and shaped according to an Iran-centric lens while also rolling back the Kurdish independence narrative and further shifting the KRG towards Iran’s orbit of influence.” Western sources with intimate knowledge of the political process argued, however, that both candidates would be equally palatable for Washington.

Not so for Ankara. Turkey remains at odds with the PUK over its perceived support for militants of the outlawed Kurdistan Workers Party (PKK). The group has been waging a 34-year insurgency initially for independence and now for self-rule inside Turkey. Since 1991 its commanders have been based in the Qandil mountains separating Iraq from Iran and are known to move around freely in Sulaimaniyah, unlike in KDP-controlled areas.

Relations between Turkey and the PUK took a sharp turn for the worse when the PKK captured two senior Turkish intelligence operatives and their local assets near Sulaimaniyah in August 2017.

Turkey expelled the PUK’s representative in Ankara, claiming that the group had leaked information on the whereabouts of its men to the PKK.

The PUK’s late founder and former Iraqi President Jalal Talabani's family members are believed to have played a critical role in helping forge the ongoing partnership against the Islamic State between the Pentagon and the PKK’s Syrian affiliate, known as the People’s Protection Units (YPG).

The alliance struck in 2014 has seen the YPG expand its control across northeastern Syria and a concurrent souring in Turkish-US ties. Turkey’s President Recep Tayyip Erdogan renewed threats to take military action against the group in areas east of the Euphrates River in Syria, where several thousand US special operations forces are based.

“God willing, in the period ahead we will increase the number of secure zones in Syria, encompassing the east of the Euphrates,” he said in a weekend speech in New York, where he will be attending the 73rd session of the UN General Assembly before heading to Berlin. Turkey has already taken action against the YPG west of the Euphrates in the Russian zone of control, driving the militants out of their Afrin stronghold in March. Turkey has meanwhile intensified military operations against the PKK in Iraq, killing a key leader in Yazidi-dominated Sinjar in August.

Unlike Iran and the United States, Turkey has no real influence, however, over political machinations in Baghdad. Thus its preference for the country’s new leaders is unlikely to have much of an effect, analysts say. “Part of the reason that Turkey currently has lesser impact in Iraq is that it's distracted by Syria, so it's absent in the horse-trading over the next Iraqi president and prime minister alike,” said Bilal Wahab, the Nathan and Esther K. Wagner fellow at the Washington Institute for Near East Policy. Wahab noted in an interview with Al-Monitor that Turkey’s Iraqi Sunni protégés such as former Ninevah Governor Atheel Nujaifi and his brother Osama had suffered a string of setbacks, leaving Ankara with even less sway. The latter, a former speaker of the Iraqi Parliament, scored poorly in the race for the speakership that was won by Mohammed al-Halbusi, the former governor of Anbar province.

Barzani’s decision to press ahead with the independence drive in the face of Ankara’s fierce objections has also cooled once strong ties between Turkey and the KDP.

Erdogan continues to enjoy a close personal relationship with Barzani’s nephew and KRG Prime Minister Nechirvan Barzani, however, and even at the height of tensions over the referendum did not interrupt the flow of Kurdish oil to export terminals on Turkey’s Mediterranean coast.

But Turkey’s continued attacks on PKK bases in Qandil, causing casualties among Iraqi Kurdish civilians, is a “huge embarrassment” for the KDP leadership, Wahab said. The net result, he concluded, was that the Kurds find themselves turning to Baghdad for support against Turkish incursions as Turkey reverts to its default setting of viewing Iraq through an anti-PKK lens. On Sept. 16 the Iraqi government announced that it would be deploying border guards between Turkey and Iraq to prevent further breaches, presumably by Turkish troops. It's unclear, however, whether it is able or willing to halt Turkish airstrikes against PKK camps, operations that remain the top cause of civilian losses in targeted areas.