A delegation of Iraqi Kurds from rival political parties arrived in the Syrian Kurdish enclave of Afrin in a show of Kurdish solidarity. 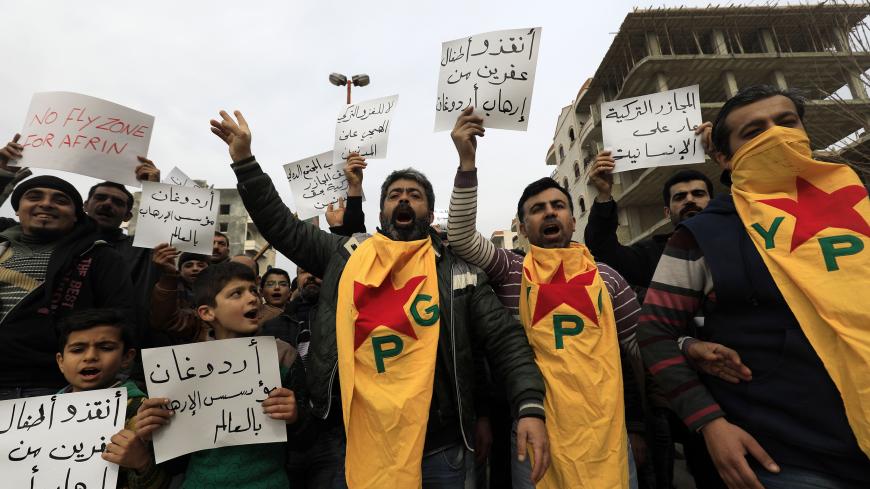 Kurdish disunity is cited as one of the main reasons the world’s largest people without a country, as the Kurds are often described, still don’t have one. The Iraqi Kurds’ failed referendum on independence in September, which saw one group cooperate with Baghdad against the other, was the most recent and damning example of how a lust for power can trump the collective Kurdish good. So when a delegation of Iraqi Kurds from rival political parties arrived in the Syrian Kurdish enclave of Afrin to show solidarity with their cousins facing a Turkish siege, a groundswell of euphoria erupted.

Her comments were reported by Kurdistan 24, one of the few media outlets to make it into Afrin. It's believed to be financed by the Kurdistan Regional Government (KRG)'s muscular intelligence chief, Masrour Barzani. Kurdistan 24 journalists would have had to cross through territory controlled by Syrian regime forces and their Iranian allies to reach Afrin, a journey that Western journalists, Americans in particular, would hardly risk.

On Jan. 30, the Iraqi Kurdish parliament held a special session on Afrin and condemned Turkey’s offensive against the PYD’s military arm, the People’s Protection Units (YPG), which has entered its 24th day. The parliament called for an immediate halt to Turkish aggression and pledged to step up humanitarian assistance to their besieged brethren via the Fish-Khabur border crossing, saying, “We praise the resistance of the men and women in Afrin and Rojava [Syrian Kurdistan] and wish them success.” The session was convened at the request of Barzani’s Kurdistan Democratic Party (KDP), which is led by his father, Massoud, the former president of the Iraqi Kurdistan Region, and that of the opposition Change (Gorran) Movement. But this outburst of cross-border Kurdish unity may come at a cost.

Until recently, Turkey viewed the KDP, the dominant party in Iraqi Kurdistan, as its top ally against the Kurdistan Workers Party (PKK), the armed group that first fought for Kurdish independence and later for Kurdish self-rule inside Turkey since 1984. The YPG was birthed by the PKK and pledges fealty to its imprisoned leader Abdullah Ocalan. In Turkey’s eyes, any support for the YPG is tantamount to support for the PKK, and that is how it is likely to view Iraqi Kurdish gestures over Afrin.

Although Turkey fiercely opposed the referendum on Kurdish independence, it did not seal its border with the KRG, the Iraqi Kurds’ sole conduit to the West. Nor did it turn off a pipeline carrying Iraqi Kurdish crude to export terminals on Turkey’s Mediterranean coast. Now that the Iraqi Kurds have lost control of oil fields in Kirkuk, Turkey is even more critical to their economic survival. So why are they poking Turkey in the eye?

There are several reasons for the apparent shift. Amid the sharpening economic woes that have beset the KRG in the wake of the referendum, Kurdish nationalism serves as a useful distraction for an increasingly disgruntled populace. Also, the solidarity felt by ordinary Kurds for their Syrian cousins is real. For many, the PKK and the YPG have displayed great valor against the Islamic State and now Turkey. And the sober lifestyle embraced by PKK commanders holed up in the mountains stands in stark contrast with the opulence — and corruption — engulfing some of their Iraqi Kurdish peers.

Mohammed Salih, an expert on religious extremism in Iraqi Kurdistan and an Al-Monitor contributor, said in an interview, “The YPG’s ability to fight and resist Turkey and [Syrian Arab rebel] groups in Afrin is taking on huge significance for average Kurds in light of the peshmerga's inability last year to put up a fight in Kirkuk and other parts of the Iraqi Kurdistan Region.” Salih was referring to the retreat of Iraqi Kurdish fighters known as peshmerga from the contested oil-rich province in the face of advancing Iraqi troops and pro-Iranian militias.

Elections for a new parliament and president are supposed to take place this year. “Iraqi Kurdish political parties want to capitalize on the sympathy felt for Afrin,” said Bilal Wahab, a Wagner fellow at the Washington Institute for Near East Policy, a conservative DC think tank.

But there are more subtle dynamics at play. Since the referendum, Turkish leaders have shunned formal contact with the Iraqi Kurds, including Nechirvan Barzani, the KRG prime minister. He was long viewed as Turkish President Recep Tayyip Erdogan’s go-to Iraqi Kurdish politician, especially for energy deals. Erdogan is keeping his distance from the Iraqi Kurds in a sop to his far-right nationalist allies, whose backing will be key in Turkey's 2019 presidential elections.

The KRG’s relations with the United States have also gone south because of Washington’s support for Baghdad during and after the referendum. Iraqi Kurdish leaders reckon it's time to recalibrate.

Rojava provides a back door to Iraqi Kurdish relevance, not least because the United States relies heavily on the KDP-controlled Fish-Khabur border crossing to move weapons and other equipment to more than 2,000 special operations forces and their YPG-led Syrian Democratic Forces allies in northeastern Syria.

Ceng Sangic is the coordinator of the Kurdish Studies Program at the Moshe Dayan Center in Tel Aviv. He contended in an interview with Al-Monitor that the Iraqi Kurds’ “main focus is on rebuilding relations with Iraq” because the annual share of the Iraqi budget that the KRG has received — and periodically been denied — over the years is what helped build up its economy. However, since assuming the de facto leadership of the KRG after his uncle Massoud Barzani stepped down as president, Nechirvan Barzani has also sought to restore the “pre-2014 status quo for the KRG when it enjoyed good relations with Iraq, Iran, Turkey, the US, the PKK and the Syrian Kurds as well.”

Sagnic was referring to the period before the Islamic State overran much of Iraq, allowing the Iraqi Kurds to fill the vacuum and win control over territories that the central government and the KRG claim for its own, including Kirkuk. Nechirvan Barzani’s recent trip to Tehran is part of this rebalancing, which may also help spook Ankara and Washington into paying the Iraqi Kurds more attention again.

One very big concession made by the KRG to Tehran was to tell Iranian Kurdish militias to withdraw from scattered mountain posts along the Iran-Iraq border, from which they launch sporadic attacks against Iranian regime forces.

A prominent Kurdish-Iranian politician told Al-Monitor on condition that he not be identified that KRG officials had approached various Kurdish-Iranian groups based in Iraqi Kurdistan asking that they pull back from the Iranian border. He predicted that they would eventually all be forced to comply. The real function of the posts is to collect “taxes” from smugglers bringing liquor and other contraband into Iran. The PKK, which has a larger presence on the border, will be able to pocket all the revenue for itself.

Ranj Alaaldin is a visiting fellow at the Brookings Institution, Doha. He cautioned in emailed remarks to Al-Monitor, “Turkey runs the risk of unifying otherwise divided Kurdish groups, and the longer the current operation in Afrin continues, the more alienated Ankara becomes from the KDP and [its main rival] the Patriotic Union of Kurdistan, both of whom have historically cooperated with Turkey to combat the PKK.” Alaaldin continued, “That would enhance Iran’s standing with the KRG and weaken Ankara’s, but everything could quickly change if the Afrin operation and Turkey’s conflict with the PKK more generally spills over into Iraqi Kurdistan.”

Informed sources briefing Al-Monitor on strict condition of anonymity warned there is a real risk that Turkey will escalate its fight against the PKK in Iraqi Kurdistan. The sources said Turkey and Baghdad were discussing a possible Turkish operation to dislodge the PKK from Sinjar. The area serves as a bridgehead for PKK fighters traveling from their bases on the Iraq-Iran border to Syria. In exchange, Turkey would comply with Baghdad’s long-running demand to withdraw its troops from Bashiqa, near Mosul. The PKK is reportedly already bracing for just such an attack, digging tunnels and generally fortifying its defenses there.

The same sources said the United States also wants the PKK out of Sinjar and would likely share intelligence for a Turkish operation provided that Baghdad was on board. Washington sees it as a free way to ease tensions with Turkey over its continued alliance with the YPG. The sources speculated that the United States may also believe that disrupting the PKK's access to Rojava may weaken its hold over the YPG. Until recently, the KRG and above all the Barzanis would have wanted the PKK ejected as well because they were infuriated by the PKK’s growing influence in Sinjar, which they consider to be their own dominion.

But when Iraqi troops rolled into Sinjar in their post-referendum push, Iraqi Kurdish calculations changed, Wahab said. “KDP support for a Turkish operation against the PKK in Sinjar is no longer a given,” he said.