Iraq's prime minister met with Turkey's president in Ankara today to solidify joint support for Baghdad as it battles to keep the Kurdistan region under Iraqi control. 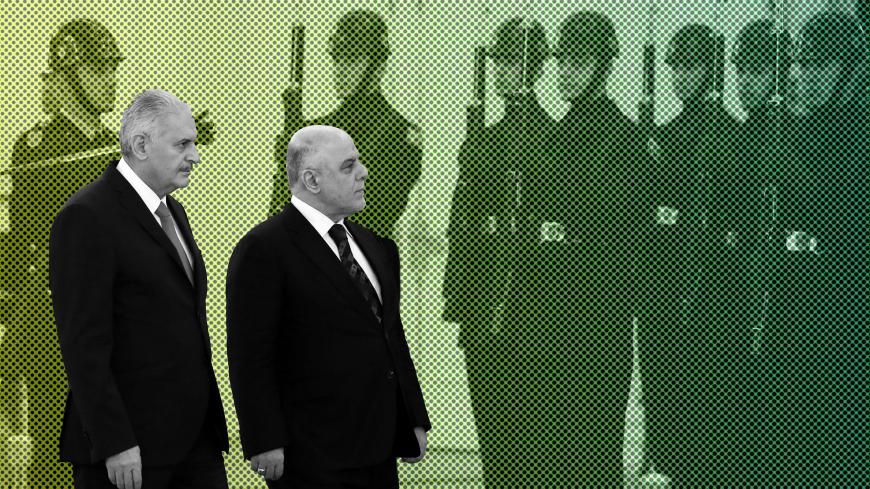 Iraqi Prime Minister Haider al-Abadi made a lightning visit to Ankara today to shore up regional support for Baghdad’s efforts to reclaim full control over the beleaguered Iraqi Kurdistan Region. The campaign could turn very bloody should the Kurds resist.

Abadi met with Turkish President Recep Tayyip Erdogan, who has emerged as a key ally in those plans. In a joint news conference, the two men repeated their objections to the Kurdish independence referendum, which was held Sept. 25 and approved by a crushing 93% of voters.

Erdogan said, “From the beginning we have always expressed that we supported territorial integrity in Iraq, and we will continue to do so.” He added, “We did not get a positive response to [our] warnings, so we decided to impose sanctions.”

Abadi said, “With the referendum, they tried to break up our territory. They tried to redefine our borders.”

Turkey has in fact not yet taken any real measures against the Kurdistan Regional Government (KRG) beyond holding showy military drills on its border, taking two Iraqi Kurdish news channels off the air and shutting its airspace to Kurdistan Region-bound flights — an empty gesture as Baghdad had already sealed that space to all international flights Sept. 29.

Turkey’s borders with the Iraqi Kurds remain open. A pipeline carrying Iraqi Kurdish crude to export terminals in Ceyhan, a Turkish port in the southern Mediterranean, is still functioning.

Turkey has left much of the initiative to Iran, the Kurds’ other big detractor. Tehran duly cut a deal with a faction of the Patriotic Union of Kurdistan (PUK), one of the two main parties governing the Kurdistan Region. Within two weeks, Iraqi forces backed by Shiite militias regained control of much of the territory Kurdish peshmerga fighters had captured from the Islamic State in 2014, most critically the oil-rich province of Kirkuk. Washington, which said it would remain neutral in the spat, has sat on its hands, effectively greenlighting Iraqi advances.

Iraqi forces are now keen to swoop on Fish-Khabur, a critical wedge of territory where the Iraqi, Turkish and Syrian borders meet.

It remains unclear whether Ankara would back further military action against the Kurds at its border, but Turkish officials have made no secret of their desire to see Baghdad reimpose federal authority over its border areas and has floated various plans.about this.

Erdogan said today that Turkey wanted to help Baghdad resume exporting Kirkuk's oil via an old dual pipeline that would take at least two years to refurbish, industry experts say. The plan would demand Kurdish acquiescence, and it's not been forthcoming. Baghdad may yet resort to force.

Indeed, until yesterday, an attack seemed imminent as Iraqi forces continued to advance north toward Iraqi Kurdish territory from Rabiya and Zumar. But the Iraqis are now holding their fire to allow time for a transfer of power that many think will take place within Iraqi Kurdistan. Ankara and Washington are said to favor this arrangement.

It is thought to be staked on the stepping down of Iraqi Kurdistan Region President Massoud Barzani, who would hand power to his nephew, Prime Minister Nechirvan Barzani. There is widespread speculation that this could happen in the coming days, if not hours.

The first signs of a climbdown emerged Tuesday, when the KRG declared that it was prepared to “freeze” the referendum and resume talks with Baghdad.

Under the proposed scheme, the new Kurdish leadership is meant to share control over its borders for the first time since 1991 and over oil revenues, another first since 2014, when the Kurds began exporting their oil independently of Baghdad through the Turkish pipeline and independence finally seemed within reach.

Many blame the fiercely proud elder Barzani for the current debacle. It has left the Iraqi Kurds deeply humiliated, further divided and in their weakest negotiating position since a failed autonomy deal with Baghdad in 1975.

In turn, Barzani has pinned responsibility on the PUK for selling out, as he sees it, to Iran. Others say it's Washington’s fault. The United States emboldened Iran and Baghdad in its zeal to stop the referendum. The wisest course of action, this argument goes, would have been for Washington, having registered its objections, to pipe down.

There is a face-saving way out for the president. Barzani’s term, which some members of the opposition say was extended illegally for a second time in 2015, will expire again Nov. 1. He has said on numerous occasions that he has no plans to stay on. Barzani could present his exit as his own choice.

But Iraqi Kurdistan would then be left without a president, as the Kurds’ regional parliament voted this week to delay by eight months parliamentary and presidential elections that were scheduled to be held concurrently on Nov 1. Further complicating matters, Iraqi Kurdistan does not have its own constitution, and the opposition Change Movement [Gorran] is continuing to boycott the chamber because of the dispute over the presidency.

Can Nechirvan save the day? Bilal Wahab is a Soref fellow at the Washington Institute for Near East Policy who writes about Kurdish governance. He told Al-Monitor, “Within [the Barzani-led Kurdistan Democratic Party] realm, Nechirvan would be a pragmatic actor because he is the least associated with the referendum.” The savvy prime minister kept a low profile throughout the referendum campaign and is widely believed to have urged his uncle to call it off. He negotiated many of the multibillion-dollar energy deals and is as much at ease with Washington and Moscow as he is with Ankara and Tehran.

Wahab cautioned, however, “While this formula may stave off the immediate crisis, the question of who represents the KRG in future negotiations with Baghdad will remain unresolved unless Gorran is brought on board. And this entails a whole new round of deal-making.” Other presidential hopefuls are known to be waiting in the wings. Then there’s the rarely mentioned yet widely known rivalry between Nechirvan and his cousin Masrour, the KRG’s powerful intelligence chief who is Massoud Barzani’s eldest son. How would this play out should Nechirvan be handed the reins? The Barzanis have rarely displayed disunity and least of all in public. But either way, Iraqi Kurdistan has entered uncharted waters.