What's next after Kurdish independence vote?

Millions in the Iraqi Kurdistan Region voted in today's independence referendum, despite threats by Iraq, Turkey, Iran and the United States. 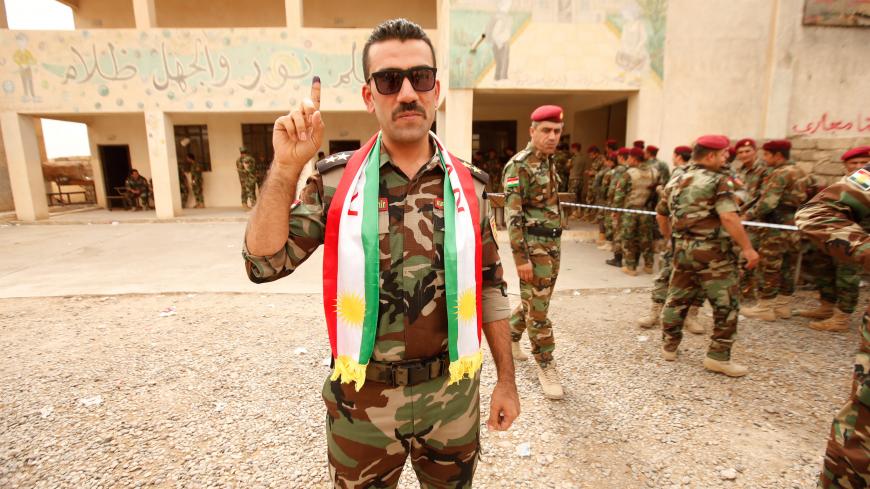 A member of the peshmerga forces shows his ink-stained finger during the Kurdish independence referendum in Sheikh Amir village, Iraq, Sept. 25, 2017. - REUTERS/Azad Lashkari

ERBIL — Defying pressure from the United States and regional powers Turkey and Iran, millions of Kurds cast their ballots today in a historic referendum on long-fought Kurdish independence.

Massoud Barzani, president of Iraqi Kurdistan, who is leading the independence drive, exuded confidence after voting at a polling station close to the presidential compound overlooking Erbil, where the Kurdistan Regional Government (KRG) sits. As election observers looked on, his eldest son, Masrour, chancellor of the Kurdistan Region Security Council, was up next, dipping his index finger in the indelible indigo ink meant to prevent repeat balloting.

At a polling station in Salahuddin, the mood was festive, with citizens taking selfies while lined up outside classrooms where ballots were being cast. “I am so happy,” said Shermin, a 20-year-old student who had come with her family to vote. “I want independence, right now.”

The jubilation expressed by the red, green and yellow Kurdish tricolor festooning streets, homes, cars and shopping malls was tinged with trepidation amid angry threats, thus far largely hollow, from Turkey and Iran. Both countries, which are home to large and restive Kurdish populations, have voiced stiff opposition to the referendum. Turkey deployed tanks along its border with the de facto Kurdish state, where Turkish units carried out drills. Turkish Prime Minister Binali Yildirim said Ankara views the results of the referendum as “null and void.” On Saturday, the Turkish parliament extended the mandate for Turkish troops stationed in Iraq and Syria by a year.

“After this, let's see … who they sell [their oil] to. The valve is with us. It's finished the moment we close it,” Erdogan said. “If there is a threat against us in Iraq and Syria, all options are on the table.”

Iran said it had canceled commercial flights to Iraqi Kurdistan and began shelling Iranian Kurdish fighters on the Iraqi Kurdish side of the border in Haj Omran. Qasem Soleimani, fabled head of the Islamic Revolutionary Guard Corps’ Quds Force, has been shuttling between Erbil and Sulaimaniyah, where Barzani’s rivals from the Patriotic Union of Kurdistan (PUK) and the Movement for Change (Gorran) reside over the past week in a bid to drive a wedge that would force a cancellation of the referendum. Yet after a period of wobbling, both the PUK and Gorran encouraged their supporters to vote.

Both parties see the referendum as a power grab by Barzani, whose grip has been weakened by a prolonged economic downturn triggered by the fall in global oil prices. In addition, Baghdad has been refusing to deliver to the Kurds’ their share of the national budget since it began selling oil independently. Meanwhile, rampant corruption has alienated ordinary Kurds, as they see their standard of living plunge.

Oil remains the main source of income for the cash-strapped quasi Kurdish state. Some 550,000 barrels per day are exported via a pipeline running to Turkish terminals on the Mediterranean Sea in defiance of Baghdad’s claims that the sales are illegal. If Turkey were to shut the spigot, the KRG would be on its knees. So far it has not, and revenues from oil sales continue to reach the KRG, allowing it to keep the economy running, at least for now.

In a further boost, Russian energy giant Rosneft signed a multibillion-dollar deal this month to produce and transport Iraqi Kurdish gas and oil. It seems highly improbable that the Russians would have proceeded without guarantees from Ankara for Rosneft to pump the oil and gas through and to Turkey, all part of a burgeoning Russian-Turkish alliance calculated to balance American influence in the region.

Indeed, the prevailing consensus among KRG leaders is that economic dividends will likely trump Turkey’s fears that an independent Kurdistan on its borders will inspire its own Kurds to break away. That would leave Iran loathe to be left holding the can, relinquishing Iraqi Kurdistan to Turkish economic and political influence. Iraqi Kurdish leaders reckon, therefore, that any Iranian sanctions will be more bark than bite.

Still, Erdogan’s comments suggest that the KRG may be underestimating the degree of Turkish anger. It may well be that Iran and Turkey both deem it imperative to nip Kurdish independence in the bud and act forcefully to do so.

Baghdad has threatened to take unspecified action to preserve Iraq's unity. Closing Iraqi airspace to flights headed to the Kurdistan Region's two main cities, Erbil and Sulaimaniyah, is said to be on the table.

Unusually, and unfortunately, for the Iraqi Kurds, their most critical military ally, the United States, has made common cause with Iran and Turkey in pushing Barzani to scotch the referendum as well. This is because of its potential effects on the political fortunes of its close ally, Iraqi Prime Minister Haider al-Abadi. Administration officials speaking to Al-Monitor on strict condition of anonymity aired worries that the referendum could even lead to the collapse of Abadi's government ahead of Iraq-wide parliamentary elections scheduled for April 2018. Barzani may well be calculating that the Kurds can only benefit from the ensuing chaos, allowing them to declare full independence.

While it seems unlikely that the Pentagon would freeze funding for Kurdish peshmerga battling the Islamic State (IS), some administration officials speculate that senior US officials will not be taking calls from the KRG leadership for a while. KRG spokesman Safeen Dizayee believes the United States’ arguments for a unified Iraq are full of holes. He told Al-Monitor in an interview, “The United States has lost 4,500 soldiers in Iraq, pumped hundreds of billions of dollars into it, and what emerged is a country immersed in sectarian violence. The only success story that can be promoted by the United States is that of the Kurds.”

Another worry is the oil-rich province of Kirkuk, which fell under Iraqi Kurdish control after Iraqi forces retreated before an IS onslaught in June 2014. Arabs and Turkmens also stake claims to the area, and the potential for conflict between peshmerga forces and Shiite-led militias is real. In a last-ditch attempt to halt the referendum, the United States reportedly asked Barzani to exclude the so-called disputed territories, notably Kirkuk, from the referendum. Some PUK leaders — including Hero Talabani, wife of the ailing PUK leader Jalal Talabani, and their son Pafel — appeared ready to accept this, but not Barzani.

His resolve and brinkmanship in the face of the barrage of international pressure to halt the referendum have elevated Barzani’s status among Kurds worldwide. Abdul Kader Hevidili, deputy commander of the Kurdish-led Syrian Democratic Forces, told Al-Monitor in a recent interview at his headquarters near Raqqa that the Syrian Kurds fully supported Barzani’s bid for full independence. A group of Kurdish fighters sitting around him nodded vigorously in agreement. “We respect Barzani for his resilience,” Hevidili said.

Dizayee said that the day after the referendum, the KRG will set about negotiating a smooth divorce from Baghdad. “We hope to discuss boundaries, sharing of natural resources, diplomatic representations abroad, all with a view toward full independence.” And what if Baghdad were to refuse? “We will cross that bridge when we get to it,” Dizayee said. The same holds true for all of the undeniably big challenges that lie ahead.