Kirkuk residents are fearful of the security and economic consequences of the Sept. 25 independence referendum as opposition to it persists. 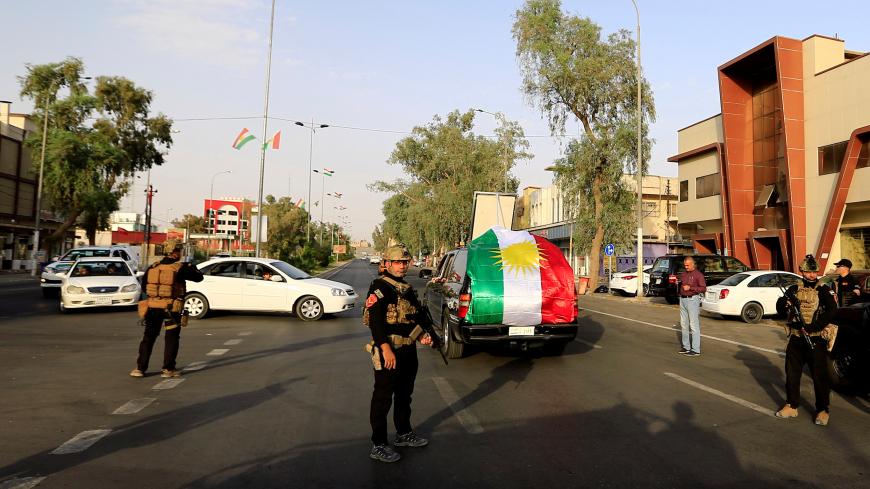 SULAIMANIYAH, Iraqi Kurdistan — In the days leading up to Iraqi Kurdistan's Sept. 25 independence referendum, a group of politicians in Kirkuk from the Patriotic Union of Kurdistan (PUK), which officially supported the referendum, opposed Kurdish nationalist fervor and questioned the wisdom of conducting the referendum in Kirkuk. They feared that holding the plebiscite there would damage the communal cohesion among the Kurdish, Arab and Turkmen communities. The dissidents were silenced the night before the vote, as excitement triumphed. The next day, Kirkuk residents cast ballots. With the government in Baghdad, along with Iran and Turkey, tightening the screws on the Kurdish leadership to forgo acting on the result of the balloting, internal Kurdish fissures have resurfaced in Kirkuk.

Mohammad Khezer, an Arab member of the Kirkuk provincial council, told Al-Monitor, “The Kurdistan referendum has caused three main challenges. [First is] a psychological one, which has created tension between different ethnic groups who used to live together peacefully. The second is related to the fight against Daesh [Islamic State], and we see that the peshmerga are not participating in the Hawija battle; and the third one is the fear that the opposition from the neighboring countries may cause the peshmerga, the Hashd [Popular Mobilization Units (PMU)] and the army to clash with each other in Kirkuk.” The Baghdad government amassed thousands of troops around Kirkuk as the army, backed by the predominantly Shiite militias of the PMU, advance on Hawija, the Islamic State's last stronghold in northern Iraq.

The threat of Iraq's division and regional repercussions have brought Prime Minister Haider al-Abadi closer to Turkish President Recep Tayyip Erdogan, who, because of a dispute over Turkish soldiers on Iraqi territory, last October had admonished the Iraqi premier to “know his place” and contemptuously told him, “You are not at my level.” Until this summer, when Iraqi Kurdistan's de facto president, Massoud Barzani, announced plans for the referendum, he and Erdogan had been considered the closest of allies. Times have changed.

While Baghdad and Tehran have imposed limited sanctions on the Iraqi Kurds — including a ban on international flights, fuel sanctions and banking restrictions — it is Erdogan’s threats to shut down the Kurdistan Regional Government's (KRG) main source of revenue — the oil pipeline from Kirkuk to Ceyhan in Turkey — that is sending shivers down the spine of Kurdish officials.

“The referendum crisis in northern Iraq is a new attempt to strike the heart of our region with a dagger,” Erdogan said on Oct. 3, speaking to his Justice and Development Party’s parliamentary group in Ankara. “We hope the northern Iraq administration comes to its senses soon.” He added, “Nobody can insult a nation who grew up with the songs of Kirkuk,” alluding to Kirkuk's symbolic importance for Turks, having been part of the Ottoman Empire and still home to a sizable Turkmen community that is considered part of the Turkish nation.

The divisions among Kurds in Kirkuk and the tremors from the referendum have unsettled many residents, who are mostly worried about the effect of the referendum on security and the economy. On the eve of the vote, a group of young Turkmens sat in a cafe in the predominantly Turkmen neighborhood of Musala, drinking sweet tea and playing dominos to the tune of Turkmen songs playing in the background.

“I swear, I have not sold anything for five days,” Murat, a shopkeeper who imports clothes from Turkey, told Al-Monitor. The young men said they would not take part in the referendum, but they were not opposed to it either. They were, however, concerned about the repercussions. Murat remarked, “I am worried about Baghdad cutting off the salaries of government employees, and then Kirkuk will suffer a financial crisis like Kurdistan, and people would have no money to spend.”

Hasan Turan, a prominent Turkmen member of the Iraqi parliament from Kirkuk, told Al-Monitor, “After September 25, Kirkuk has entered a perilous phase. We expect that Kirkuk will become the scene of disputes between the political forces in Baghdad and Erbil.”

Baghdad wants to reassert its authority over Kirkuk and has threatened to send the army into the province. On Sept. 14, at Abadi's request, the parliament in Baghdad ordered the removal of Kirkuk's governor, Najmaddin Karim, after it was announced that the province would take part in the referendum. With the city brimming with tension among the Kurds themselves, the PUK dissenters, in concert with Baghdad, are again challenging the main PUK faction as well as Barzani’s allies in Kirkuk by pressing for the governor's removal.

The two officials in charge of the PUK, Kosrat Rasul, a veteran peshmerga commander, and Hero Ibrahim Ahmad, the late Jalal Talabani’s wife, are under extreme pressure from their close ally Iran, which had opposed the referendum. Iran has supported the PUK for decades, and Qasem Soleimani, the powerful commander of the Islamic Revolutionary Guard Corps' Quds Force, made several trips to Sulaimaniyah to try to convince the PUK not to back the referendum, but to no avail.

In a statement published by PUK Kurdsat on the night of Oct. 2, Ahmad appeared to have come to the conclusion that the Kurdish leadership, including herself, had made a mistake in “defying” the world, and now they were paying the price, being cornered by their neighbors for their “obstinacy” in proceeding with the controversial referendum. Rasul and Ahmad are also now worried about how well the PUK will perform in Kurdistan parliamentary elections scheduled for early November.

Also on the night of Oct. 2, Barham Salih, a former prime minister of Kurdistan who has cordial relations with Iran, Turkey and the United States, launched a fierce attack against the ruling parties in Erbil and Baghdad. Salih, fed up with the factional politics within the PUK, has put together a coalition to contest the election in November but has not officially left the PUK.

Salih is also pursuing a national dialogue in Baghdad. “Fourteen years after toppling Saddam, the time has come to review this abnormal situation; the time has come for a fundamental solution to the foundational problems of the Iraqi political system,” Salih asserted in a video statement. “This country cannot continue to be plagued by its national and regional rivalries; it is vital that the representatives of all the groups start a frank dialogue in Baghdad.” Salih further complained that politicians have created an environment in Iraq and the Kurdish region that does not take into account the wishes of the people, who have no trust in the political system.

No one appears to know how the crisis over the Kurdistan referendum will end, but whatever happens, the people of Kirkuk will be at the forefront of events and tensions. “The language of dialogue has been lost in Kirkuk, and it is vital that, with open-mindedness, we find the language of negotiation again,” said Turan. “We are not against Kurds. We are against the Kurdish policy that plays with the future of Kirkuk and could bring misery to the city.”

by Ismail BELLAOUALI with Philippe AGRET in Rabat and Marie GIFFARD in Madrid | AFP | Jun 24, 2022
END_OF_DOCUMENT_TOKEN_TO_BE_REPLACED