Can Putin stop Erdogan from shutting down Iraqi Kurdish pipeline? 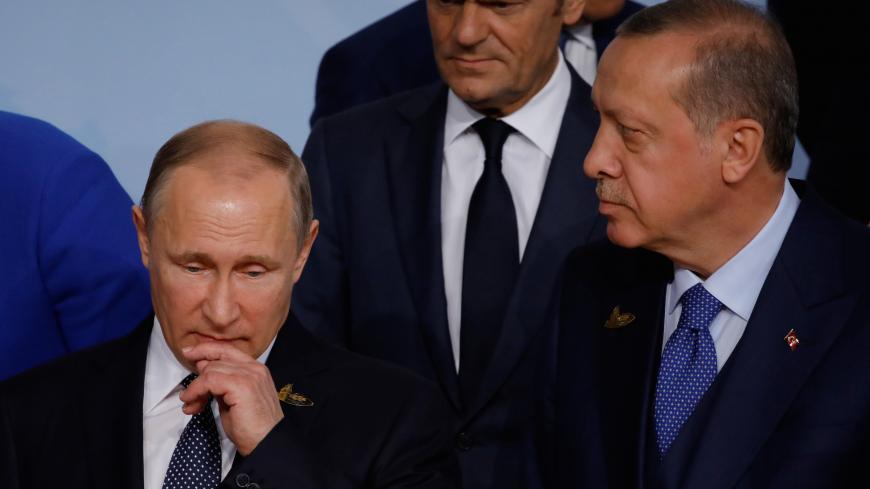 Turkey, Iran and Iraq are deepening their coordination over the next steps in Iraqi Kurdistan, including decisions on whether to shut down Iraqi Kurdish oil exports via Turkey or to back the Iraqi government in taking control of Kirkuk.

Briefing reporters after a one-day trip to Iran on Oct. 5, Turkish President Recep Tayyip Erdogan said, “If a decision is made on closing oil taps in the region, it will be made by us. Turkey, Iran and Iraq’s central government will do so together,” Amberin Zaman reported.

Zaman added that “Erdogan’s comments about the pipeline appeared to be mainly in response to remarks by Russian President Vladimir Putin. The Russian leader declared at an energy forum in Moscow yesterday [Oct. 4] that Russia was following a policy of ‘non-interference’ in Iraqi Kurdistan and that it is not in anyone’s interest to halt the Kurdistan Region’s oil exports.”

As we wrote in this column last week, Putin is boxed in in his attempt to protect Rosneft’s investment in Iraqi Kurdistan, as initiative on the matter has gravitated to Turkey and, more importantly, Iran, acting together and with the Iraqi government. “There is no Russian military muscle to flex in Iraq,” we wrote, "as it has in Syria, especially compared with the assets of Turkey and Iran” in Iraq.

The implications of the shifts in regional alignments in opposition to the Kurdish independence referendum may be even more expansive, offering Iran greater diplomatic leverage and options. Turkey’s Chief of General Staff Hulusi Akar had been in Iran a full three days for military consultations prior to Erdogan’s arrival. Hamidreza Azizi wrote that as “both Tehran and Ankara are talking about intensifying their collaboration with Baghdad in a trilateral manner, the continuation of the current situation could lead to the formation of a new Tehran-Baghdad-Ankara axis in the long run. If realized, the new bloc could also involve Qatar, as Iran and Turkey have appeared as Doha’s two main partners since Qatar's recent diplomatic spat with the other Gulf Cooperation Council countries. This would reshape the regional power equations in the Middle East. Although the last scenario appears unlikely, it’s not a possibility to completely ignore while thinking about the wider arc of Iran-Turkey relations.”

Ali Hashem reported, “When it comes to countering the results of the Kurdish referendum, neither Iran nor Turkey will act on their own; rather, both will move together. … A source close to the IRGC [Islamic Revolutionary Guard Corps] told Al-Monitor on condition of anonymity that the Kurdish referendum dilemma could be the challenge that will induce Turkey, Iran, Iraq and some other allies to actually cooperate on the ground. ‘For years, these parties were facing each other in Syria, directly or indirectly. The challenge of the Kurdish referendum is being transformed into a serious opportunity.’ Information acquired by Al-Monitor indicates that the first step could start from Kirkuk, given its status with respect to Iraq, and the fact that the KRG’s [Kurdistan Regional Government's] occupation of the area was seen as illegitimate by the Iraqi authorities and the international community.”

The inclusion of oil-rich and ethnically mixed Kirkuk in the referendum has been kindling for a brush fire in Kurdish, Iraqi and regional politics. Erdogan said the Iraqi Kurds were invaders in the Kirkuk region, which includes sizable Turkmen and Arab communities. Fazel Hawramy wrote, “In the days leading up to Iraqi Kurdistan's Sept. 25 independence referendum, a group of politicians in Kirkuk from the Patriotic Union of Kurdistan (PUK), which officially supported the referendum, opposed Kurdish nationalist fervor and questioned the wisdom of conducting the referendum in Kirkuk. They feared that holding the plebiscite there would damage the communal cohesion among the Kurdish, Arab and Turkmen communities. The dissidents were silenced the night before the vote, as excitement triumphed. … The two officials in charge of the PUK, Kosrat Rasul, a veteran peshmerga commander, and Hero Ibrahim Ahmad, the late Jalal Talabani’s wife, are under extreme pressure from their close ally Iran, which had opposed the referendum. Iran has supported the PUK for decades, and Qasem Soleimani, the powerful commander of the Islamic Revolutionary Guard Corps' Quds Force, made several trips to Sulaimaniyah to try to convince the PUK not to back the referendum, but to no avail.”

“In a statement published by PUK Kurdsat on the night of Oct. 2,” Hawramy added, “Ahmad appeared to have come to the conclusion that the Kurdish leadership, including herself, had made a mistake in 'defying' the world, and now they were paying the price, being cornered by their neighbors for their 'obstinacy' in proceeding with the controversial referendum. Rasul and Ahmad are also now worried about how well the PUK will perform in Kurdistan parliamentary elections scheduled for early November.”

Ali Mamouri noted that Iraqi Prime Minister Haider al-Abadi’s executive orders against the region, including halting all international flights and ordering KRG authorities to transfer responsibilities for border posts and airports to the central government, received qualified support from some opposition Kurdish groups in the Iraqi parliament who questioned its timing. Abadi has so far dismissed entreaties from Grand Ayatollah Ali al-Sistani and former Iraqi Prime Minister Ayad Allawi to solve the present crisis through dialogue and in deference to the Iraqi Constitution. Last week, we speculated that Tehran might be willing to “commit its Popular Mobilization Units to back Iraqi Prime Minister Haider al-Abadi if he decides to deploy forces to Kirkuk. Such a move by Abadi would be popular among Arab Iraqis and likely stave off the political challenge of former Prime Minister Nouri al-Maliki.”

Putin sought to find some diplomatic maneuvering room during King Salman bin Abdul-Aziz Al Saud’s visit to Moscow last week, but there is little the king can do facilitate an exit ramp for Putin’s troubles in Iraq. And Putin cannot jeopardize his relations with Iran to win the king’s favor, given Russia’s and Iran’s interests in Syria. “The Saudis' concerns about Iran's regional meddling and support for Shiite militias such as the Houthis and Hezbollah will find little resonance in Russia,” Bruce Riedel wrote. "Tehran enjoys fairly good relations with Moscow and the two cooperate closely, leaving Riyadh without leverage. In Iraq, the king has engaged this year in new and innovative ways and can also look for methods to cooperate with Russia; nevertheless, Iran retains the upper hand in Baghdad.”

Putin is therefore stuck, for now, counting on both his own powers of persuasion with his counterparts in Turkey and Iran, and on the wiles of Iraqi Kurdish President Massoud Barzani. Zaman wrote, “There are no signs that the steely septuagenarian [Barzani] will budge. If anything, Turkey’s shrill reaction is helping shatter the Iraqi Kurdish opposition’s narrative that Barzani is a Turkish pawn and boosting his street cred among Kurds across the globe. At the same time, it is denting Erdogan’s popularity among his own Kurdish constituents, which may explain why he has softened his tone if not his message to the KRG. Barzani, for his part, is betting that when push comes to shove, his foes lack the stomach to act on their threats and that the best course of action is to stick to his guns and wait for the clamor around the referendum to die down. As ever, the biggest challenge remains the divisions among the Iraqi Kurds themselves.”

As we concluded last week, "Putin has much at risk, but is not without options, in contemplating his next moves. If he misplays his hand in northern Iraq by banking on a weakened Barzani, he may end up finding himself exposed and on defense in both Syria and Iraq and at odds with Iran and Turkey — the worst of all worlds. Or he can tactfully shift toward the Iran-Turkey alignment, which is gaining traction and strength, quietly distancing himself from dependence on Barzani while opening discussions with Baghdad to pursue Russia’s energy interests in northern Iraq.”

Cengiz Candar, a longtime friend of former Iraqi President Jalal Talabani, who died last week, wrote, “To understand the huge vacuum that Talabani left in the already turbulent and scarred Middle East, Iran's Foreign Minister Mohammad Javad Zarif's words must be considered. Zarif saw ‘an irreparable tragedy for both Iran and Iraq’ in Talabani's death. Along similar lines, the Iranian Kurdish organization Komala, the archenemy of Iran's Islamic regime, described Talabani as ‘one of Kurdistan's absolutely finest and greatest.’"

“It is interesting to see that instead of Talabani's ‘Kurdishness’ to which he had devoted his life, his ‘Iraqiness’ was exaggeratedly emphasized by Western officials,” Candar wrote. For instance, UK Minister of State for the Middle East Alistair Burt called him ‘a respected statesman who served Iraq with distinction.’”

Talabani was also known as Mam Jalal. “Without a doubt, Talabani's own party, the PUK, will most directly feel the impact of his death. The movement had weakened when Talabani's deputy, Nawshirwan Mustafa, had left the PUK and founded Gorran (Movement for Change) in 2009. The PUK became crippled and riddled with acute factional infighting after Mam Jalal's health declined in 2012. Barham Salih, one of Mam Jalal's deputies, recently left the PUK to form his own political entity and participate in the upcoming Kurdish elections on Nov. 1. After Mam Jalal's death, it will be even more difficult to maintain the unity of his movement and overcome the differences among its many leading personalities and factions.”

“Mam Jalal was not only a larger-than-life figure, but he was a Kurd larger than Kurdistan itself,” Candar concluded. “The Middle East, along with Kurdistan and Iraq, will become even more dangerous without him.”

Al-Monitor and Washington Editor Julian Pecquet have won the explanatory reporting prize from the prestigious Online Journalism Awards for the series "Middle East Lobbying: The Influence Game." The Online Journalism Awards are the only comprehensive set of journalism prizes honoring excellence in digital journalism. The Al-Monitor lobbying series, now in its third year, has become a must-read among experts, journalists, and executive and congressional staff seeking to understand the influence game involving Middle Eastern governments and their lobbyists.