What Talabani's death means for future of Iraq

The future doesn't look well for Iraq and the region in the wake of former President Jalal Talabani's death. 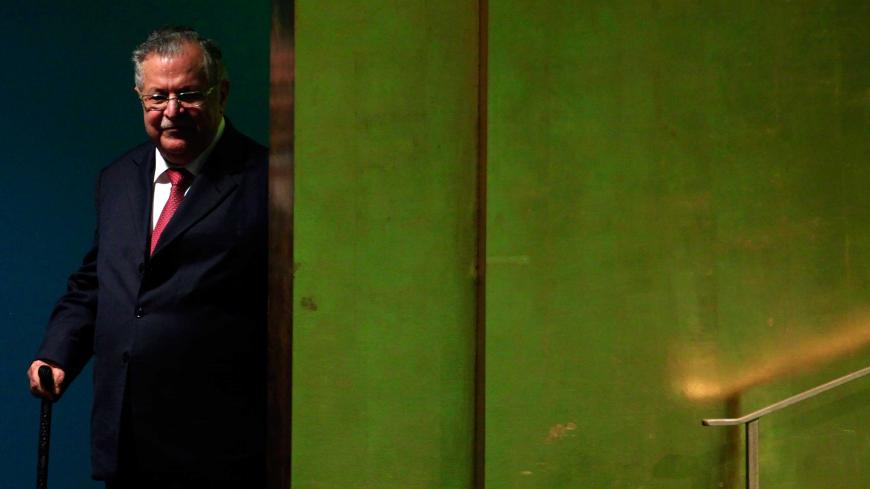 Probably no president was ever called "uncle" by his eminent counterparts and by the people on the street. Yet in every Middle East country where Kurds live, "mam" ("paternal uncle" in Kurdish) was the honorific title of Jalal Talabani, a legend of Kurdish politics and former president of Iraq from 2005 to 2014.

When they use honorific titles, Kurdish men are usually addressed as "kak," which translates to "sir." For example, his followers and Kurds in general often address Massoud Barzani, the president of the Kurdistan Regional Government (KRG) of Iraq, as "Kak Massoud." Such a title of respect never suited Jalal Talabani. "Mam," however, was a sign of affection. I do not recall any time that I have addressed him in any other way in the more than 40 years we knew each other.

Talabani, Iraq's first non-Arab president after Saddam Hussein, died Oct. 3 at a time when his lifetime goal for an independent Kurdistan triggered intraregional tensions that only his savvy leadership could moderate.

Talabani became incapacitated after he suffered a stroke in December 2012; he underwent treatment in Berlin for more than a year. Since then, he has had no apparent political role in Kurdish and overall Iraqi decision-making. Yet, despite his absence in the political scene for almost five years due to his frail health, unable to speak and move, his physical presence on this earth seemingly provided a bizarre sense of confidence to all those locked in intense political struggles with each other.

Financial Times called Talabani "a giant of Iraqi Kurdish history" and "a pragmatic and important binding force," and underlined his paradoxical life as a man of reconciliation and moderation who spent many years in the mountains as a legendary Kurdish fighter opposing Iraq's Arab nationalist regimes. With his death, Talabani generated an aura of respect among a wide range of international personalities representing diverse and even hostile interests.

Talabani's erstwhile political rival and friend Barzani said, "I myself lost a friend, brother and a strong supporter." Meanwhile, Iraq's Prime Minister Haider al-Abadi, Barzani's new nemesis in the aftermath of the Sept. 25 independence referendum in Iraqi Kurdistan, also expressed his sadness. Abadi described Talabani as a "faithful partner" in the new Iraq, which signaled a tacit criticism directed at Barzani. The Iraqi prime minister added, "In these sensitive times we're more than ever in need of his moderation, wisdom and insistence on the unity of Iraq and Arab-Kurdish brotherhood in a united Iraq. We'll always remember his definition of the people of Iraq as a wreath of flowers of different varieties."

For the US State Department, Talabani was "a true statesman and a leader for all Iraqis." UK Ambassador to Iraq Frank Baker praised Talabani on Twitter as a "huge political figure in Iraq's history." Baker said Talabani showed "wisdom and compassion throughout his life."

It is interesting to see that instead of Talabani's "Kurdishness" to which he had devoted his life, his "Iraqiness" was exaggeratedly emphasized by Western officials. For instance, UK Minister of State for the Middle East Alistair Burt called him "a respected statesman who served Iraq with distinction."

To understand the huge vacuum that Talabani left in the already turbulent and scarred Middle East, Iran's Foreign Minister Mohammad Javad Zarif's words must be considered. Zarif saw "an irreparable tragedy for both Iran and Iraq" in Talabani's death. Along similar lines, the Iranian Kurdish organization Komala, the archenemy of Iran's Islamic regime, described Talabani as "one of Kurdistan's absolutely finest and greatest."

As a close friend of "Mam Jalal" since 1973 and as someone who played a joint role with him in establishing Turkey's relationship with the Kurdish political movement for the first time since the foundation of the Republic of Turkey, I know very well that he identified himself with the city of Kirkuk — Talabani was a Kirkuki above anything else. The words of Dr. Najmaldin Karim, the governor of Kirkuk and personal physician of Talabani, are to the point: "The world, Iraq, the people of Kurdistan and Kirkuk today lost one of the most prominent leaders of the liberation [movement] … a most eminent advocate of human rights." Karim, who is also a fellow member of the Patriotic Union of Kurdistan (PUK) that Talabani had founded and led, added, "We in the city of Kirkuk are more saddened than anyone else by the loss of President Mam Jalal because he loved our city and was defending the Turkmens, Kurds, Arabs, Chaldeans and Assyrians."

Such a gigantic personality was Mam Jalal. Although he was not actively involved in politics since his 2012 stroke, the knowledge that he was alive served as an invisible safety valve to prevent things from completely getting out of control in Iraq, Kurdistan and the region.

Talabani's political absence since December 2012 already created a huge gap. His demise would be felt even more strongly in resolving the seemingly insurmountable conflicts engulfing the Middle East.

Without a doubt, Talabani's own party, the PUK, will most directly feel the impact of his death. The movement had weakened when Talabani's deputy, Nawshirwan Mustafa, had left the PUK and founded Gorran (Movement for Change) in 2009. The PUK became crippled and riddled with acute factional infighting after Mam Jalal's health declined in 2012. Barham Salih, one of Mam Jalal's deputies, recently left the PUK to form his own political entity and participate in the upcoming Kurdish elections on Nov. 1. After Mam Jalal's death, it will be even more difficult to maintain the unity of his movement and overcome the differences among its many leading personalities and factions.

Talabani’s death will also help to strengthen Barzani, at least for the foreseeable future. Without Talabani on the political stage and with the leaders of Turkey's Kurdish movement — from Abdullah Ocalan to Selahattin Demirtas — behind bars, Barzani is likely to emerge as the only Kurdish leader with national stature and international reputation.

That comes with a price: In the absence of Kurdish checks and balances, Barzani's aspirations could only be checked by a number of regional and international players. Until now, these players contributed to the further destabilization of the Middle East. As a man who could build bridges, reach compromise and operate and establish balance, Talabani's absence would be felt more than ever.

Mam Jalal was not only a larger-than-life figure, but he was a Kurd larger than Kurdistan itself. The Middle East, along with Kurdistan and Iraq, will become even more dangerous without him.