The upcoming meeting of the Patriotic Union of Kurdistan in January 2014 may be an opportunity to elect new leadership. 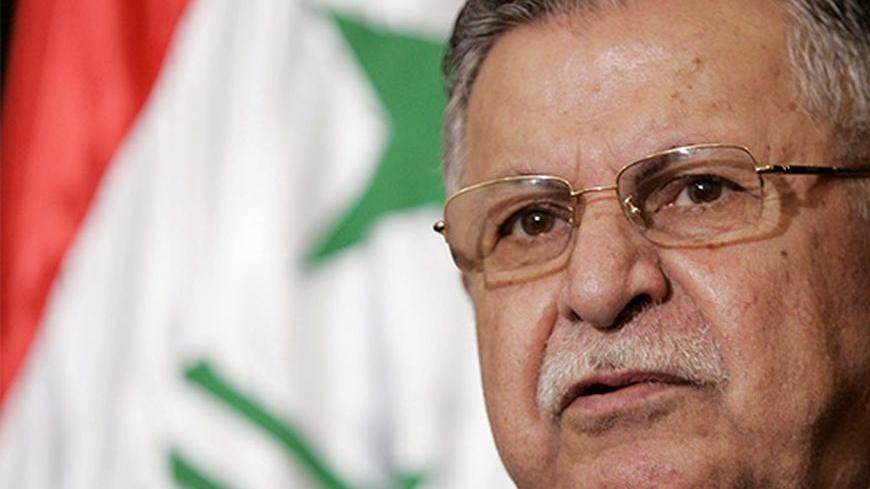 ERBIL, Iraqi Kurdistan — The political party of Iraqi President Jalal Talabani, who is recovering from a December 2012 stroke, is facing internal problems and challenges after the party’s poor showing in the Sept. 21 parliamentary elections of the Kurdistan Regional Government (KRG), when it fell to the third place. The loss caused a power vacuum inside the Patriotic Union of Kurdistan (PUK).

The PUK won 18 seats, while the ruling Kurdistan Democratic Party (KDP) won 38 seats, and the PUK offshoot Gorran ("Change") Party won 24, including a majority in Sulaimaniyah, a longtime PUK stronghold.

“This is the third election; the PUK lost,” said Yusuf Muhammed Sadiq, who lead the opposition’s electoral list.

On Oct. 10, the party held its fifth plenum and is reportedly planning for another conference on Jan. 31, 2014, when it is possible new leaders will be chosen. In the plenum, its members criticized the PUK leadership for failing to win votes.

On Sept. 30, Hero Ibrahim Talabani, the president’s wife, resigned from her post as leader of the PUK branch in Sulaimaniyah after facing criticism in meetings. She was quoted by PUKmedia, the party’s official site, as saying, "Unfortunately, after I failed to win the approval of most of you, I decided to return to the political bureau and leave the post of the party center in Sulaimaniyah to others."

Barham Salih, one of the most popular PUK politicians, said, “The real judgment will take place in the next congress of the party.” PUKmedia reported that Salih indirectly criticized PUK officials that caused the party's electoral defeat in Sulaimaniyah.

The PUK has been suffering from the rise of the new opposition party Gorran, which won 25 seats in the 2009 parliamentary elections. Although the PUK performed better in the January 2010 Iraqi parliamentary elections due to its strong support in the city of Kirkuk (which is not officially included in the Kurdistan Region), it did not manage to recover due to Talabani’s sudden stroke.

After that, the PUK has been left leaderless, and many people believe Talabani won’t be able to return, as he has not fully recovered from this stroke. Diplomatic sources claim that even some PUK members were thinking of splitting from the PUK before the elections.

The Gorran list is mostly a grassroots reaction within the PUK against its strategic agreement with the KDP, led by KRG President Massoud Barzani, to divide the government posts.

Many in the PUK dislike Barzani dating to when the two parties fought after the Kurds won de facto autonomy after 1991, when the Western powers imposed a no-fly zone over the Kurdistan Region. Some left the party due to the lack of reform and allegations of corruption among the leadership.

“People inside the PUK criticized the leadership for closely aligning with the KDP, and there is a strong opinion in the rank and file of the PUK that this is why they lost the election. But what the leadership of the PUK will do, I don’t know,” said Muhammed Tofiq, the head of Gorran’s foreign relations, formerly of the PUK.

PUK Leadership Committee member Ala Talabani told the Kurdish magazine Livin that his party has suffered losses for not implementing the strategic Dabashan Agreement with the Gorran Movement in September 2012 to send the Kurdistan Region’s draft constitution to the parliament and to change the ruling system to a parliamentary one. Instead, members of the PUK leadership decided to support the extension of Barzani’s presidency for two years on June 30.

Adel Murad, the general secretary of the PUK’s central council, says he was surprised to see PUK members voting for Gorran when he went to the polling station with his wife.

“They said, 'Mr. Adel Murad, we will vote for Gorran because the PUK moved to the wrong side [the KDP].'” He called the extension a "bullet of mercy."

According to Murad, the only way the PUK can save itself is by a change of leadership and bringing in a new generation. He told Al-Monitor, “We are in a big crisis; the absence of Talabani is a very big problem.”

Murad thinks the entire PUK leadership must be changed, and said, “Most of them are corrupt; others cannot continue. The urgent thing is to change some corrupt people — these people make a lot of problems for the PUK.”

“[Qubad Talabani] is not involved in corruption, which is very important," he said. "The new generation is a big problem in the PUK because the PUK didn’t give them the chance for the new leadership.”

Adel Murad agrees, saying, “There are some people in our PUK who are saying, 'We don’t need Gorran; let’s do a coalition only with the KDP.' I think this would be the death of the PUK. Why? Because Gorran used to be a part of our party.”

Senior PUK leader Mullah Bakthiar told Asharq Al-Awsat that the Gorran list had approached the PUK to form a government without the KDP, but that the party rejected the idea.

But Adel Murad also says that a government cannot be formed without the KDP, the winner of the last elections. He said, “Then the border of this government will end at Degela [the border of Sulaimaniyah and Erbil]." He says a majority government including all the parties is the only solution; otherwise, the government would be destroyed.

“There are four directions in the PUK," said Amanj Abdullah, from Gorran in Erbil, referring to Hero Talabani, Kosrat Rasul, Mala Bakthiar and Barham Salih. He suggested the PUK is facing an existential challenge. "It is very difficult for them to join the government or not. It’s like the Iraqi Communist party in the late 1950s, which dominated political life in Iraq. Now they cannot win one seat.”

It is clear that the PUK will face challenges in the future. The next party conference on Jan. 31, 2014, will show if the PUK is able to make reforms, or whether the leadership will remain the same. The PUK will have to make a tough choice for the formation of the government.