Kirkuk teetering on brink of war

The planned Kurdish referendum has divided the main ruling Kurdish party in the oil-rich city of Kirkuk, raising tension in the city and threatening to undermine the delicate and fragile cohesion that exists in the multi-ethnic city. 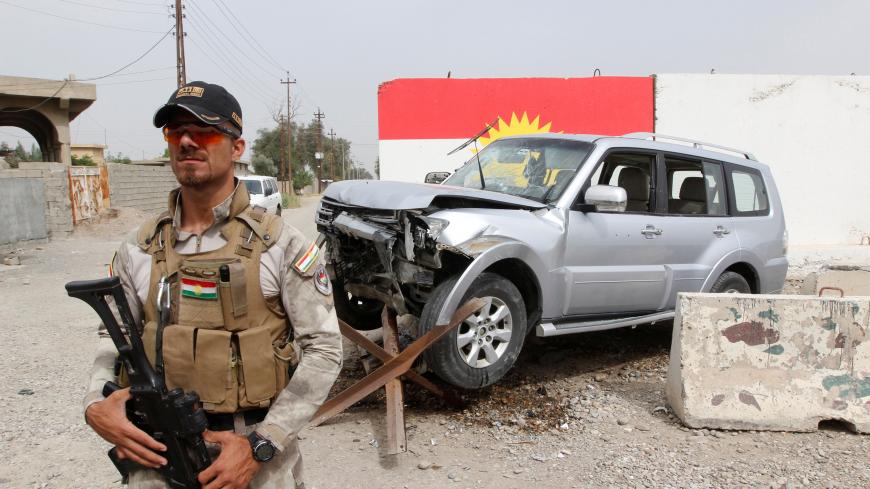 A member of the Iraqi Kurdish security forces stands guard next to the car of Mohammed Younis, a senior official of Iraq's state-run North Gas Company who was killed by gunmen, in the northern oil city of Kirkuk, Iraq, May 2, 2017. - REUTERS/Ako Rasheed

A few days ahead of the Kurdistan referendum on independence, an ethnic clash took place between a group of Kurds and Turkmens in Kirkuk on Sept. 19. Local police deployed in different parts of the city to prevent the development of the deadly clash.

The Patriotic Union of Kurdistan (PUK) rules Kirkuk city through grassroots organizing committees in every neighborhood, including in Turkmen and Arab communities, the origins of which date back to the 1970s, when the PUK began fighting the Baathist regime of President Saddam Hussein. Out of Kirkuk governorate's 13 seats in the national parliament in Baghdad, the PUK has six. Nothing can be done in Kirkuk without the approval of the Malband, the PUK office that oversees the work of the grassroots organizing committees.

The PUK is notoriously fractured, however, and this is reflected in the party's position on the upcoming referendum. Sensing the potential for unrest and trying to address the concerns of Arab and Turkmen communities, Malband members voted Sept. 14 to exclude Kirkuk governorate residents from voting in the referendum.

“We decided to reject holding the referendum in Kirkuk … because the future of the city is in danger and we are not ready to gamble on the city.” Yasin Izzadin, a Malband deputy, was quoted as saying.

“When they decided to hold the referendum, why did they not come and consult with the political parties in Kirkuk?” asked Rawand Mala Mahmoud, another Malband deputy, on a local TV channel Sept. 18. He added, “No one asked us if having the referendum in Kirkuk will be a good idea. … What would you say to your people if the referendum is not approved?"

The pro-referendum camp tried to offset the influence of the organizing committees on Sept. 19, when Iraqi Kurdistan President Massoud Barzani traveled to Kirkuk, accompanied by veteran peshmerga commander Kosrat Rasul, who is officially in charge of the PUK following Talabani's illness. Rasul tried to end the bickering and ordered the members of the Malband to support the referendum. Most Malband members did not attend a pro-referendum rally afterward and did not initiate campaigning for the referendum, sources informed about the dispute told Al-Monitor. Most members continue to think holding the referendum in Kirkuk province is unwise.

Kirkuk is currently the PUK's main power base, with its control over Sulaimaniyah under increasing pressure from Goran, the Change Movement, the reform-based party that split from the PUK in 2009.

Shorsh Khalid is the managing editor of Kirkuknow, a web-based news outlet covering the disputed territories in Kirkuk, Diyala, Salahuddin and Ninevah provinces. “I think this was one of the best decisions Malband has made. … They are in the heart of the situation and know the threats of holding the referendum,” Khalid, a native of Kirkuk, told Al-Monitor. “I think the decision to hold the referendum in the disputed areas is like a declaration of war, as Hashid Shaabi [Popular Mobilization Units (PMU)] — most of whom are Arabs and Turkmens — said it should not be held in their latest statement.”

Other opposing parties in the area include Iraqi PMU militias affiliated with Iran, who have a strong presence in Shiite areas in the south of Kirkuk and in the Tuz Khormato area in Salahuddin province. Moreover, the Baghdad government, which opposes the referendum, has recently deployed thousands of troops to the area with the launch of the Sept. 21 offensive to retake Hawija and other areas west of Kirkuk from the Islamic State (IS).

When Iraqi soldiers fled for their lives in June 2014 with the IS blitzkrieg into northern Iraq, Kirkuk fell under KRG control with thousands of peshmerga stationed in and around it.

The position of the PUK organizing committees is in unison with the Arab and with the Turkmen groups in the city, which have also rejected the referendum, asserting that the Kurdish plebiscite could increase tension that could spiral out of control. Already in one incident, on Sept. 19, a run-in between a group of pro-referendum Kurds and guards outside a Turkmen political organization left one Kurd dead and three other people wounded. Kurdish security forces moved quickly to contain the damage and stop revenge attacks.

At the heart of the tensions in Kirkuk are the Arabization policies of successive Iraqi regimes since the 1960s, when thousands of Kurds and to a lesser extent Turkmens were driven from their lands and replaced by Arabs from other parts of Iraq. Article 140 of the 2005 Iraqi Constitution called for addressing this issue — and by whom the people of Kirkuk want to be governed — by late 2007, but this did not and has not happened.

“Kirkuk is like a barrel of gunpowder, and a single wooden match could change everything,” said Khalid. “The people of Kirkuk from all backgrounds have firearms at home and some carry them around like prayer beads.”

The tensions in Kirkuk have regional dimensions as well. Turkey is concerned about Kirkuk, because of its sizable Turkmen community. One Turkish politician is calling on the government to take military measures against the Kurds if they proceed with the plebiscite.

On Sept. 20, Kurdistan Regional Government Prime Minister Nechirvan Barzani, while insisting that the people of Kirkuk should decide their future, warned against any military intervention. “I don’t see any military threats on the Kurdistan Region. … Turkey and Iran are free to do whatever they do in their own countries. … It is true that we are a regional government, but our hands are not tied to the extent that we are not able to do anything if they use military force,” Barzani said.