For a third day, thousands of angry protesters turned out in Sulaimaniyah in Iraqi Kurdistan and clashed with security forces as the KRG faces a governing crisis. 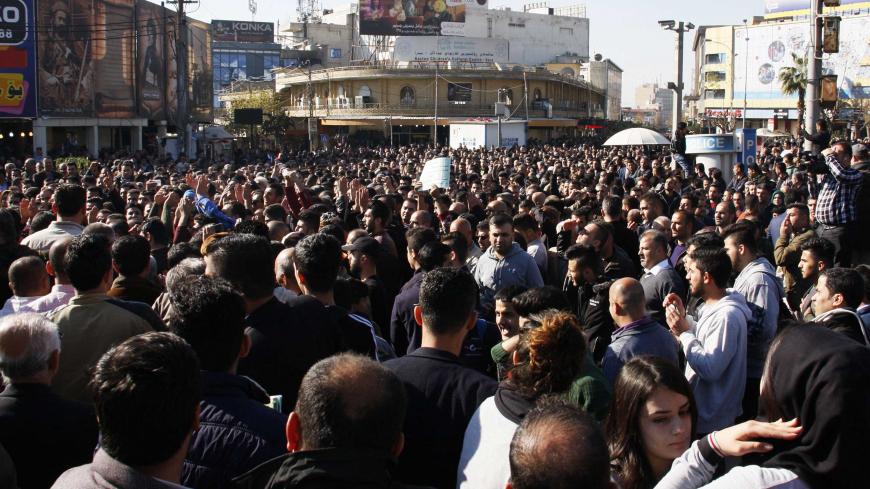 SULAIMANIYAH, Iraq — The Kurdistan region of Iraq is fast descending into chaos, with protests continuing for the third day in some parts of Sulaimaniyah province and security forces using live ammunition to disperse them. Meanwhile, Iraqi Prime Minister Haider al-Abadi has threatened to intervene militarily.

Thousands of angry protesters including students, teachers and government employees across the province called for the resignation of the entire Kurdistan Regional Government (KRG) and the main two ruling parties for not being able to run the semi-autonomous region effectively.

“Some of the protesters fought the security forces,” a local journalist from the town of Raniya told Al-Monitor Dec. 19 on condition of anonymity for fear of reprisal. “Six people were killed, but the protesters are in charge of the city tonight.”

The KRG has been unable to pay the salaries of its civil servants for over two months following the ill-fated referendum for independence in September that brought on crippling punitive measures from Baghdad, Iran and Turkey.

In Sulaimaniyah city, for the second day, the police, the peshmerga and the security force known as Asayish internal police battled protesters with tear gas and water cannons in the main bazaar. Around a dozen people were wounded, and Al-Monitor observed a man being punched in the face by a member of the Asayish.

In a worrying development Dec. 19 that could have serious consequences for the region’s stability, the Patriotic Union of Kurdistan (PUK), which controls Sulaimaniyah province, appeared to call on vigilantes to maintain order and “support the democratic and patriotic path of their party” against "troublemakers." The party shared a warning with the press. “It is not acceptable for some … media outlets to provoke protesters to cause trouble in the name of freedom of press. … These channels and their backers … are responsible for the blood of those who become victims.”

Hours before the PUK statement was released, 100 members of Asayish raided the offices of the semi-independent NRT channel in Sulaimaniyah, ransacking the office, confining the staff in the building for hours and taking all three channels of the Nalia Corporation off the air.

The security forces have conducted a wave of arrests of activists and organizers on Dec. 19 across the three provinces in the region after six protesters were killed and over 100 wounded, including members of the security forces. Offices of other political parties that share power with the two main ruling parties were torched by protesters in towns across Sulaimaniyah province and the Kurdish areas in Diyala.

The Kurdistan Region was plunged into a financial crisis in early 2014, when Baghdad and Erbil failed to reach an agreement on sharing the oil wealth of the country. Erbil, backed by the Turkish and Iranian governments, defied the central government and started exporting oil through the Turkish port of Ceyhan and to Imam Khomeini port in southern Iran.

The KRG managed to add another 300,000 barrels per day to its oil exports when the peshmerga took over several oil fields in Kirkuk as the Islamic State (IS) swooped across Iraq in the summer of 2014, sending thousands of Iraqi soldiers fleeing for their lives. But after defeating IS, Iraqi forces backed by Iranian advisers turned on the Kurds in the disputed areas and retook Kirkuk from the peshmerga on Oct. 16, leaving a hole in the coffers of the KRG. For the last two months, its 1.4 million civil servants have not received their salaries, causing wide resentment and anger.

While the protesters maintain that their anger is due to the mismanagement of the economy and widespread corruption, Kurdistan Democratic Party (KDP) officials maintained in interviews across their affiliated media channels that there is a regional conspiracy against the unity of Kurdistan.

Dilshad Shahab, an adviser to KRG Prime Minister Nechirvan Barzani, said that the government is doing everything in its power to overcome the crisis and has not stopped its efforts “despite the … plots and hostile hands that want to disrupt the peace” and stability of the Kurdistan Region.

Barzani, accompanied by his deputy Qubad Talabani, is in Germany meeting officials, including Chancellor Angela Merkel. He called for calm on Dec. 19 and asked the protesters to refrain from using violence.

Following the independence referendum, a power struggle broke out between various political parties in Kurdistan with some calling on the KRG to step down and a new transitional government to replace it. Iran is said to be pushing for change in the region and is in favor of deposing those officials who pushed for the referendum and replacing them with more friendly figures.

While the KRG maintains that it is a unified government, the reality on the ground is different, as the PUK and the KDP control their own security forces and run their finances more or less independently of each other. As activists and organizers call for further peaceful protest, there are voices calling for the possible division of the Kurdistan Region. “What has happened since yesterday is not peaceful coexistence. We should not torture our people anymore … because we have proved that we cannot live together,” Ari Harsin, the head of the Peshmerga Committee in Kurdistan's parliament and who is close to the KDP, said Tuesday night. “If the PUK, KDP and Gorran cannot guarantee a peaceful coexistence, … they should divide [Kurdistan] into two stable administrations.”