Is the sun setting on KDP-PUK dominance in Iraqi Kurdistan?

Poverty, widespread disillusionment and the emergence of new political players could spell the beginning of a new political era in Iraqi Kurdistan. 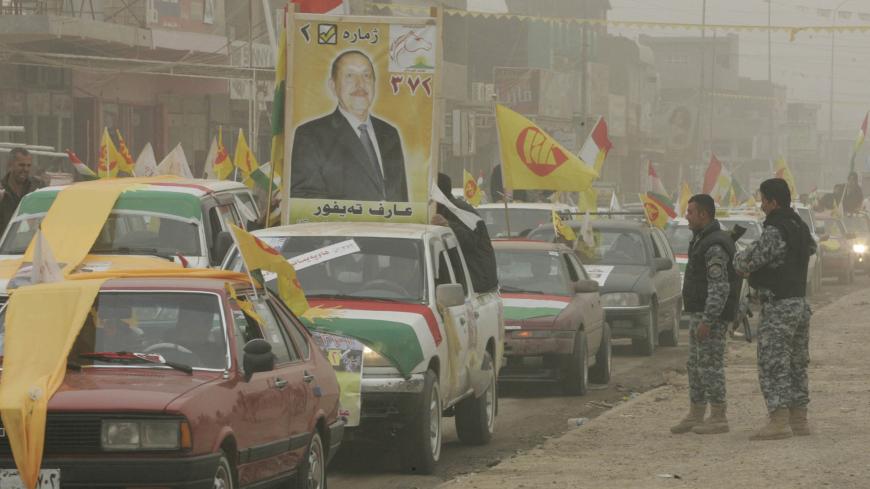 Policemen watch supporters waving the flags of Iraqi Kurdistan and the Kurdistan Democratic Party during a sandstorm at a rally, Kirkuk, Feb. 23, 2010. - REUTERS/Ako Rasheed

After 26 years of governing oil-rich Iraqi Kurdistan, the region's two main political parties are on the verge of economic and political bankruptcy.

While officials of the Kurdistan Democratic Party (KDP) and the Patriotic Union of Kurdistan (PUK) live in luxurious houses with 24/7 electricity, the majority of residents have not been receiving their salaries, which had previously been reduced, and the Kurdish economy is in a free fall, creating unprecedented levels of poverty and resentment. The situation has become so dangerously unstable that a senior peshmerga commander on Feb. 11 threatened to seize oil tankers unless the Kurdistan Regional Government (KRG) pays soldiers' their salaries.

For years, the two ruling parties used government coffers and oil revenues to hand out cash and employment opportunities to attract votes, in the process creating a bewildering and bloated civil service consuming the lion's share of oil revenues. That source has run dry since the independence referendum held in September in defiance of the Baghdad government's opposition to the measure. The plebiscite ended disastrously for the KRG, with Baghdad taking control of oil-laden Kirkuk.

Shandyar, who sells cutlery in the main bazaar in Sulaimaniyah, said of elections in the region, “I have voted three times — once for the Islamist [party], another time for the PUK and the last time was for Gorran [Movement for Change]. … But I will never vote again, because change is not possible in this society.”

Many Kurds had hoped that with the emergence in 2009 of Gorran — which adopted an anti-corruption platform — the PUK and the KDP would lose their monopoly on power. Instead, the ensuing political wrangling led to a more polarized society.

“There is too much hopelessness, in particular among supporters of the opposition groups,” said Barham Mohammad, a civil society activist from Said Sadiq, in Sulaimaniyah province. “In 2009, a large number of people flocked to Gorran in the hope of changing the system here, but that hope is largely gone.”

Mohammad, a Gorran supporter, also told Al-Monitor that he believes his party’s participation in the KRG during 2014-15 had been a failure because it could not change anything. “I will still vote for Gorran, but I know many people are disillusioned, and they aren't going to vote,” he said. No date has been set for provincial elections, but officials say they might not be held until November.

Massoud Barzani resigned from the presidency last year, after the referendum, but remains a KDP party leader. Meanwhile, provincial elections have been postponed for an undetermined period due to a Sunni request, on the grounds that they are not yet ready.

Despite disillusionment among the electorate, new political parties are hoping they can entice voters to the ballot box and challenge the PUK-KDP duopoly. One such party is the Alliance for Democracy and Justice, headed by former KRG Prime Minister Barham Salih, who might be the most popular politician in the Kurdistan Region. Another contender is the New Generation Party, headed by Shaswar Abdulwahid, a real estate and media businessman who openly opposed the independence referendum and has a fairly clean record.

While past elections had been tainted by rigging and interference from the main parties, which receive support from regional allies such as Iran, which backs the PUK, the situation appears different this time. The introduction of biometric technology could make it difficult to tamper with election results.

Rebin Abubakr, the head of the electoral commission in Sulaimaniyah, said that more than 3.4 million people are eligible to vote, but as many as 300,000 names could be duplicates, people who have died, Syrian refugees or Arabs from other parts of Iraq who have no right to vote in Kurdistan.

“This new [biometric] system will prevent, to a large extent, any … cheating in the elections,” Rezgar Hama Mehyedin, the deputy head of Iraq's electoral commission, said Feb. 3 on NRT TV.

Iran, Turkey, the United States and Baghdad appear to now prefer new players on the political scene after coming to view the PUK and KDP as irresponsible, in particular because of their pushing ahead with the September referendum against all warnings. The time is long gone when heads of states and foreign and defense ministers would stop over in Erbil to meet with KRG officials as equal partners. When German Defense Minister Ursula von der Leyen visited Erbil on Feb. 11 to discuss post-Islamic State Iraq, she did not meet with Kurdish officials.

Despite opposition to the PUK and KDP, both still have core constituencies that will support them. ”I know the PUK is corrupt, but I will still vote for them,” said Dana, a trader in Sulaimaniyah. ”That is what I have done all my life. We are a PUK family.”

“Those who are not tainted by corruption will do better in this election,” Jamil Khedir, a trader in Erbil, said while driving this reporter around the city. “You can't get anything done if you don’t have connections in this place.” He emphasized the lack of trust between officials and the people.

”Why would you need a [16-foot] concrete wall around your house,” Khedir asked, pointing to the massive concrete walls and dozens of peshmerga guards around Prime Minister Nechirvan Barzani’s sprawling compound. “These officials are scared of their people!”