The Kurdistan Regional Government says NRT's coverage of protests encouraged people to violate anti-coronavirus measures, but journalists say the closure is a violation of press freedom. 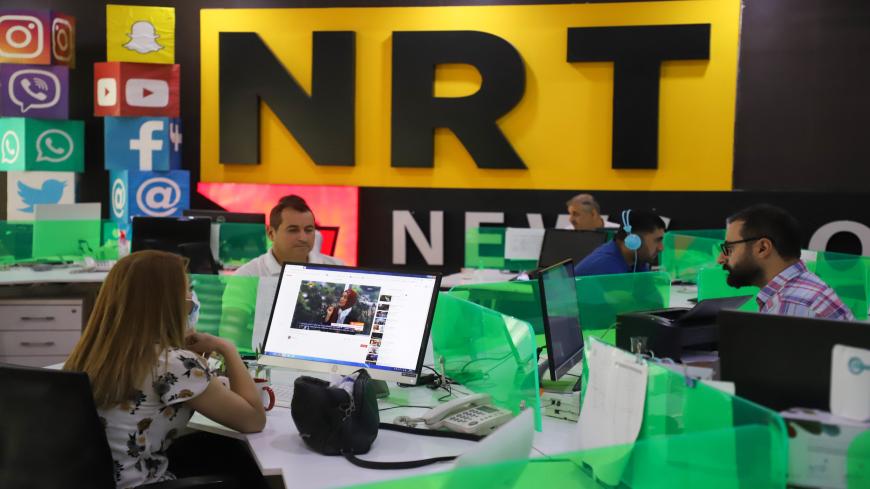 Journalists are pictured in the newsroom of Nalia Radio and Television in Sulaimaniyah city, in the Kurdish autonomous region of northern Iraq, Aug. 22, 2020. - SHWAN MOHAMMED/AFP via Getty Images

The media landscape in the Kurdistan Region of Iraq includes both party-affiliated news outlets and independent outlets.

The outlet’s critical coverage of the KRG has led to a crackdown. On Sept. 16, NRT presenter Shwan Adil was arrested and released on bail in the city of Sulaimaniyah. Adil is being sued by a senior member of the PUK, the second largest in the Kurdistan Region, for defamation.

In the region’s capital Erbil and the city of Dahuk, NRT’s offices have been closed since August.

The KRG is an ally of the United States and enjoys relative prosperity and security compared to some parts of federally-controlled Iraq. It is viewed by some in Washington as a stable, reliable partner in an otherwise volatile country.

Iraqi Kurdish journalists say they face several infringements on their press freedom, however.

“There is no guarantee that you will not get beaten, kidnapped or tortured while you cover a protest,” Rebaz Majeed, a reporter for Voice of America in Sulaimaniyah, told Al-Monitor. “There are laws to protect you, but security personnel never follow them.”

On Oct. 7, another journalist was arrested in Erbil.

Recent arrests and closures targeting NRT and others show the risks journalists face in Iraqi Kurdistan.

The KRG, however, maintains that NRT has endangered the public with its reporting on the coronavirus pandemic.

Many news outlets in the Kurdistan Region are tied to the major political parties. Rudaw and K24 are affiliated with the KDP, which is the largest party in the KRG, with a support base in Erbil and Dahuk. The PUK, which is stronger in Sulaimaniyah, owns Kurdsat News and GK Television, according to a 2019 report from the US State Department.

Abdulwahid’s New Generation Movement is the fourth-largest party in the Iraqi Kurdistan Region's parliament. There are 111 seats in the Kurdistan parliament. The KDP has 45 seats, the PUK has 21 seats, the Gorran Movement has 12 seats and the New Generation Movement has eight seats; the Islamist parties Kurdistan Islamic Group and Kurdistan Islamic Union have seven seats and five seats, respectively. The other parties have a handful of seats and mostly represent the region's Christian, Turkmen and Yazidi communities.

Some sizable, independent media outlets exist, though, including Peregraf.

The rise of media associated with the KDP and PUK came after Iraqi President Saddam Hussein was deposed in 2003, and the Kurdistan Region began to export oil, independent of the Iraqi government,  through a pipeline to Turkey, which allowed for state and party backing of the media — something that is common throughout the Middle East and not unique to Iraq.

There have been several protests in the Kurdistan Region this year amid the COVID-19 pandemic. The lockdowns aimed at mitigating the virus have hurt the economy. As in other parts of Iraq, the measures have also not led to a decrease in daily coronavirus cases. Some KRG employees have also not been paid on time for several months.

Other Kurdish media outlets have covered the demonstrations during the lockdowns, but NRT’s coverage of the protests is unique, according to the senior editor of its English channel.

“NRT covers protests very heavily and often sympathetically and this makes us stand out from other outlets in the Kurdistan Region,” Winthrop Rodgers told Al-Monitor.

On Aug. 20, the authorities closed down NRT’s offices in Erbil and Dahuk. They have yet to reopen. The same day, NRT journalist Ahmed Zakhoy was arrested in the city of Zakho after being prevented from covering a protest at the Turkish border. He was released 10 days later. NRT’s Sulaimaniyah office is still open and able to broadcast.

“Despite the KRG’s reputation for tolerance and democracy, and respect for human rights, the reality is far more problematic,” Rodgers said.

The KRG justified the closures by citing NRT’s reporting on the coronavirus pandemic and its alleged violation of the Ministry of Youth and Culture’s regulations.

“The Ministry of Youth and Culture sent several warnings to NRT, urging them to soften their rhetoric that incentivized hundreds of people to not abide by the protective regulations issued by the government,” Zebari told Al-Monitor

He cited the ministry’s Article 2 from Law No. 14, which allows suspensions and license revocations for media that “encourages public disturbance and harms social harmony.”

Zebari said that NRT’s broadcast license remains intact, and that the Erbil and Dahuk offices are “temporarily suspended.”

He added that NRT furthers the political interests of its founder. "Abdulwahid is not merely an independent entrepreneur now; he also leads a political party,” said Zebari. “They usually resort to provocative propaganda campaigns amid critical circumstances, such as during the war against terrorism and the coronavirus outbreak.”

One reason NRT is disliked in segments of Kurdish society is Abdulwahid’s support of the “No For Now” campaign during the Kurdistan independence referendum of 2017. The KDP in particular and other Kurdish nationalists adamantly supported voting for independence then, but others opposed the timing of the vote.

Both international and local observers have criticized the KRG’s actions against NRT. The journalists rights group Metro Center in Sulaimaniyah said the KRG did not explain its legal basis to shutdown NRT’s offices.

“Metro Center called on the authorities to reconsider their decision to close the channel’s offices and to provide a full accounting of how the decision was made in the first place,” the organization said in a September press release.

On Oct. 6, Human Rights Watch released a report that called the closure of NRT in Erbil and Dahuk “politically motivated” because only the offices in KDP areas were closed. The Sulaimaniyah office in PUK territory remains open.

The New York-based organization further said that security forces did not present court orders when they closed the Erbil and Dahuk offices.

Zebari disputed the report by saying NRT received multiple warnings from the Ministry of Youth and Culture ahead of the closure.

“There are hundreds of TV channels, journals, newspapers, radios, etc. that operate freely and independently in the KR,” he added, referring to an abbreviation for the Kurdistan Region.

The 2007 Kurdistan Press Law enshrines several press freedoms. However, the KRG can sue journalists under the Law to Prevent the Misuse of Telecommunications Equipment, according to the Committee to Protect Journalists.

“These laws stay on paper and the executive and judiciary powers in Iraqi Kurdistan do not apply them,” said Majeed on the Press Law.

Independent and opposition journalists in particular face an uphill battle in the region, according to Renwar Najm, a freelance journalist in Sulaimaniyah,  and it is not only because of the threat of being detained.

“There is no fair competition between party-affiliated outlets and the independent ones,” said Najm. “The first ones are given millions of dollars in oil money, and the second cannot even gain advertisements from companies.”