Five defendants, including journalists and activists, were sentenced to prison in Erbil in a decision that international rights groups say is an attack on press freedoms. 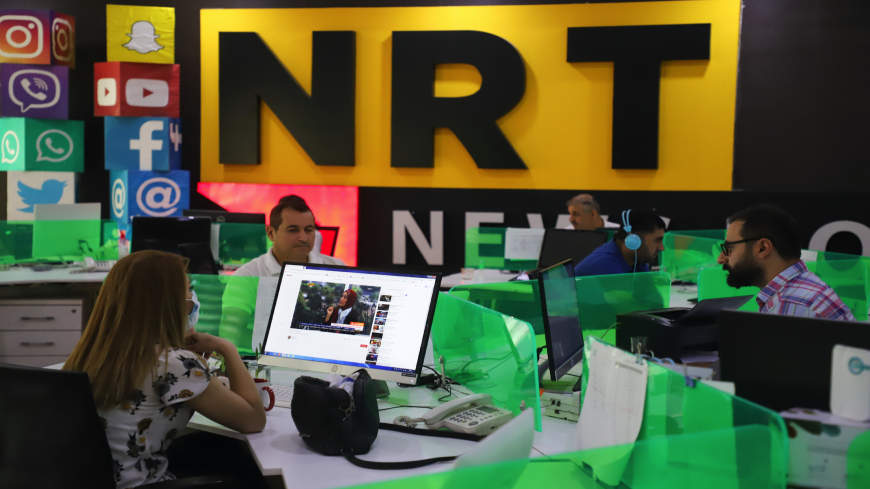 Journalists are pictured in the newsroom of NRT in Sulaimaniyah, in the Kurdish autonomous region of northern Iraq on Aug. 22, 2020. Kurdish authorities in northern Iraq are escalating their crackdown on media outlets covering anti-government protests, journalists and rights defenders told AFP, shattering the region's reputation as a liberal refuge. - SHWAN MOHAMMED/AFP via Getty Images

Five journalists and activists were sentenced last week to six years in prison on charges of threatening the security, stability and sovereignty of Iraq’s Kurdistan Region.

Combing through online messages from group chats, photos from cell phones and voice recordings, and listening to two witness testimonies, the trial by Kurdistan Region’s Judicial Council lasted only two days; in reality, the cases had been ongoing for months. Some of the defendants were jailed in August of last year after anti-government demonstrations broke out across the region.

The cases of the two remaining defendants were sent back to court for further hearings due to lack of evidence, their relatives told Rudaw English on Tuesday.

The KRG dismissed this and other statements as intervening in the judicial process.

“No one can interfere in the decisions that are being taken by the judiciary system,” KRG spokesperson Jotiar Adil told Al-Monitor.

KRG Prime Minister Masrour Barzani last week accused those arrested of being “spies” and “saboteurs,” describing them as “destructive and armed.”

Last August, protests across Kurdistan Region erupted over unpaid salaries, persistent electricity outages and a lack of business bailouts during the coronavirus pandemic. Demonstrations took place in Sulaimaniyah, Ranya and Qaladze. Attempts at gatherings elsewhere including Erbil and Dahuk were shut down by security forces, a source told Al-Monitor.

Over two dozen people, largely made up of the activists who convened the protests and journalists covering them, were rounded up and arrested.

On Feb. 7, some family members of those arrested were themselves detained as they called for the release of relatives in front of the United Nations office in Erbil.

“Some of them have tried to blow up buildings and kill and abduct foreigners in the region,” Prime Minister Barzani said at a press conference.

At the trial this week, however, no evidence supporting those charges was provided.

On Thursday, KRG President Nechirvan Barzani said he is observing the case of the five journalists and activists convicted in Erbil.

“It is the appeal court’s duty to review the case, relying on and respecting law, human rights,” he tweeted on Thursday.

The KRG has faced previous criticism over obstructing press freedoms. Last September, NRT presenter Shwan Adil was arrested and released on bail in Sulaimaniyah. Adil was sued by a senior member of the PUK for defamation. NRT’s offices in Erbil and Dahuk were shuttered in August.

Three days after Erbil’s court verdict, the US Consulate General in Erbil confirmed they have closely followed the case and will continue to monitor its outcome.

“The US has consistently engaged on the issue of freedom of expression, including for members of the press, with KRG officials and will continue to do so,” the statement read. “Democratic societies respect freedom of expression and support the ability of press members to report without fear of retaliation.”