Ongoing budget disputes with Baghdad have fueled salary delays and a lack of business bailouts in the Kurdistan Region as KRG debt swells to $27 billion. 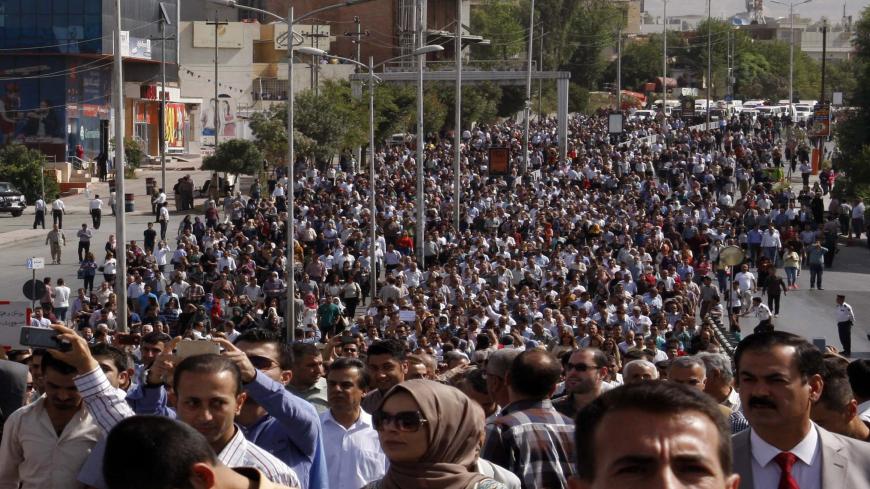 Iraqi Kurds take part in a mass demonstration in the city of Sulaimaniyah to demand payment of their salaries and an end to corruption, Iraqi Kurdistan, Sept. 27, 2016. - SHWAN MOHAMMED/AFP via Getty Images

The demonstrations follow months of budget disputes between Erbil and the Iraqi federal government, and a readiness by Iran to start negotiations with the Kurdistan Region for two free trade zones, the Iranian consul-general in Sulaimaniyah told Rudaw on Saturday.

Hundreds of protesters gathered in Sulaimaniyah on Wednesday to voice their frustrations, storming the headquarters of political parties. Smaller protests took place in Ranya and Qaladze.

Elsewhere in the region, attempts at protests were largely shut down by security forces, a source told Al-Monitor. In Dahuk, the city’s main bazaar was closed. And in Erbil, police broke up gatherings and internet access was cut for about three hours during the scheduled times of the demonstration.

Residents have tried organizing in the region for months but were regularly stopped by force, sources said. Now, they are growing in intensity fueled by a lack of coronavirus protections.

Why it matters: Under Iraq’s budget law, the Kurdistan Region is entitled to about 12% of the federal budget. In return, Erbil is required to send 250,000 barrels of crude oil per day to Baghdad. More than 90% of Iraq's budget depends on oil revenues.

But in April, Iraq’s Finance Ministry was urged by officials to stop making monthly payments of 453 billion Iraqi dinars (about $380 million) to the KRG because they had not shared oil production with the federal government, according to three members of parliament who saw the letter and reported by Iraq Oil Report.

The Iraqi federal government grew impatient and by late April, funds were cut off.

On Thursday, the KRG said the Iraqi federal government’s poor response in resolving the ongoing budget dispute is to blame for the ongoing salary delays, despite some Kurdistan Region government employees claiming they had stopped receiving salaries as early as January, three months before Iraq cut off funds.

“The federal government must not use salaries and the financial dues of the region as a political and punitive card against the people of the region,” Kurdistan Region Prime Minister Masrour Barzani told a United Nations and WHO official earlier this year. Barzani announced in May that his government’s debt now stands at $27 billion.

And the situation is complicated by the rapidly increasing number of coronavirus cases in the region.

On Friday, the KRG Health Ministry announced nearly 700 new cases of the virus, a single-day record for the region that brings the total number of recorded cases to over 20,000.

And health workers in Sulaimaniyah, many whom have also not received salaries in full or on time, have joined the protests. Dr. Sabah Hawrami, head of the city’s health directorate, told reporters on Thursday that some hospitals have been closed due to a failure to pay salaries, a story first reported by Rudaw. On Thursday, the health workers went on strike for a second time.

What’s next: The KRG and the Iraqi federal government have met multiple times since April's budget breakdown but have so far failed to reach an agreement, with the tension spilling onto a public stage in a war of words.

To appease unrest from last week's demonstratons, the Kurdistan Region’s Council of Ministers announced Thursday that they would pay salaries of government employees with any available funds.

Among the priorities of new Iraqi Prime Minister Mustafa al-Kadhimi, who was approved by parliament in May, are a pledge to draft a new budget law.

On Saturday, Kadhimi spoke with Barzani and agreed to pay 320 billion dinars ($270 million) monthly as partial restoration of the KRG’s share of the federal budget as dialogue continuesm, according to a KRG statement.

Know more: Al-Monitor reported on the record number of coronavirus cases being recorded in the Kurdistan Region, including a prominent politician contracting the virus.