Teachers say the Kurdish government is not paying on time and want their salaries to come from Baghdad, but Kurdish authorities point to a budget dispute with the federal government. 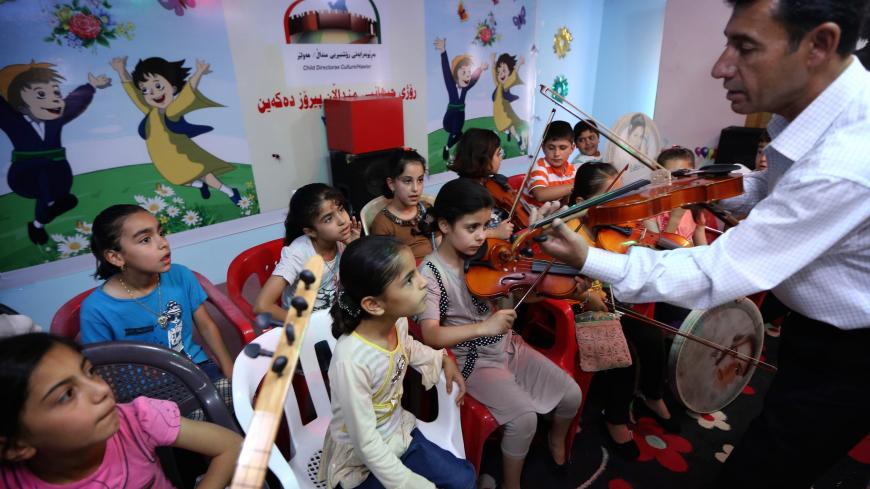 An Iraqi Kurdish music teacher gives a music lesson at a summer school in Erbil, the capital of the autonomous Kurdish region of northern Iraq, on June 17, 2014. - SAFIN HAMED/AFP via Getty Images

Ferhat is an English teacher at a public school in Erbil, the capital of Iraq’s autonomous Kurdistan Region. His salary comes from the Kurdistan Regional Government (KRG), but five months into 2020 he has only been paid his monthly salary twice. Payment problems over the years forced him and other teachers to take on second jobs.

“It’s very difficult for us,” Ferhat told Al-Monitor. “Each one of us has to work after school to live.”

The issue with the salaries stems from a budget dispute involving oil between the KRG and the federal government in Baghdad. On Saturday, hundreds of teachers and other government employees protested in the Kurdistan Region city of Dahuk demanding their salaries be paid.

Many were arrested. Al-Monitor changed the names of Ferhat and other teachers who were interviewed for their safety.

On Sunday, the KRG paid the salaries for January to Ferhat and others. Prior to that, the last payment came in March, which was for December salaries.

Ferhat used to moonlight at a soccer club in Erbil, yet this work ended when the KRG imposed a lockdown to fight the COVID-19 pandemic. With no second job and a delayed teaching salary, he borrowed $200 from a friend to help him get by during the months he received no pay.

The issue has resulted in a wave of anger at the KRG. “The solution is for Kurdish leaders to leave power. They must leave today,” said Ferhat. “We are sure they’re stealing.”

Many Kurdish teachers are accusing the KRG of corruption over the salary row and want to be paid directly by the federal government in Baghdad.

The controversy comes amid several security, economic and political conflicts in the autonomous region, which boasts of having greater safety and development than other parts of Iraq.

The situation is a little different in Kirkuk. The oil-rich city with a mix of Kurdish, Arab, Turkmens and Christian residents is under federal authority, but the KRG controlled it from 2014 to 2017 after federal troops there fled in the face of the Islamic State (IS). Some Kurdish schools there still receive their employees’ salaries from the KRG — not Baghdad, like the rest of the city’s schools.

Rehan is an English teacher in Kirkuk, where Kurdish teachers also protested recently against delayed payments and some demanded direct payment from Baghdad. Rehan said the teachers paid by Baghdad have a better situation than the thousands of KRG-paid teachers in Kirkuk.

“Most of the people’s salaries come from Baghdad and they receive their salary each month,” she told Al-Monitor. “Nearly 9,000 employees dependent on the KRG live in a hard situation. [Teachers] can’t pay rent or even buy milk for their kids. I’m not exaggerating”

The issue is not new. Both Rehan and Ferhat said teachers’ salaries were reduced at various times since 2014, in part because of the crisis caused by the battle against IS.

This year, the COVID-19 pandemic and subsequent shutdowns have damaged the economy and led to job and wage losses, like in other parts of Iraq. The fall in international oil prices threatens the large portion of the KRG’s revenue that comes from oil sales, including through neighboring Turkey. IS is also resurgent in the disputed Iraqi-Kurdish territories.

The oil and budget dispute between the KRG and Baghdad appears to be the main root of the salary issue. The KRG has an agreement with the Iraqi government that it will send some of its oil to Iraq’s state oil company in exchange for the KRG’s share of the federal budget, which the KRG uses to pay its employees. The Iraqi government says the KRG has not sent any oil to Baghdad, and last month, then Prime Minister Adel Abdul Mahdi ordered a halt to payments to the KRG. Kurdish authorities, on the other hand, say Iraq has not sent the whole share of the budget.

KRG leaders visited Baghdad this month to try to resolve the issue, and indicated that they intended to pay the salaries. January's salaries were then paid Sunday to teachers and others on the KRG payroll, Ferhat and Rehan confirmed. Iraq’s new prime minister, Mustafa al-Kadhimi, pledged to work out the problem with his Kurdish counterparts.

A KRG spokesman declined Al-Monitor’s request for comment on the salary issue.

The anger has not dissipated since the payment. The KRG’s international advocacy coordinator, Dindar Zebari, who frequently speaks to foreign organizations working in Kurdistan, said the arrests in Dahuk happened because of concerns that the coronavirus could spread via the crowded demonstration.

Zebari also said the Kurdistan Workers Party (PKK) — a militant Kurdish group from Turkey that has poor relations with the KRG — was involved in the protest. The comment angered some Kurds.

“They said it was PKK,” Ferhat said. “But [teachers] just wanted their rights and salaries.”