Disagreements over the dollar exchange rate and foreign loans have blocked the parliament from passing the country's budget bill for a fifth time. 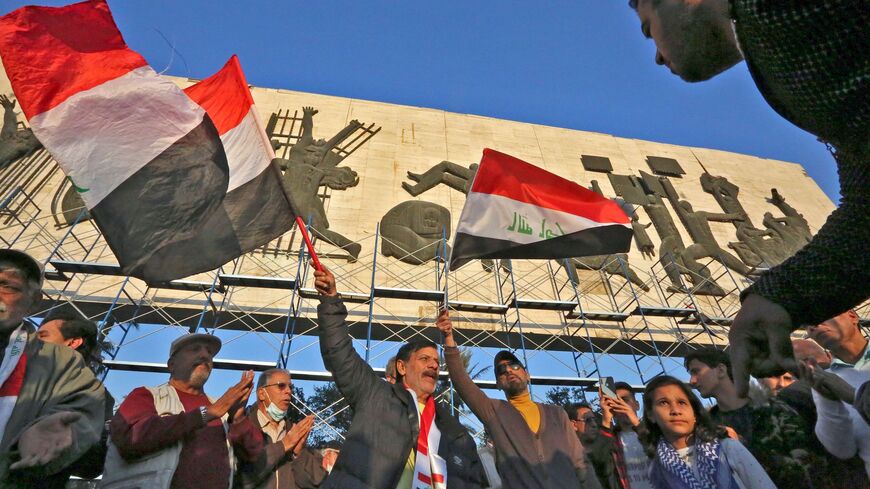 Iraqi protesters take part in a demonstration against a currency devaluation at Tahrir Square in Baghdad on Dec. 21, 2020. - SABAH ARAR/AFP via Getty Images

Iraq’s parliament failed to pass the federal budget bill on Sunday despite a last-minute agreement between Erbil and Baghdad over the Kurdistan Region’s share. Now disagreements loom over reversing the dollar exchange rate and the addition of foreign loans.

In December, Iraq’s cabinet approved a 2021 draft budget of 150 trillion Iraqi dinars (about $103 billion) and sent it to the parliament for approval. But disputes over the Kurdistan Regional Government's oil and non-oil revenues have delayed the vote.

In January, a KRG delegation arrived in Baghdad to seek an agreement on northern Iraq's share of the budget. Erbil and Baghdad had reached agreements in the past but several political blocs objected to them.

A vote was scheduled for mid-March, but it was delayed to last Saturday, then again to Sunday, when it was pushed back another four hours as talks intensified to reach a deal. Representatives from the KRG and a bloc within Baghdad’s Council of Representatives removed a large hurdle when they reached a last-minute consensus over Article 11, which pertains to the Kurdistan Region’s share of the overall budget.

The new amendment called for the KRG to turn over 250,000 barrels of oil a day or their equivalent value to Baghdad and also hand over 50% of non-oil revenues such as customs and taxes, parliamentary finance committee member Ahmed al-Saffar told Rudaw. In return, a provision would allow Iraq’s federal government to more efficiently cut off cash transfers to the KRG if it didn’t comply with the law.

Despite this compromise, no session was held due to a failure to attain a quorum, marking the parliament's fifth unsuccessful bid to pass the legislation. Iraq’s economic crisis continues to grow, fueled by the coronavirus outbreak and collapsed oil prices. The country has the world’s fourth-largest oil reserve and depends on oil revenues to fund about 95% of its national budget.

The low oil prices have critically impacted the salaries of Iraq’s civil servants. Both Baghdad and Erbil have struggled to pay workers on time. In some cases, employees have gone many months without receiving a paycheck.

The bill remains in limbo as political blocs grapple over the dollar exchange rate and the inclusion of foreign loans.

In December, Baghdad devalued the dinar to close an expanding budget inflation gap. Iraq’s central bank increased the sale price of the dollar to both banks and currency exchanges from 1,182 dinars to 1,460, a nearly 24% bump.

The move was met with disapproval by some lawmakers. They argued it severely impacted the country’s poor citizens as merchants have taken advantage of the devaluation to sharply increase the prices of basic commodities. The lawmakers began collecting signatures for a petition to restore the original rate.

But the government has stuck to its decision and maintained that the central bank, not parliament, has authority over the national currency’s valuation.

Iraqi Prime Minister Musfata al-Kadhimi said in a statement Tuesday that devaluing the dinar was a “purposeful vision and strategy” and the country will see growth results in cash reserves and Iraq’s international credit rating.

The government, Kadhimi continued, is “looking forward to expediting the approval of the federal budget law by the Council of Representatives.”

No date has been set for the next federal budget vote. On Tuesday, the Council of Representatives requested parliamentarians to attend a voting session Wednesday.

The budget legislation “directly address [citizens'] needs as well as enables the government to proceed,” the council wrote in a statement received by the Iraqi News Agency.