Iraq's Central Bank moves to strengthen dinar against US dollar

The plan includes a measure to buy more Chinese yuan. Other states are also considering using the yuan more. 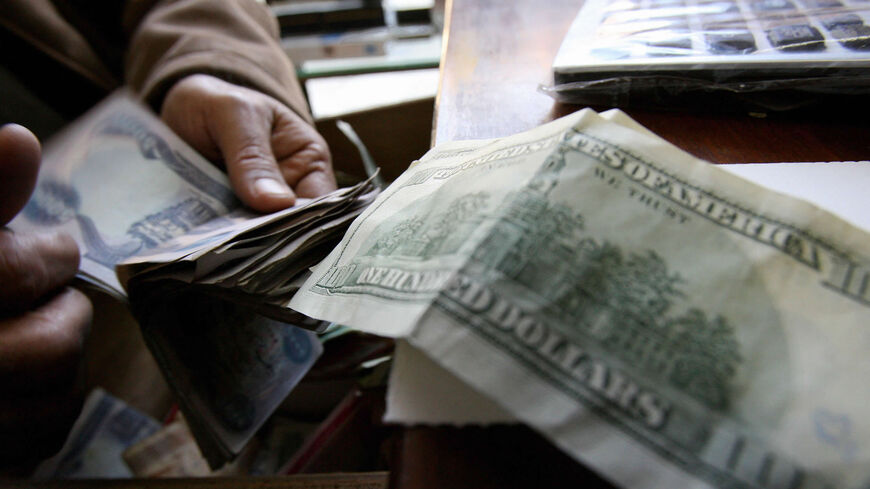 An Iraqi man counts Iraqi dinars as he exchanges them for US dollars at a money exchange office, Baghdad, Iraq, Dec. 12 2007. - Ali al-Saadi/AFP via Getty Images=

Iraq's Central Bank has a new plan to increase the value of the Iraqi dinar against the US dollar.

The bank released a statement this week outlining the plan. The measures are as follows:

What it means: For years, the official rate of the US dollar to the Iraqi dinar was $1 to 1,182 dinars. Both dollars and dinars are used in Iraq, and the rate on the street was often rounded up to 1,200 dinars to the dollar.

In December 2020, Iraq's Central Bank lowered the dinars’ exchange rate to 1,470 dinars to the dollar for individuals and 1,460 for banks. The decision was due to a liquidity crisis, low oil prices and economic hardship related to the coronavirus pandemic.

Central banks often devalue their own currency in a bid to boost exports. Exporting something priced in the local currency becomes cheaper in foreign currencies. Iraq’s major export, however, is oil, and oil is priced in US dollars.

Another reason a country may devalue its currency is to reduce local debt burdens. Any US dollars Iraq collects, such as via oil revenue, are now worth a larger amount in dinars. This makes more sense in the case of Iraq, since the low oil prices in 2020 led to less government revenue converted to dinars.

The Iraqi government wanted to increase its cash amount with the devaluation, the Iraqi Kurdish news outlet reported in 2020. Any US dollars that the government receives are now worth more in dinars.

Devaluing currency has significant downsides. Argentina's peso devaluation has been a disaster, leading to a liquidity crisis in the South American country.

Why it matters: Iraqi Prime Minister Mohammed Shia al-Sudani, who took office in October, has said he wants to increase the value of the Iraqi dinar.

“The interests of the needy were not taken into consideration in devaluing Iraq's currency. We tend not to repeat that in this Cabinet,” said Sudani in November, as reported by Kurdistan 24.

Like other countries in the region, the Iraqi economy has suffered as a result of Russia's invasion of Ukraine. The war led to food and fuel price increases in Iraq.

Know more: Other central banks in the Middle East are also showing increased interest in the Chinese yuan. Saudi Arabia is considering pricing oil sales to China in yuan, as opposed to the US dollar. Egypt decided in August to issue bonds denominated in yuan. In April, the Bank of Israel added Chinese yuan as well as Australian and Canadian dollars to its reserves.