A number of leaders of the Coordination Framework, the bloc leading the new Iraqi government, are pushing to increase the value of the dinar in an attempt to support the poor — yet some argue the measure could backfire. 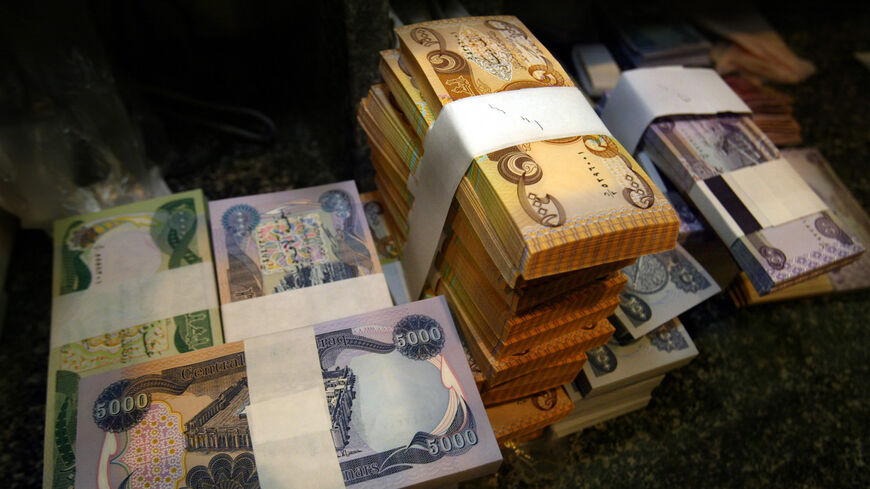 The new Iraqi dinar banknotes are shown ready for distribution at the Bank of Baghdad, as the currency is introduced for the first time, Iraq, Oct. 15, 2003. - Paula Bronstein/Getty Images

BAGHDAD — Prominent Iraqi politician and former Prime Minister Nouri al-Maliki called on the government of Mohammed Shia al-Sudani to increase the exchange rate of the Iraqi dinar against the US dollar by 5.5% in the coming days, amid warnings by economists that such a move could spiral the economy into recession.

The previous government, headed by Mustafa al-Kadhimi, had launched a financial and fiscal reform plan known as the White Paper, mainly aimed at restoring balance to the economy, reducing the public sector and investing financial resources in improving public services and developing productive sectors. The White Paper confirmed that the previous exchange rate was detrimental to the agricultural and industrial sectors.

On Dec. 19, 2020, the Central Bank of Iraq devalued the dinar against the US dollar, which dropped from 1,182 dinars to 1,450 dinars per $1, due to the financial crisis that hit the country in the wake of the drop in oil prices in the global market to less than $30 a barrel, and the increase in Iraqi government spending on state employees' salaries. To secure these salaries Iraq had resorted to loans from banks and to the re-deduction of bonds to the Ministry of Finance, which amounted to more than 30 trillion dinars ($20.6 billion).

In a press statement, the central bank at the time said the structural distortions in the Iraqi economy impoverished public finances and restricted the ability of reform due to the economic policy leadership and the primacy of politicians' priorities over the economy and its stability.

After the reconsideration of the exchange rate, a strong current emerged led by a number of politicians, most notably Sudani who called for restoring the dollar exchange rate to its previous value. Sudani had argued at the time that a devaluation of the dinar would trigger a "revolution of the hungry."

Back then, despite the wave of rejection, the new dollar exchange rate served a number of local industries that were able to compete with imported goods and achieve self-sufficiency. Imports decreased from $21.5 billion in 2019 to $15.6 billion in 2021.

Moreover, foreign investors rushed to invest in private and mixed companies, at more than $35 million in 2021. Iraq’s exports of other commodities, excluding crude oil, increased by more than $400 million during the same year, to reach $4.6 billion up from $3.8 billion in 2020.

In 2022, this upward trend was countered by the repercussions of the coronavirus pandemic.

Once at the helm, Sudani backtracked. He now argues that the Central Bank of Iraq, which is an independent body, is the authority competent to decide on the exchange rate and that the government cannot interfere. On Oct. 31, Sudani met Central Bank Gov. Mustafa Ghaleb and the two discussed monetary policy developments.

Ever since Sudani took office, the market has been witnessing a stagnation phase. Businessmen and citizens wary of the devaluation of the dinar cut their purchases of assets to avoid any future loss ensuing from the exchange rate difference.

Kadhimi's government was unable to remedy the negative implications of the dinar devaluation, in particular those affecting the poor classes. The government had allocated more than $6 billion to support vulnerable groups, but parliament reduced it to less than $1 billion.

Ghaleb had asserted that the devaluation of the dinar added to the general budget 23.5 trillion dinars ($16.2 billion).

The central bank warned that reconsidering the exchange rate would confuse local markets, threaten investments, lead to economic stagnation, weaken confidence in monetary policy and the value of the local currency, increase speculation in foreign currencies and promote hoarding of foreign currencies as a safe haven.

It noted that the old exchange rate provided imported goods and services with a competitive advantage, which prevented the advancement of local products.

Economists had warned against restoring the dinar exchange rate to its previous rate in the coming days, arguing this measure would create problems that cannot be addressed during the next two years.

Economic expert Mahmoud Dagher told Al-Monitor that addressing a mistake with another mistake would surely undermine the national currency. “The economy will collapse, and all goods will be sold and bought in US dollars only,” he warned.

He said that increasing the value of the dinar would also lead to problems in terms of the contracts between the government and the private sector, as well as between companies and retail business owners. “These issues cannot be resolved easily. The instability of the exchange rate would also affect the investment environment. The Iraqi dinar is not supposed to bear the brunt of the financial policy problems,” he said.

Dagher urged the government to cut the state employees' salaries, which amount to more than 63 trillion dinars ($43 billion) and to allocate the savings made from this reduction for achieving economic development.

He pointed out that fiscal policy remains marred by populism, as the government refuses to cut the salaries of employees, impose taxes or reduce public spending.

According to Mazhar Muhammad Salih, a government financial adviser, there may be an option to gradually increase the value of the dinar. “Any future adjustment of the exchange rate must be gradually implemented over a one-year period to provide an appropriate climate for price adjustment,” he told Al-Monitor. “Returning the dinar to its previous exchange rate against the dollar is impossible, because this would drain reserves and burden public finances by more than $16 billion.”