The Kurdistan Democratic Party is rushing to organize an independence referendum; however, there is no agreement on this matter among other Kurdish parties, and Baghdad, Iran and Turkey have strong reservations. 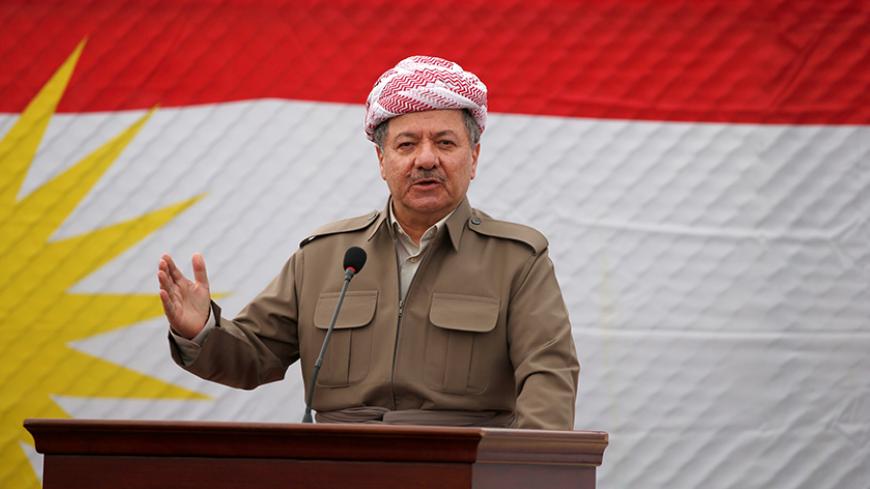 Kurdistan Regional Government President Massoud Barzani speaks to the media during his visit to the town of Bashiqa after it was recaptured from the Islamic State, east of Mosul, Iraq, Nov. 16, 2016. - REUTERS/Azad Lashkari

Barzani noted that “a united Iraq” does not exist, adding, “The result will not lead to immediate independence. But if citizens empower us to act, we will proceed with independence, and the international community will know what the Kurds want.”

Although the Kurdish parties in Iraqi Kurdistan all agree on the inevitability of securing an independent Kurdish state, they have have been arguing about which date to hold a public referendum on independence from Iraq.

With the internal political dispute between the parties in Erbil and Sulaimaniyah, and the constitutional vacuum crisis in the Kurdistan Region, talk about independence has become an attempt to escape the thorny issues by trying to move a common cause forward.

There are a number of pending issues between Baghdad and Iraqi Kurdistan that might take years to be resolved before peaceful secession is reached. The disputed areas, including oil-rich Kirkuk, top these issues, as well as the conflict over the oil fields and the pipeline through the Turkish Ceyhan port to the Mediterranean Sea. Problems involving the waters of common lakes and rivers and the situation of national and religious minorities are also unresolved. The independence or secession project seems the most complicated, and it cannot be completed through a public referendum only.

The KDP, led by Kurdistan Regional Government President Massoud Barzani, announced Jan. 11 the formation of a committee to decide the fate of disputed areas with the federal government and to hold a referendum and achieve Kurdistan’s independence. Barzani asserted the formation of a delegation to negotiate independence with Baghdad, but took back the decision due to “developing relations with the federal government.”

Nevertheless, the main Kurdish parties in Kurdistan, such as the Patriotic Union of Kurdistan headed by former Iraqi President Jalal Talabani, have a different plan for the referendum date, and they ruled out the possibility of holding it this year. Party member Farhad Rasoul told Al-Monitor, “All Kurdish parties agree on the importance of fulfilling the Kurdish state dream, but before that we need to solve our internal issues. Iraqi Kurdistan’s parliament is still defunct and the ministries are governed by proxy in Erbil. There is no imminent solution for the presidential crisis.”

Rasoul wondered, “How is it possible to form a Kurdish delegation to solve the issues with Baghdad, while internal problems in Iraqi Kurdistan persist?” He added, “The internal and international stages are not set yet for a referendum on independence."

The same position has been voiced by Hoshyar Abdullah, a leader in the Kurdish Movement for Change (Gorran), who told the New Sabah newspaper that Barzani’s March 27 declaration regarding Kurdistan’s independence “reflects the KDP’s failure” and “it serves the early electoral campaign launched by Barzani’s party.”

The Kurdistan domestic crisis started in 2015, when Barzani’s mandate as president ended and no new presidential elections were held, as the work of the Kurdistan parliament was suspended. This led to a serious political row between Barzani’s party on the one hand and Talabani’s party and the Movement for Change on the other.

In Baghdad, the State of Law Coalition, which is the largest bloc within the Shiite Iraqi National Alliance, said March 25, “The statements made by the ruling family in the Kurdistan Region are not new as there have been repeated secession threats and the secession decision is not in the hands of the ruling family in the Kurdistan Region. Such a decision requires an international approval, i.e., a regional international decision that involves neighboring countries.”

Sajida al-Afandi, a member of parliament for the Sunni Union of National Forces, told Al-Monitor, “Neither the domestic nor the foreign circumstances are currently ripe for Kurdistan’s secession from Iraq. We believe that Erbil's threats regarding holding a referendum on secession are intended to place pressure on Baghdad to achieve oil or financial gains and perhaps have a better negotiating position in any national settlement that may follow the disappearance of the Islamic State."

Afandi added, “Barzani’s statements regarding independence do not serve the national interest now as the war against IS is not over yet, but he is trying to win the Kurdish street before the fighting ends.”

Add to this the regional — Iran's and Turkey's in particular — absolute rejection of Iraqi Kurdistan independence. Turkish Prime Minister Binali Yildirim said April 3 that the Kurdish statements on the referendum are “unacceptable” and stressed that Turkey will continue to support its fellow Turkmens in Iraq.

Commenting on the decision to raise the Kurdish flag in Kirkuk province, Turkish President Recep Tayyip Erdogan called April 4 for the taking down of the Kurdish flag and warned that refraining from doing so would harm the Kurds’ relations with Turkey.

Several factors make it very difficult to proceed with the secession project and declare a Kurdish state, namely the opposition to the project from Baghdad, Iran and Turkey; this opposition is expressed by large Kurdish communities, in addition to the domestic Kurdish differences.

However, working toward this major goal may lead to significant gains, especially insofar as Erbil is concerned, as it is seeking to annex disputed areas from Mosul to Kurdistan (such as Sinjar), reach a new oil agreement and increase its share in the public budget, creating a better negotiating position in any settlement project that follows the liberation of the country from IS.