The Turkish foreign minister's recent visit to Baghdad and Erbil included a push for appointing Turkmens to Cabinet positions in Iraq. 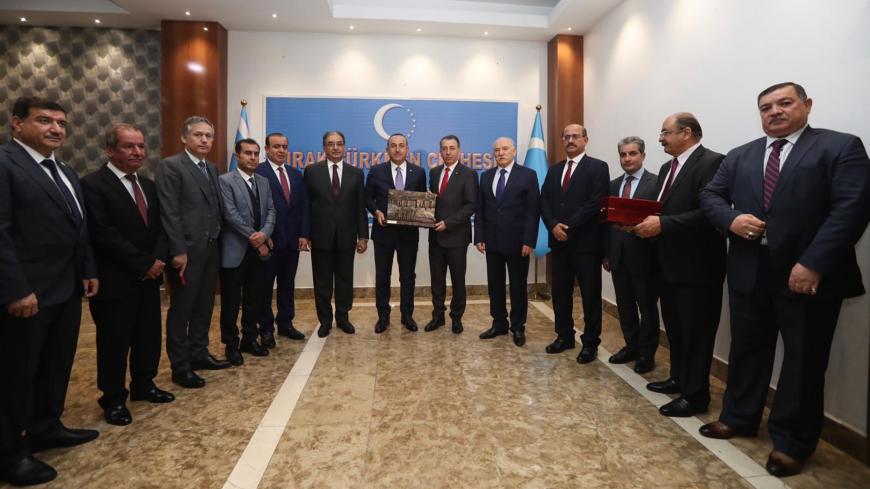 SULAIMANIYAH, Iraq — In addition to discussing bilateral relations and an energy deal on his visit to Iraq April 28-29, Turkish Foreign Minister Mevlut Cavusoglu addressed the issue of Turkmen participation in the government.

Cavusoglu spoke of the importance of gaining Turkmen representation in both the still-forming Cabinet of the Kurdistan Regional Government (KRG) in Erbil and the Cabinet-influx of the central Iraqi government in Baghdad.

"Our Turkmen brothers and sisters, the second-largest ethnic group of the KRG and third of Iraq, should be duly represented both in Iraq and the KRG,” Cavusoglu tweeted April 29 after meeting with members of the Iraqi Turkmen Front (ITF) political movement in Erbil. He also held separate talks with KRG Prime Minister Nechirvan Barzani, Deputy Prime Minister Qubad Talabani and Masrour Barzani, head of the Kurdistan Region Security Council and prime minister-designate.

Aiden Maruf, an ITF member of the Kurdish regional parliament who participated in the Cavusoglu meeting, told Al-Monitor, "Cavusoglu’s visit was mainly aimed at boosting political, diplomatic and trade ties between Ankara and Erbil, as well as Ankara and Baghdad."

Turkey's relationship with the KRG soured after the failed Kurdistan referendum for independence in late 2017. But considering the tumultuous state of regional relations and the importance of Kurdistan, Turkey is working to normalize relations.

Turkey sees the Turkmen community in Kirkuk and the Kurdistan Region as an important focus of its relations with Iraq, Maruf said, adding that Turkey wants Turkmens to be represented in the political process and to shoulder official posts in both Erbil and Baghdad, asserting that is their natural right.

In February, Kurdistan lawmakers elected Turkmen Muna Qahwachi as the second deputy speaker of their parliament. But Maruf pointed out that Turkmens previously asked for an adviser for Turkmen affairs in the Kurdistan presidency, and the post of second deputy of the KRG prime minister. These demands haven't been met.

KRG spokesman Safeen Dizayee told Al-Monitor that those demands should be addressed to the new KRG leadership, and that he believes all minorities should have roles.

Turkey is now turning to its neighbor Iraq for help after the US administration announced it was ending sanctions waivers that allowed some countries, including Turkey, to temporarily continue buying oil from Iran. The oil-rich, multiethnic and disputed city of Kirkuk is the perfect place for Ankara to turn.

“We have a single solution for Kirkuk that we put forward 15 years ago: Our solution is to make Kirkuk an independent region, where all components share power equally," said Mahdi.

Massoud Abdul Khaliq, an independent Kurdish writer and political analyst, spoke with Al-Monitor about a new border crossing Ankara and Baghdad have been discussing that would serve as an alternative to Kurdistan's Ibrahim Khalil crossing. Ibrahim Khalil currently is the only official crossing between Iraq and Turkey and its customs duties go to the KRG. Opening a new trade crossing southeast of the current one would allow Turkey to bypass Kurdistan and deal directly with Baghdad.

In 2014, the KRG signed a 50-year deal under which Ankara allows the KRG to export oil through Turkey to outside buyers. Now the KRG’s obligation under the contract is the main hindrance keeping the Kurds from submitting oil revenues to Baghdad.

According to Iraq's 2019 budget, the KRG should provide 250,000 barrels of oil per day to the Iraqi State Organization for Marketing of Oil, and submit the revenues to the federal government. Baghdad considers KRG exports through Turkey to be "smuggled oil."

As the KRG is not submitting its oil to Baghdad as required by law, Iraqi Prime Minister Adel Abdul Mahdi is under heavy pressure from loyalists to former Prime Minister Haider al-Abadi to stop paying full salaries to KRG employees. Thus, any future oil agreement between Baghdad and Erbil will have to take into consideration the deal in place with Turkey.

The Turkish foreign minister discussed potential joint operations among Turkey, the KRG and Iraq against the outlawed PKK, whose fighters are based in the Qandil Mountains, stretching from the Iraqi Kurdistan Region across the border with Iran.

By putting political, economic and military pressure on both Erbil and Baghdad, Turkey hopes to compensate for the losses it is experiencing because of the US sanctions against Iran. Ankara also wants to enhance its position in the region by supporting the Turkmens' efforts to secure greater roles in sovereign posts.