How viable is Turkey’s bid for military partnership with Iraq?

Turkey and Iraq have agreed to work on sealing a military cooperation agreement, and although regional developments dictate the solution of bilateral crises, the volatile relationship between the two neighbors calls for tempered optimism. 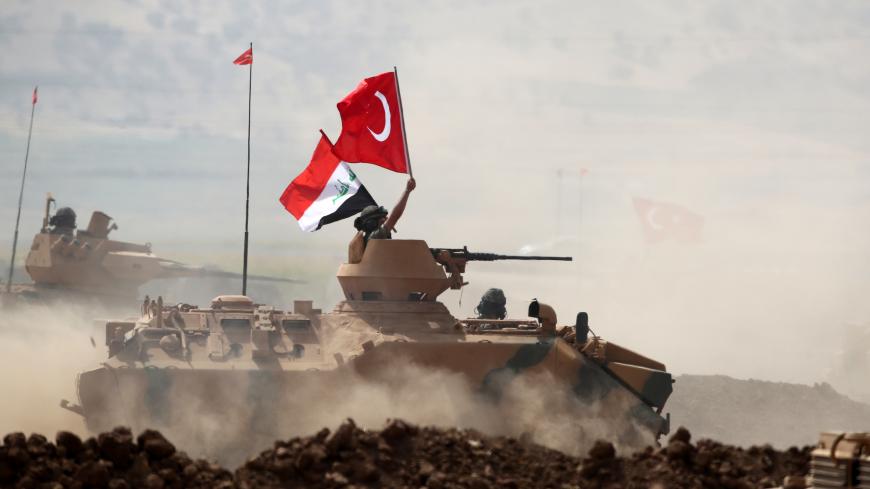 Turkish and Iraqi troops are pictured during a joint military exercise near the Turkish-Iraqi border in Silopi, Turkey, Sept. 26, 2017. - Reuters/Umit Bektas

During Iraqi Prime Minister Adel Abdul Mahdi’s recent visit to Ankara, Turkish President Recep Tayyip Erdogan raised the prospect of a security and military cooperation accord between the two neighbors, generating some rather splashy headlines in the media. Though Turkey and Iraq have put nothing on paper yet, the mere declaration of intent to resolve problems that have kept them at loggerheads in recent years has created an air of a new beginning. Security cooperation, however, is not a new topic for them. Turkey and Iraq signed a security deal in 2008, but it has had little effect on the ground. And the stumbling blocks in bilateral ties remain tough, calling for more tempered expectations.

Speaking after his May 15 meeting with Abdul Mahdi, Erdogan stressed the importance of cooperation against the Islamic State (IS) and other groups, including the Kurdistan Workers Party (PKK), which takes refuge in the mountains of northern Iraq and is considered a terrorist organization by Ankara. “We’ve decided that an agreement on military cooperation and trust between Turkey and Iraq will be an appropriate step,” Erdogan said at the joint press conference. He added that Turkey’s foreign and defense ministers and the intelligence chief would hold a meeting soon with their Iraqi counterparts to discuss details of the deal.

Abdul Mahdi also called for joint efforts to combat terrorism. “There are many agreements between Turkey and Iraq, including a security agreement in 2008, but we cannot say it has been utilized very effectively,” he said, stressing that Bagdad “will never accept” security threats to Turkey originating from Iraqi territory.

Beyond security cooperation, Turkey’s vision of ties with Iraq in the coming period could be summarized as follows, based on Erdogan’s remarks at the presser:

Despite the optimistic outlook that those points suggest, Turkish-Iraqi ties are fraught with long-standing problems that could eclipse myriad signatures on paper.

On the commercial front, Iraq is the No. 1 buyer of Turkish goods in the Middle East. Turkey’s exports to Iraq were worth $8.3 billion last year and $9 billion in 2017. The bilateral trade volume, meanwhile, stood at $9.7 billion last year and $10.5 billion in 2017. Erdogan had set the target of $20 billion back in 2009, when the bilateral trade volume was $5.2 billion. A decade later, commercial exchanges remain well behind target, while Turkey faces increasing competition from Iran on the Iraqi market.

When it comes to diplomatic missions, Turkey’s consulates in Erbil and Sulaimaniyah are currently operational, while its plans to reopen those in Mosul and Basra are not actually new. The reopening of the Basra consulate was postponed last year as violent protests broke out in the city. Turkey’s consulate in Mosul, which IS seized in June 2014 along with 49 hostages, was destroyed during operations to liberate the city. Of note, in the days of the IS' rise, many Iraqis saw Turkey as backing the jihadis as it sought to defend Sunni groups rebelling against Baghdad.

Also, Turkey’s diplomatic efforts to reopen the Mosul and Basra consulates have led some to question whether Tehran could be playing a hampering role, given its regional rivalry with Ankara.

Still, Ankara has requested Baghdad’s consent to launch new consulates in Najaf and Kirkuk. While the Iraqi attitude on Najaf has been positive, the notion of granting Turkey a diplomatic channel in Kirkuk — an oil-rich region plagued by ethnic disputes, where Ankara backs its Turkmen kin — has raised eyebrows. Recently, Ankara has been pressing Baghdad to engage with the Iraqi Turkmen Front, the main Turkmen political party, and ensure its representation in the government, wary that Turkmens are gravitating to Shiite and Sunni parties instead of seeking unity. Ankara is particularly irked that the Iranian axis has been increasingly resonating with the Turkmens since the beginning of the fight against IS in 2014 and Baghdad’s Iranian-backed seizure of Kirkuk from the Kurds in 2017.

Iraq has regained importance for Turkey as it looks for alternative oil supplies after Washington’s decision to end sanction waivers for buyers of Iranian oil, as evidenced by Foreign Minister Mevlut Cavusoglu’s visits to Baghdad and Erbil in late April.

In 2017, Iraq invited bids for a new export pipeline for Kirkuk’s oil to replace an existing one, which is old and damaged, but no progress has been reported since then. The new pipeline — 350 kilometers (217 miles) long and with a capacity to carry 1 million barrels per day — is planned to start in Salahuddin province and pass through Kirkuk and Mosul before crossing into Turkey at Fish Khabur. In remarks May 16, Iraqi Oil Minister Samir Ghadban confirmed the plan remained in place, adding that Turkey had said it “could buy more oil” from Iraq.

Kirkuk’s oil is currently being transported through another pipeline in the Kurdistan region. The flow was halted amid tensions over the Kurdish independence referendum in September 2017. Exports resumed in November 2018, ranging between 60,000 and 100,000 barrels per day.

Meanwhile, Turkey has sought to open a second border crossing with Iraq as an alternative to the existing one, which is at the border with the Kurdistan region. The planned new crossing — at Ovakoy, where the borders of Turkey, Iraq and Syria meet — is designed to serve multiple aims: increase bilateral trade, bypass the Kurdistan region and end the monopoly of the existing crossing at Habur, create a safe zone along the Syrian border and all the way to Mosul and thus cut off the PKK’s connection to Sinjar in Iraq and Rojava in Syria. Despite its pledges of cooperation, Baghdad has dragged its feet on the project, which would shift the balance on a route that is outside its control. Baghdad is likely refraining from angering the Kurds at a time when it is trying to normalize ties with them. Remarkably, Ovakoy was not even mentioned at the Erdogan-Abdul Mahdi presser.

Other tensions in bilateral ties stem from Turkey’s cross-border operations against the PKK and from Turkey's military bases in northern Iraq, including the one at Bashiqa near Mosul. Although the two sides share sensibilities on territorial integrity and security in rhetoric, their perspectives remain widely apart. Ankara is pressuring Baghdad with the argument that Sinjar is becoming a second Qandil, while the dominant political forces in Iraq insist on Turkey’s withdrawal from Bashiqa. Civilian casualties in recent Turkish operations have rekindled indignation against Turkey’s military presence. When it comes to PKK camps on the territory of the Kurdistan region, the central government in Baghdad has neither the means nor the capacity to intervene on the ground.

Efforts by Saudi Arabia and other Gulf countries to win over Iraq are posing additional hardship for Turkey, on top of the influence of Iran. To keep up in the race, Ankara needs to rapidly overcome contentious issues and regain the momentum of 2008, at least.

In sum, the shared pushback against the Kurdish independence referendum in 2017 has allowed Ankara to move back closer to the central government after its Iraqi policy was torn between Erbil and Baghdad from 2009 onward. While gradually breaking the ice with Baghdad, it has begun to seek normalization with Erbil as well, pressed by the need for oil supplies, among other factors. Yet the experience from the near past shows that positive steps like the creation of the High-Level Strategic Cooperation Council in 2008, the signing of 48 memorandums of understanding and a series of high-level meetings in 2009 have failed to end the volatility of the relationship. The current warming of ties is the result not of efforts to solve long-standing problems but rather to postpone or push them to the back burner. The past decade offers some serious lessons on how hard it is to overcome this vicious circle. The new momentum is certainly encouraging, but can be hardly taken for granted, given the numerous obstacles that persist.