Turkey lays out plans for Iraq's Kurds after independence vote

Turkey is considering a new border crossing to Iraq designed to avoid the Kurdistan Regional Government, but the terrain of the proposed route is controlled by Kurds. 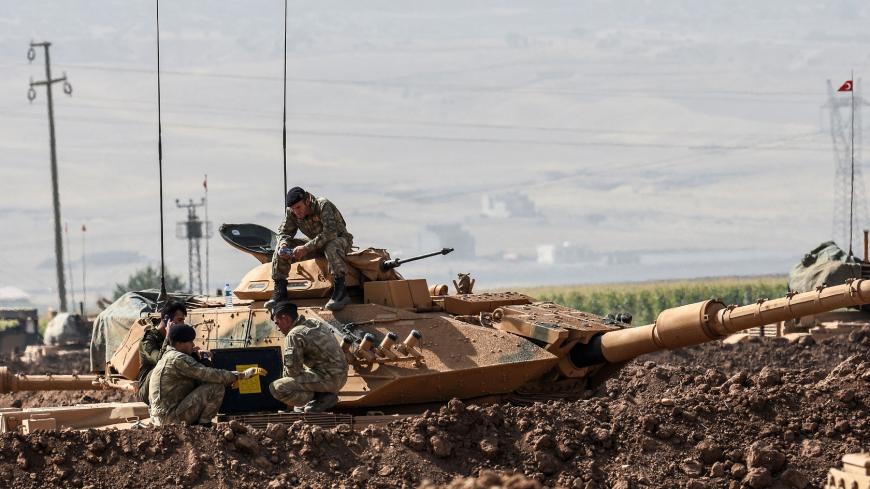 Turkey is studying a variety of ways to punish Iraqi Kurds for approving an independence referendum Sept. 25. In addition to restricting oil trade and cutting off airspace, one plan being considered would create a new border crossing to Iraq that supposedly would allow Turkey to bypass northern Iraq and the Kurdistan Regional Government (KRG) altogether.

Doing so, however, would require some creative problem-solving.

As Turkey was debating what measures to take, someone resurrected an old proposal to open a new crossing at the junction of the Iraq-Syria-Turkey borders at Ovakoy. The location offers an alternative to the extremely busy, KRG-controlled Habur crossing, which provides Kurds with income from crossing fees and taxes.

According to the plan, Iraq's central government in Baghdad would control the new crossing, and all exports from Turkey to Iraq would reach Tal Afar and Mosul via the new gate. This scenario was proposed years ago by military and nationalist circles in Turkey but was rejected by the ruling Justice and Development Party.

Curiously, those who are now advocating the plan seem to be unconcerned with the hard reality that the 50-kilometer (31-mile) stretch of land between Ovakoy and northern Mosul is under the control of the Kurdish peshmerga and that the Iraqi government hasn’t controlled even 1 meter of land on the Iraq-Turkey border since 1991. The proposed route is between Ovakoy and Nusaybin — and, as everyone knows, Nusaybin faces Syria’s Qamishli, which the Kurdish People’s Protection Units (YPG) control.

Besides, could Turkey even afford to give up the Habur crossing through which all of Turkey’s exports currently pass not only to Kurdistan but to all of Iraq?

According to Bulent Tufenkci, Turkey's minister of customs and trade, the new route would run from Ovakoy west of the Tigris River near Dayrabun in Iraq, which would require extensive use of the territory where Turkmens are the majority. This would mean isolating the KRG territory. The new trade route would head straight to Tal Afar, thus avoiding KRG taxes and fees. The route would then extend to Mosul and reach the central government in Baghdad, avoiding the Kurdish-populated towns of Zakho and Dahuk.

“It may take two to three months or a bit longer to activate this route," the minister said Sept. 26. "Roads on the Iraqi side have to be improved and their security ensured.”

However, Aydin Selcen, Turkey’s former consul general at Erbil — the capital of Iraqi Kurdistan — questioned the Turkish government’s logic. “To open a crossing at Ovakoy was on the agenda in 2003, when Turkey’s deployment of troops to Iraq was being discussed. Ankara couldn’t accept that the entirety of the Iraq-Turkey border had gone under control of the Kurdistan Democratic Party after 1991 and that Habur had become the Kurds' major source of revenue. The same realities exist today,” he told Al-Monitor.

On the new route that bypasses Zakho and Dahuk are the areas of Rabia, Zumar and Sinjar, all of which are under KRG control. It's highly unlikely that Erbil will give up those areas for a new route that aims to starve Iraqi Kurdistan. Even if the corridor were opened, significant military deployment would be required to ensure the security of the new road. It's not clear yet whether Ankara thinks that would be an acceptable risk.

In 2016, Turkey exported $7.6 billion worth of goods (5.4% of its total exports) to Iraq, making Iraq the third-largest export market for Turkey. In the first eight months of 2017, Turkey’s exports to Iraq had already reached $5.6 billion. In 2013, before the Islamic State (IS) occupied Mosul, Turkey’s annual exports to Iraq totaled about $12 billion.

Every year, Turkish exporters dispatch about 700,000 trucks and semis through Habur crossing into Iraq. The economies of several Turkish provinces near the border depend heavily on trade with Iraq. It's estimated that 45% of the goods passing through Habur are sold in Kurdistan and the remaining in the rest of Iraq.

Is Turkey’s sole goal to impose a blockade and deny Kurdistan its lucrative customs revenues? Could this new project turn out to be more than a simple border gate — perhaps the security corridor that Ankara has long considered to influence developments in Iraq?

Hasn’t Ankara always thought of entering Iraq from Turkey’s Silopi and intervening at Mosul and Tal Afar on the pretext of protecting Turkmens in those towns and in Kirkuk? Last year, Ankara developed numerous scenarios to exclude the YPG in Syria and Popular Mobilization Units in Iraq from operations in the region, and lately to minimize the increasing role of the Kurdistan Workers Party (PKK) in Sinjar. Turkey is now seriously concerned by the possibility of the PKK increasing its dominance of Kirkuk should there be an IS move against the city.

The language used in commentaries by pro-government media also reveals that Turkey’s intentions go far beyond opening a new crossing. The Yeni Safak daily reported that KRG President Massoud Barzani has "expanded the autonomous region allotted to him by the Iraqi Constitution in 2005 by 80%" in the past 13 years.

"Since then, 1,500 locations — including Kirkuk, Mosul, Tuz Khormato, Diyala and Sinjar — were occupied by [Kurdish forces]. Ankara and Baghdad are expected to intervene in this region, which is officially Iraqi territory," the newspaper said.

The same newspaper wrote that the PKK has turned Sinjar into a "second Qandil mountain" — a refuge for Kurdish militants — and has full control of Kirkuk. The article said Turkey now sees peshmerga forces as being as dangerous as the PKK. “Turkish soldiers who are continuing with preparations for an operation in northern Iraq now also see the Barzani forces, which have been tolerating the PKK, as a threat against Turkey. When the operation starts, peshmerga who approach Turkish bases will be neutralized just like the PKK," the newspaper reported.

According to the Turkiye daily newspaper, a joint intervention with the Iraqi army is planned for after Oct. 12 to wrest the disputed areas in the Ovakoy region from Kurdish control. “The Iraqi army is expected to participate in this operation with 13,000 troops. … The Turkish army will not enter Iraq in the first phase. There is the likelihood of setting up a Turkish military base on the Semelka-Fish Habur line to secure the lives and properties of Turks. Bashiqa base will also be a part of the operation,” the newspaper said.

In his address to top commanders when the parliament reconvened Oct. 1, Erdogan said, “We have to be ready for all eventualities.” The generals’ collective response — “We are ready” — signals that Ankara is waiting for the right time to intervene in Iraq.