Baghdad insists on taking control of the Kurdistan Region's border crossings with Turkey and Iran, while authorities in Erbil refuse to hand them over to Baghdad. 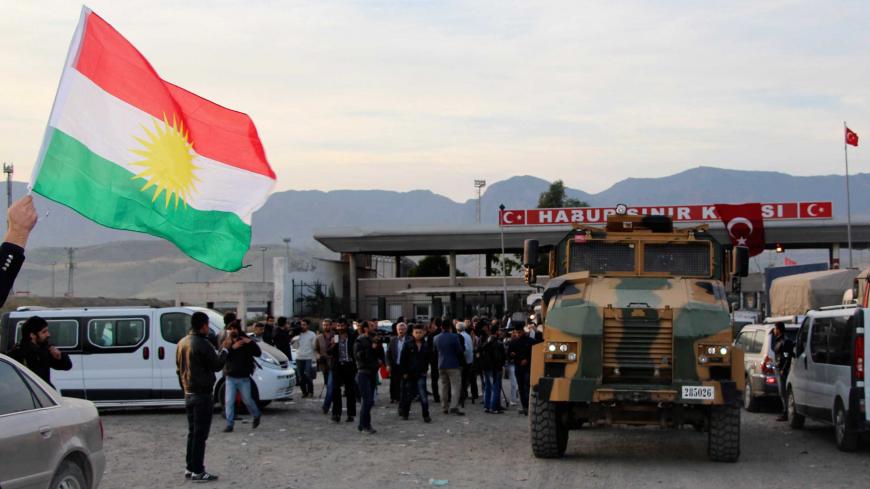 A man waves a Kurdish flag as a Turkish military truck escorts a convoy of peshmerga vehicles at the Habur border crossing between Turkey and Iraq, Oct. 29, 2014. - REUTERS/Kadir Baris

BAGHDAD — In a Nov. 14 press conference, Iraqi Prime Minister Haider al-Abadi warned the Kurdistan Regional Government (KRG) authorities that he will not wait long to take control of the Kurdistan region's border crossings with Turkey and Iran. “We will regain control of border areas without escalation. But our patience will run out. We will not wait forever. We will take action,” Abadi said.

Turkish Minister of Customs and Trade Bulent Tufenkci ssid previously that his country has reached an agreement with Iraq’s central government to open a border crossing through Ovakoy in Sirnak province, southeast Turkey. Being out of the reach of the Iraqi Kurdistan Region, the crossing in Ovakoy is a strong economic and political blow to Kurdistan Region authorities.

The border dispute is a result of the desire of Baghdad, Turkey and Iran to keep Kurdish influence at bay. Kurdish authorities have been delaying the handover of the borders, and the Iraqi forces have threatened to start operations to gain control over the crossings.

The Popular Mobilization Units have expressed interest in reclaiming the crossing, which would connect them with their allies in Syria. Moreover, the location links the Kirkuk-Ceyhan oil pipeline to Turkey and acts as an important and lucrative economic passage between Iraq and its neighbors.

In addition to the crossing’s great economic value to Turkey, Ankara is concerned that it could potentially connect the Kurds in Syria and Iraq, which would facilitate support to the Kurdistan Workers Party (PKK) in its battle against Turkey.

Located close to Faysh Khabur and within the Iraqi Kurdistan Region since 1991, the Ibrahim Khalil border crossing (Habur) has been the only border crossing between Iraq and Turkey. Kurdish forces took control of this crossing after Saddam Hussein invaded Kuwait.

The Kurds benefited from intraregional trade through the Ibrahim Khalil crossing and gained high revenues amounting to $6 billion per year.

Up until Nov. 7, the Ibrahim Khalil crossing had been under total KRG control; Iraqi and Turkish forces reached the Faysh Khabur border crossing 7 kilometers (4 miles) away ct. 31.

Jasim Mohammed Jaafar, a member of parliament who is close to Abadi, clarified the military and administrative situation. He told Al-Monitor, “What the media has reported concerning the total control of the federal forces at the Ibrahim Khalil and Faysh Khabur crossings is false.” He added, “The Turkish and Iraqi federal forces control the Ibrahim Khalil crossing point from the Turkish end, while the Kurdish forces remain at the other end, and they are refusing to hand over the crossing’s administration, tax funds and customs data to the federal authorities.”

Jaafar describes the situation in Faysh Khabur as follows, “The Kurdish and Iraqi Federal authorities are still experiencing problems at the crossing from the Kurdish end, and the bridge leading to the crossing located 5 kilometers (3 miles) away is still controlled by the Kurdish peshmerga forces.”

Jaafar continued, “If the Iraqi Kurdistan region insists on occupying the crossing, the Iraqi federal government will have no other option than resorting to force to open the gates at the crossing.”

The minister said, “On Nov. 3, common security committees were created under the patronage of the US in order to deploy mixed peshmerga and Iraqi forces in Faysh Khabur.” He considers that “the situation will not last forever given the Kurdish unconstitutional behavior.”

Currently, the results of the agreements and security developments are not affecting trade. Ali al-Kaabi, an Iraqi businessman working in the Jamila section of Baghdad, told Al-Monitor, “I received a shipment of imported goods from Turkey on Nov. 9,” and he affirmed that “transit truck drivers have not encountered any changes across the route.”

Al-Monitor met with a number of truck drivers. One of them told Al-Monitor on condition of anonymity that some “trucks will be making major changes to their routes in the near future in order to avoid the Iraqi Kurdistan region.”

He added, “Truck drivers have started taking the Tal Afar route [from Ibrahim Khalil] to Mosul, which is almost 160 kilometers (100 miles) long." It only briefly passes though the Iraqi Kurdistan Region; the more direct route, through Dahuk, is only 130 kilometers, but goes through much more KRG territory,

The truck driver continued, "It’s a sign that trade routes far from Kurdistan will be used. Such routes were prosperous in the 1990s … but they lost their popularity due to the Gulf War and the threats of the Islamic State [IS].”

Iskandar Witwit, an Iraqi lawmaker and a member of the parliamentary security committee, told Al-Monitor, “We are proceeding with the measures to distance [the KRG] from border crossings and stop using the Ibrahim Khalil crossing. We will end up using new crossings altogether.”

Witwit pointed out the political significance of holding power over the crossing by saying, “This crossing will marginalize the Iraqi Kurdistan region in terms of intraregional trade, and it will allow the Iraqi and Turkish forces to communicate better without Kurdish interference and entirely control oil exportation operations from the north, Kirkuk and Mosul.”

He continued, “A close examination of the map clarifies how the regions spread across the western side of the Tigris River would act as points of connection with Turkey and Syria through set border crossings especially since the Iraqi forces have also freed the Qaim border crossing. This guarantees a connection between Syria and Iraq, isolates IS, and cuts contact between the PKK and the Kurds in Iraq.”

The overall developments reveal that there will be ongoing steps toward the regional and international isolation of the Iraqi Kurdistan region. Losing control over border crossings, following the federal forces takeover of Kirkuk’s oil Oct. 17, could place the Iraqi Kurdistan Region in a major economic crisis that could put an end to its separatist dreams.