Turkey’s paradox in Iraq: Weaker because of a weakened Kurdistan

Turkey enjoyed the influence it wielded in Iraq because of its ties with the Kurdistan Regional Government, but it would rather see the KRG fall than risk an independent Iraqi Kurdistan inspiring Turkey's Kurds to seek the same. 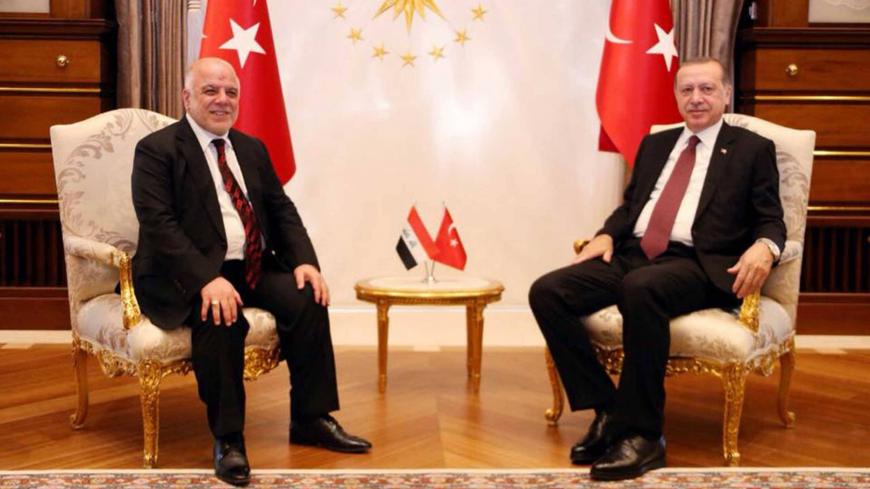 The sight was vivid proof of how quickly and dramatically the sands of Middle East politics can shift: the smiling faces of Turkey’s President Recep Tayyip Erdogan and Iraqi Prime Minister Haider al-Abadi in front of the cameras Oct. 25, seated under the flags of their respective countries in Erdogan’s pompous palace in Ankara.

It was only a year ago, on Oct. 11, 2016, that Abadi had called for the withdrawal of Turkish troops from Bashiqa, near Mosul, voicing his worry that “the adventurism of Turks could lead to a regional war.” In response, Erdogan had roared, “You are not my interlocutor, you are not at my level, your quality is not at my level." The president went on to say that the Iraqi premier’s “clamoring from Iraq” wasn't important, warning him to “know your limits.”

These harsh words were well out of bounds. If any head of state had said that in the 19th century, it would have served as a pretext to war.

But, there they were this week in Ankara, seated tete a tete, looking like equals, seemingly in full solidarity against Iraqi Kurdistan Regional Government (KRG) President Massoud Barzani — Erdogan's one-time pal and oil-dealing partner.

Baghdad has demanded that Iraqi Kurdistan oil exports come under federal control. Erdogan pledged Turkey’s support to Iraq's central government in Baghdad and said it would continue to export Kirkuk oil — but now for Baghdad instead of the KRG in Erbil — in the wake of the Sept. 25 Kurdish independence referendum and ongoing battles this month.

Abadi was accompanied on his visit by his ministers for oil, interior, electricity and planning, as well as the national security adviser. He commended Turkey for its support against the referendum.

“Turkey stood by our side against efforts to divide Iraq by the leaders of the Kurdistan region,” he said.

After their meeting, Erdogan told Abadi that Ankara will provide “every kind of support” to Iraq to repair and reopen a pipeline that was destroyed by the Islamic State in 2014. Yet, that's easier said than done. Experts say the repair process will take at least two years and cost millions of dollars. With its progressively weakening economy, especially after recent problems with Germany and the EU, it's unclear how Turkey could make such a huge contribution.

Abadi also met with Turkish Prime Minister Binali Yildirim, who pledged to help Baghdad take control of the Kurdistan region's border with Turkey. “We will provide the necessary support to the central government for them to hand over the administration of Habur-Ibrahim Khalil border crossing,” Yildirim said.

The Habur crossing is a lifeline for Iraqi Kurdistan, especially for the Kurdistan Democrat Party led by the Barzani family. If Iraq's central government takes over its control, the KRG's survival would be at Baghdad's mercy. Habur crossing, which provides the Kurds with income from taxes and crossing fees, has been under Kurdish control since 1991, when UN Security Council resolutions curtailed Saddam Hussein’s authority.

Habur is only 18 miles (30 kilometers) away from Fish-Khabur, where Baghdad recently began to deploy troops. The Kurds' possible loss of Fish-Khabur would also allow Turkey and Iraq to open a new border crossing in Ovakoy.

An Iraqi Oil Report analysis published Oct. 25 said, “If the federal government were to seize Fish-Khabur, it would sever the direct oil pipeline link between Iraqi Kurdistan and Turkey, effectively undercutting the KRG's ability to export oil without Baghdad's consent. It is not clear whether Abadi has authorized an operation to seize Fish-Khabour."

In response to the developments in Kirkuk and Fish-Khabur, the KRG government issued a statement in which it called for:

However, even such a dramatic step back did not seem to impress either Baghdad or Ankara, which had both demanded that the referendum not be held at all.

Yildirim brought that up at the joint press conference with Abadi. As if talking to KRG leaders, he said, “Why did you insist on this mistake [holding the referendum only to meet with defeat]? Why didn’t you listen to Turkey’s advice?”

​These stances show how precarious the situation has become for Barzani and his political party. They appear to have lost all bargaining power and leverage in the matter. One opposition party has already called for Barzani to step down.

Meanwhile, the Badr Organization, an Iraqi political party heavily influenced by Iran, has its militia operating under the Popular Mobilization Units, which is an Iraqi force that is also strongly motivated by Iran. The forces are positioned an hour’s drive from Fish-Khabur. Thus all indicators point to Iran, not Turkey, as the one calling the shots in the areas surrounding Iraqi Kurdistan.

In the past, Turkey’s weight and strength in Iraq had mainly relied on its strong ties with the KRG. There lies Turkey’s dilemma: As the KRG weakens, Turkey’s influence in Iraq also weakens.

But then, such paradoxes are familiar in the Middle Eastern political landscape.