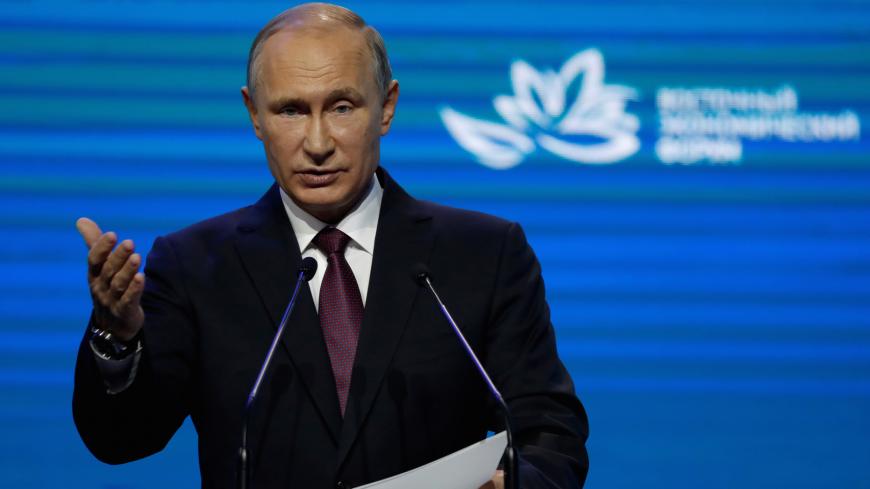 Russian President Vladimir Putin delivers a speech during a session of the Eastern Economic Forum in Vladivostok, Russia, Sept. 7, 2017.

Russian steps, US misstep, in Iraq

Russian President Vladimir Putin repositioned himself as a key broker of Iraqi energy politics last week, while US Secretary of State Rex Tillerson was scolded by the Iraqi government for his comments about Iraq’s Popular Mobilization Units (PMU).

Given America’s history and assets in Iraq, it seems a reach that Russia could be outflanking the United States in Iraq, as we suggested last week. But while Putin choreographs each move with a wary and calculating eye on Iran and the ever-shifting regional landscape, the United States limits its options by seeing every Iranian move as adversarial and in zero-sum terms, which only serves to frustrate Iraqi Prime Minister Haider al-Abadi, who prefers that the United States and Iran not play out their hostility in Iraq.

So in the same week that Tillerson earned a rebuke from Abadi’s office for saying “Iranian militias in Iraq” should “go home” — the prime minister’s statement termed the PMU “Iraqi patriots” — Iraq and Russia signed an expansive energy and economic protocol. The agreement opened discussions of more favorable terms for Russian companies and contractors in Iraq involving electricity and hydropower plants, oil and gas fields, equipment and supplies. The protocol touched on Russian soft loans in support of these projects as long as Russia has the lead in building and running these plants and operations.

In addition to the Iraqi-Russian protocol, Rosneft announced that it would begin exploration and pilot production of its fields in Iraqi Kurdistan, which proved a minor irritant during Iraqi Foreign Minister Ibrahim al-Jaafari’s visit to Moscow on Oct. 23-25, as Marianna Belenkaya reports.

But the Rosneft announcement was a mere blip, given the headline that Putin, with both moves, has now completely reset his ties with Iraq, as we presaged here last week. Russia is accepting that the action on energy deals is through Baghdad, although it will keep its leverage with the Kurdistan Regional Government (KRG), whose role and influence continues to be rolled back by Iraqi federal forces.

“Russia has made its deals with Kurdistan, so it is going to negotiate with any party that can affect the situation — including Baghdad and Erbil, and possibly Ankara or Tehran,” writes Belenkaya. “But there is much more going on between Moscow and Baghdad than the latter's dispute with Kurdistan. Baghdad needs foreign investments to revive the territories damaged in the war against IS, so it certainly won't pressure Moscow to choose between Baghdad and Erbil. Iraq and Russia already discuss cooperation in a variety of fields, such as electriсity, industry, agriculture and construction. The countries collaborate closely on military technology. In 2014, they signed a weapons contract worth more than $4 billion. Russian specialists teach and train Iraqi military officers.”

Iraq “highly values that Russia respects its domestic and foreign policies, never demanding that Iraq should work with certain countries and not others,” Belenkaya adds. “Moscow and Baghdad have the same opinion on both the fight against terrorism and the Syrian civil war. They navigate between the two Middle Eastern power centers — Tehran and Riyadh — in the same way, seeking to avoid controversy.”

A heavy US hand with Abadi only serves to make his life more difficult in finding a balance between the United States and Iran. Iran’s influence in Iraq, including the Kirkuk region, is unmatched and growing. Fazel Hawramy writes that “local Kurdish residents and the PUK [Patriotic Union of Kurdistan] leadership alike say that Iran has unparalleled influence with the Shiite Turkmens in the area [of Kirkuk]. One senior Islamic Revolutionary Guard Corps (IRGC) operative who is said to have played a crucial role in the Kirkuk region for at least the past decade is Haj Ali Eqbalpour, known by the locals in Tuz Khormato as 'Mr. Eqbali.'"

Amberin Zaman writes, “Turkey has left much of the initiative to Iran” in Iraq, adding that “it remains unclear whether Ankara would back further military action against the Kurds at its border, but Turkish officials have made no secret of their desire to see Baghdad reimpose federal authority over its border areas and has floated various plans.”

On Oct. 29, Iraqi federal forces took control of the Fishkabur border crossing, a vital hub for Iraqi energy exports. In Fishkabur and elsewhere, Abadi has displayed little interest in compromise with the KRG, seeking instead a complete reversal of the referendum and permanent Iraqi authority over its energy resources and outlets.

The disastrous independence referendum and emboldened Iraqi advance forced the resignation of Iraqi Kurdistan President Massoud Barzani also on Oct. 29. Barzani, who will still lead the region’s high political council, called for his authorities to be divided among the prime minister, parliament and judiciary. As Zaman wrote last week, a face-saving transfer had been in the works that, in addition to Barzani stepping down as president, could “hand power to his nephew, [KRG] Prime Minister Nechirvan Barzani.”

Barzani’s Kurdistan Democratic Party (KDP) has sought to rally supporters and American friends by saying that Abadi’s moves are the initiative of the “Iranian-backed” PMU and by claiming that the rival Patriotic Union of Kurdistan “sold out” to Tehran. While some may rally to these banners, the bottom line is that Barzani had become a liability for the KDP’s post-referendum rehabilitation. Whether Nechirvan Barzani can cobble together a new constituency is an open question. Another influential player will be former KRG Prime Minister and Iraq Deputy Prime Minister Barham Salih, who has staked out an independent tack, in addition to maintaining close ties to the Iraqi leadership, the United States and Iran, as Fazel Hawramy reported last month.

Cengiz Candar suggests that the turn of events in Iraq may serve to weaken, not strengthen, Turkish influence, especially relative to Iran. Recounting Turkish President Recep Tayyip Erdogan’s dismissive comments about Abadi just one year ago, when Erdogan refused the Iraqi prime minister’s demands to withdraw Turkish troops from Bashiqa, Iraq, Candar writes that “these harsh words were well out of bounds. If any head of state had said that in the 19th century, it would have served as a pretext to war. … But, there they were this week in Ankara, seated tete-a-tete, looking like equals, seemingly in full solidarity against Iraqi Kurdistan Regional Government (KRG) President Massoud Barzani — Erdogan's one-time pal and oil-dealing partner.”

The crisis over Kirkuk also has consequences for an Iran-Russia-Turkey energy deal reached in August. The military action by Iraqi forces, writes Olgu Okumus, “immediately caused an oil transport slowdown in the Kirkuk-Ceyhan pipeline, in turn opening a gap in the regional market that could easily benefit from the joint Iranian, Russian and Turkish deal announced in August for exploiting Iran‘s oil and gas resources. The question now is how this deal will hold up, given the constraints and threat of sanctions on Iran, and the ongoing case in New York of Reza Zarrab, a Turkish businessman accused of helping Iran evade sanctions.”

“As the Erbil-Baghdad tension over Kirkuk energy sources continues to grow, it is paving the way for increased Iranian oil exports, a currency swap, an oil-for-goods program and increased banking cooperation — all of which signal new efforts to counter US sanctions, as the previous Turkey-Iran gold trade arrangement was wiped out,” writes Okumus. “The most salient element of this is a deal that will certainly support Iran's efforts to reach its ambitious export target of signing $50 billion to $60 billion worth of oil and gas contracts with foreign companies by March 20, the end of the current Iranian year.”

It is then no surprise that all eyes will again be on Putin, who visits Tehran on Nov. 1 for a trilateral summit with Iranian President Hassan Rouhani and Azerbaijani President Ilham Aliyev.

As the United States considers the transition to Raqqa and other areas liberated from the Islamic State (IS) in Syria, there are signs that the United States may have to accept that Syria, backed by Russia and Iran, will have the edge with regard to post-conflict governance.

This already appears to be happening, as Moscow and Damascus have put forward their own plan for a decentralized approach to the Syrian Kurdish regions.

Although the Syrian Democratic Forces (SDF) are the United States' on-the-ground partner against IS, that has not stopped Syria and Russia from seizing the diplomatic initiative.

The Syrian Kurds “are preparing to form a united delegation to negotiate with the Damascus government the formation of a federal state across Syria,” writes Mohammad Bassiki.

The Democratic Union Party (PYD) is the political arm of the People’s Protection Units (YPG), which is the majority and core force of the SDF.

Bassiki says the PYD “considers the statements of Syrian Foreign Minister Walid Moallem regarding the possibility of negotiating a potential Kurdish self-rule as ‘a progressive step,’ despite being overdue. Moallem’s statement on RT TV on Sept. 25 strayed from the typical approach of the Baath Party, which believes in the unity of all Syrian territories and a central rule. Still, his statement was in line with the Syrian regime’s ally, Russia, about establishing a federal Syrian state, all the while maintaining the country’s unity.”

“Perhaps Moallem’s statement may merely be a political game to pressure opposition-backer Turkey, which opposes the self-rule demands, to make political concessions in favor of Damascus and at the expense of the political and military opposition,” Bassiki continues. “The statement may also mean that Damascus is testing the waters with Russia and Iran, Syria’s closest allies, regarding a federal state.”

Bassiki adds, “With Raqqa’s liberation Oct. 20 and the Syrian Democratic Forces and Arab-Kurdish alliance announcing that the city would become part of ‘a decentralized federal Syria,’ the PYD and its allies seem to have effectively annexed the province to the federal area and benefited from Russia’s warming up to the idea and from the Syrian regime’s implicit approval of the decentralized rule — or at least its willingness to negotiate.”