Baghdad's row with Ankara could benefit each side

Turkey’s latest military operation against Kurdish militants based in northern Iraq has triggered harsh reactions from Baghdad but also opened room for dialogue between the militaries of the two sides. 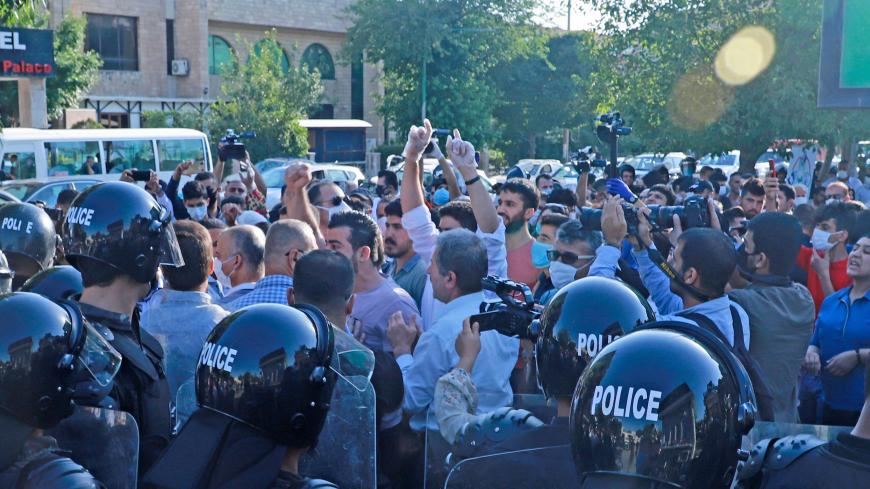 Iraqi Kurds, some of them wearing protective masks due to COVID-19, march during a demonstration to denounce the Turkish assault in northern Iraq, in Sulaimaniyah, in the Kurdish autonomous region of northern Iraq, on June 18, 2020. - SHWAN MOHAMMED/AFP via Getty Images

Turkey’s drive to establish a “security corridor” against Kurdish groups along its southern borders — all the way from Afrin in northwestern Syria to the Qandil mountains in northeastern Iraq — is unfazed despite military and political predicaments. Since mid-June, the Turkish military has been targeting Kurdish militant bases in northern Iraq in operations dubbed Claw-Eagle and Claw-Tiger, following operations Claw-1-2-3 conducted last year, along with Operation Peace Spring in the enclave between Tell Abyad and Ras al-Ain in Syria.

The ongoing onslaught against the outlawed Kurdistan Workers Party (PKK), which has relied on bases in northern Iraq in its long-running armed campaign against Ankara, stands out from previous operations in terms of its implications on the ground and the reactions it has provoked. Turkey has targeted the PKK inside Iraq since the 1990s.

The latest operation, launched June 15, saw Turkish forces quickly expand the number of their bases as tensions escalated with both the Kurdistan Regional Government (KRG), which runs the area, and the central government in Baghdad.

The campaign targets not only the areas of Qandil, Zap, Avasin-Basyan, Gara and Hakurk, where PKK camps are located, but also the Yazidi-populated Sinjar and the Makhmour camp near Kirkuk, which is home to Kurdish refugees from Turkey. According to Kurdish sources, the Turkish forces have pushed forward 50 kilometers (30 miles) inside Iraqi Kurdistan, setting up 12 new bases and checkpoints. A map released by Turkey’s communication directorate July 6 shows a Turkish military presence at 37 sites, up from 24 in June.

According to Turkey’s Defense Ministry, more than 500 PKK targets were hit in the first 36 hours of the operation with F-16 jets, drones and howitzers. As of the end of June, their number stood at over 700.

Village evacuations and civilian casualties have turned up pressure on the KRG, while the reactions of the Baghdad government, in which the Kurds are represented, have been tougher than Ankara expected. The Iraqi Foreign Ministry has twice summoned the Turkish ambassador in protest and warned Iraq may take the issue to the Arab League, the Organization of Islamic Cooperation and the UN Security Council. It has also threatened economic sanctions against Turkey, urging the withdrawal of Turkish forces from all the sites they occupy, including the Bashiqa base near Mosul.

The Kurdistan administration may be irked by the PKK’s growing influence in the region, but can ill afford to ignore public pressure against Turkey’s military actions. The Kurdish parliament set up four commissions to examine the situation in border regions.

At least 27 civilians have been killed in areas bombed by Turkey in the past three years.

The changing Arab attitude on Turkish strikes inside Iraq is noteworthy after years of letting Ankara have its way against the PKK.

Turkey’s rivalries with Egypt, Saudi Arabia and the United Arab Emirates have markedly heightened in recent years, leading the Arab League to grow more vocal against rising Turkish influence in the Middle East and North Africa. The Arab League has accused Turkey of violating Iraq’s sovereignty and pursuing expansionist ambitions. The changing Arab attitude has served Kurdish interests while also swaying the Sunni actors Ankara used to see as natural conduits of its regional influence until several years ago. As a result, Sunnis aligned with the Saudi-Emirate axis have come to avoid collaboration with Turkey.

Yet, how far can Ankara and Baghdad's bilateral ties be strained? The warnings of the new Iraqi government led by Prime Minister Mustafa al-Kadhimi are in line with the hardening Arab sentiment toward Turkey, but do they mean that Baghdad could risk the collapse of relations with Ankara?

On June 11, four days before Turkey’s latest cross-border move, Turkish intelligence chief Hakan Fidan traveled to Baghdad to meet with officials from Kadhimi’s government. According to information obtained by Al-Monitor, Kadhimi, who is on good terms with the Kurds, was reluctant to greenlight a fresh Turkish operation as the tussle between the United States and Iran is already shaking Iraq. Turkey launched the operation anyway.

Still, many quarters in Iraq would have no interest in falling out with Turkey at a time when curbing Iranian influence in the country has fueled the biggest of rows. Nevertheless, Kadhimi is compelled to pay attention to growing public sensitivity over the erosion of Iraq’s sovereignty as well as the swelling anger among Kurds.

Baghdad’s reactions aside, Turkish-Kurdish tensions have produced the remarkable side effect of strengthening Baghdad’s hand vis-à-vis Kurdistan. Turkey’s fury with the project for an independent Kurdistan and the PKK’s expanding influence in the region is indirectly laying the ground for Baghdad’s return to Kurdistan.

Turkey’s latest military operation provided an opportunity for Baghdad to deploy forces along the Turkish border in Kurdistan, albeit in small, symbolic numbers. The central government sent senior military officials to Dahuk June 22 to visit the sites of Turkish strikes and meet with local officials and then stationed border guards at several localities around Zakho. Hamada Dizayee, the commander of the border guards, said Turkey had offered to cooperate on border security.

As part of its “anti-Kurdish corridor” plans, Turkey has offered also the creation of a second border crossing with Iraq to bypass the existing one, which opens into Iraqi Kurdistan. The proposed crossing, at Ovakoy on the Turkish side, would provide a route to Tel Afar and Mosul and allow Baghdad to reclaim some border control. The plan — designed after Iraqi Kurdistan’s failed independence referendum in 2017 — was thrown into limbo amid political instability in Baghdad, but Ankara has not given up on it. In any case, emerging opportunities for cooperation with central government forces at the border mesh with Turkey’s corridor plan.

At present, however, the return of central government forces to the border remains limited and far from swaying things on the ground. These border units are comprised mostly of Kurds, along with some Arabs and Turkmens.

Also, the success and sustainability of the corridor plan remain questionable in general. Turkey’s operations and bases are no doubt restricting the PKK’s movement, but experience shows that the sprawling size of the area and its rugged mountainous terrain stand in the way of definitive and lasting results.

Moreover, the PKK has become capable of organizing itself in urban areas over the years, both in Iraqi Kurdistan and in Syria, meaning that controlling mountain passes and stepping up drone surveillance, intelligence, surgical strikes and assassinations will not make the problem go away.