Storming of base in Iraq a grave signal for Turkey

A violent protest by locals at a Turkish military base in Iraqi Kurdistan heralds a challenging turning point for Turkey’s cross-border drive to combat Kurdish militants. 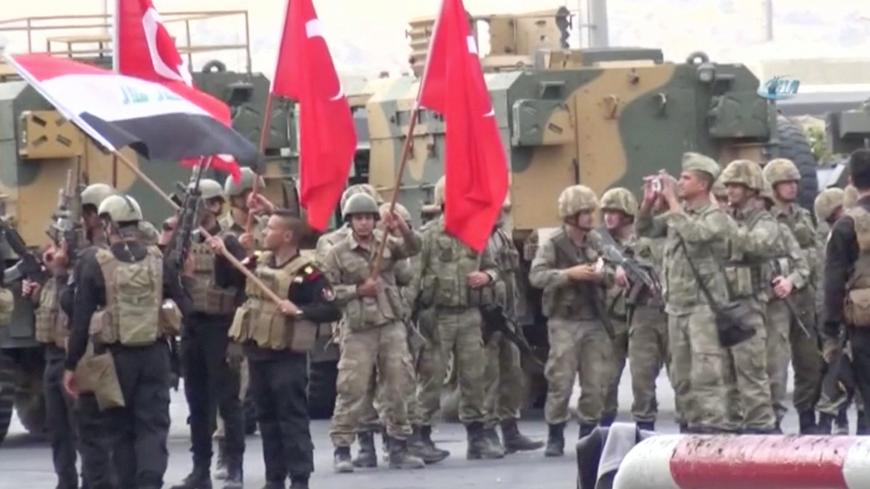 Iraqi and Turkish soldiers wave flags at the Habur border gate between Turkey and Iraq in this still image taken from video, Oct. 31, 2017. - IHA/ via REUTERS

As Turkey expands its operations against the Kurdistan Workers Party (PKK) in the region, its troops in northern Iraq are facing, for the first time, violent protests by local Kurds, who are infuriated over civilian casualties in the air raids.

Bombings in the Deraluk region on Jan. 23-25 claimed six lives, bringing the civilian death toll from Turkish airstrikes to more than 20 in the past two years. On Jan. 26, angry relatives stormed a Turkish military base in Dahuk province, setting fire to two tanks, tents and equipment. The crowd called on Turkey to end the strikes and respect Kurdistan’s sovereignty, while also urging the PKK to leave the region. Things got out of hand as soldiers opened fire on the crowd, killing two protesters, aged 13 and 60, and wounding 15 others.

Turkish President Recep Tayyip Erdogan reacted in a threatening tone: “They attempted to do something wrong in northern Iraq today. Unmanned aerial vehicles and planes took off and all of them had to disperse. We will not give the right to live to those who aim at our peace and well-being, both at home and abroad.”

Defense Minister Hulusi Akar blamed the protest on the PKK, which Ankara considers a terrorist organization. “It was an incident orchestrated by the terrorists,” he said. “The terrorists are trying to pit local people against our armed forces.”

The Kurdistan government sought to assuage Ankara, promising to punish the “provocateurs” who, it said, were behind the unrest. Though Kurdish sources said the peshmerga were late to intervene, Akar was pleased with Erbil’s response. “We welcome the timely and comprehensive response of the Erbil administration and the measures they took,” he said.

Turkish military operations in northern Iraq date back decades. The cross-border campaigns began in 1983, followed by the establishment of permanent bases. It was through this military presence that the Turkish state pursued its interests in the region, while even the word “Kurdistan” was a no-no in its domestic and foreign policy, and diplomacy with Erbil was years away. The military swayed relations with Iraqi Kurds and Turkmens, sometimes through threats, sometimes through fine-tuning.

In 2010, Turkey finally opened a consulate in Erbil after taking steps to acknowledge Kurdistan, and political dossiers moved to the realm of diplomacy. The military field, however, continued to operate independent from diplomacy. The establishment of military bases in northern Iraq aimed to restrict the movements of the PKK, which has camps in the mountains of Qandil, Hakurk, Zap, Avasin, Metina, Haftanin and Gara. Yet the PKK continued to grow in Iraq, Iran and Syria, although Ankara continued to claim it was striking heavy blows on the group.

The Syrian conflict unleashed a chain of events that led Turkey to change its approach to cross-border operations. First, Syrian Kurds who align with the PKK took control of northern Syria in 2012. Then, from 2014 onward, the fight against the Islamic State (IS) in Iraq allowed the PKK to increase its clout in Shingal (Sinjar), Kirkuk, Makhmour and Jalawla, while on the Syrian side, the People’s Protection Units (YPG) opened a corridor to Shingal and secured a direct passage to Iraq through the Yarubiya-Rabia crossing.

In addition to its seizure of Afrin in northern Syria, Ankara is now threatening a similar offensive to the east of the Euphrates. Another plan, which remains on paper, has been considered for the Iraqi side, aimed at creating a security strip along Iraq’s border with Syria to prevent infiltrations. Ankara’s proposal to inaugurate a second border crossing with Iraq at the junction where the Turkish, Iraqi and Syrian borders meet was also part of this plan. In March 2018, Turkey embarked on creating a safe zone 15 kilometers deep into Iraqi territory in the Hakurk region to the east. Turkish planes have also bombed Shingal and the Makhmour refugee camp amid warnings that Ankara will not allow “a new Qandil” — a reference to the PKK’s headquarters in the Qandil Mountains.

Over the past several years, Turkey has intensified its use of drones, hoping that pinpoint strikes will inflict greater damage on the PKK. At the same time, however, it has faced mounting objections both from the Iraqi Kurds and Baghdad. Ankara calls for the PKK’s expulsion from the region and says its cross-border actions will continue as long as the PKK continues to use Iraqi soil. At present, however, both the Kurdistan Regional Government (KRG) and Baghdad lack the capacity to root out the PKK. Moreover, peshmerga forces already tried to do this repeatedly, with Turkey’s support, in the 1990s.

Not only locals, but political parties in Kurdistan, are angry over the civilian deaths, which inevitably put the KRG under pressure. The Kurdistan Democratic Party (KDP), the dominant force of the region, maintains its anti-PKK stance, but Kurds are averse to the prospect of another fratricide for the sake of good ties with Turkey. Since the PKK’s abduction of Turkish intelligence officers near Sulaimaniyah in 2017, the Patriotic Union of Kurdistan, which controls the region, has come under increased pressure from Ankara. It has since stepped up measures against the PKK, but it, too, is deeply irked by Turkey’s military operations.

After the Syrian Kurds’ drive for self-rule, the KDP acquiesced to Turkish demands to blockade Rojava, which led to major rifts in Kurdistan politics. But despite such moves pleasing Turkey and strengthening economic bonds, Iraqi Kurds got no understanding from Ankara over their independence referendum in 2017. Ankara joined hands with Tehran and Baghdad to squeeze Kurdistan and make it regret the referendum. Lastly, Turkey’s breakup of the self-rule in Afrin further embittered the Kurds.

Commenting on the storming of the Turkish camp, an Erbil-based Kurdish journalist, who asked for anonymity, told Al-Monitor, “Curiously, the KDP did not intervene timely. This puts a question mark in the minds. They might be thinking of shaping some policy out of this incident, like starting a campaign via the Iraqi government for the PKK and Turkish troops to go.”

The areas targeted by Turkey are inhabited by Kurdish tribes hostile to the KDP, which sided with Baghdad against the KDP even under Saddam Hussein. In the 1990s, when the KDP fought the PKK alongside Turkey, the local Kurds stood aloof. Now, Islamist movements have gained strength in the impoverished area. Given this political climate, disparate positions and reactions should not come as a surprise down the road.

The storming of the camp — an unprecedented reaction to Turkey’s military operations — is a sign of what could be in store for Ankara.

Aydin Selcen, a former diplomat and now a columnist for an online journal, sees the storming of the base as a major event that might even be a “watershed.” According to Selcen, an abrupt disruption of security cooperation between the KDP and the Turkish army, or the rise of popular resistance against Turkey’s military presence, is unlikely, but the protest will not go without consequences. “Both the KDP’s belated, meek and timid intervention and Akar’s ambiguous remarks show that this civilian protest in a remote border town in the KRG, backed by tribes which are hostile to both the KDP and the PKK, has achieved its objective,” Selcen told Al-Monitor. “The protest took both Ankara and Erbil aback. Also, it put Baghdad and Erbil at odds and opened rifts between the KDP and other political parties in the KRG and even between prominent members of the KDP itself.”

Asked about the prospect of any change in Ankara’s policies, Selcen said, “We’ve seen once again the limits of security-centered policies and narrow political visions. Still, Ankara will continue on the same path, putting on a brave face, and Erbil will try to brush over the issue with communication tactics.”

In Baghdad, the Iraqi Foreign Ministry responded by summoning the Turkish ambassador and handing him a protest note. It condemned actions violating Iraq’s sovereignty as well as “the use of its territory to attack the security and safety of any neighboring country.”

The evacuation of Turkish bases in Iraq, including the Bashiqa camp near Mosul, is now bound to top the agenda of bilateral contacts in the coming period. The issue has become the main stumbling block in efforts to normalize ties with Iraq. The more the Baghdad government asserts its control and wraps up the fight against IS, the sharper the reactions against Turkey’s military presence. Obviously, the Iraqi government is incapable of forcibly closing the Turkish bases or dismantling the PKK camps, which are scattered across hundreds of kilometers along the country’s borders with Turkey and Iran. Any showdown on the issue might further fan anti-Turkish sentiments in Iraq, which came to the fore when Turkey refused to evacuate the Bashiqa camp in 2017. Such tensions could cast doubt on Turkey’s interests and deterrence claims.